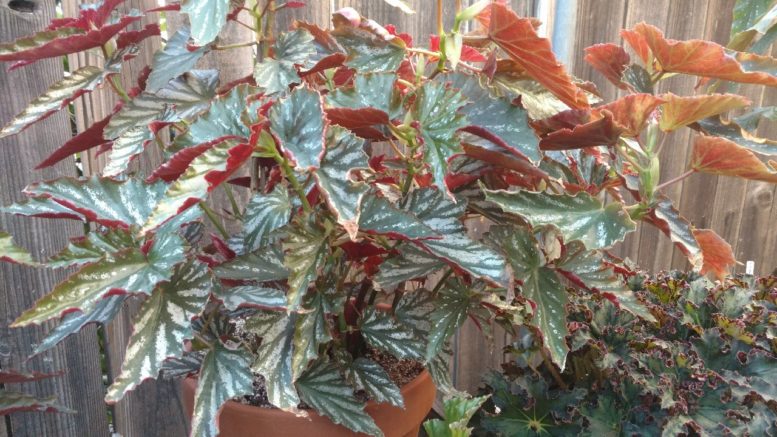 Begonias come in a wide range of species such as this angel wing variety from Wendy Corby’s collection. (Photo by Debbie Arrington)

For the first time in 41 years, Sacramento is the Begonia Capital.

Begonia lovers from throughout the country have gathered at the Crowne Plaza Hotel to talk plants, discuss the virtues of tuberous versus rhizomatous and discover varieties they’ve never seen.

Attracting begonia experts from around the globe, Sacramento hosts the American Begonia Society’s 2019 national convention, which includes a huge judged show as well as an equally impressive plant sale. Both the show and sale are open free to the public Saturday, Sept. 7.

In lieu of its own annual Sacramento show and sale (usually held this weekend at the Shepard Garden and Arts Center), the society’s Joan Coulat Chapter—along with the San Francisco chapter—host this much bigger national event. The presentations started Monday and continue all week, culminating in Saturday’s public session.

Begonias have fans everywhere because there are so many different kinds, Corby said. With more than 1,800 species, it ranks among the largest and most diverse plant families on Earth.

“People will look at a plant and say, ‘That’s not a begonia!’” Corby said with a chuckle. “They’re just amazed how many varieties there are.”

Californians, in particular, are fond of begonias. The state has more chapters of the society than any other. “The reason they’re so popular here is we can grow them outdoors year round. Otherwise, you have to have a greenhouse or grow them indoors,” she said.

Corby, a network project analyst in the state’s Department of Technology, has been attracted to begonias since she was a teenager, accompanying her grandmother to society meetings. While many plant enthusiasts gravitate towards flowers, she went for the leaves.

“I love the foliage,” she said. “I like the big-leaf varieties, particularly the angel wings.”

Corby even has an angel wing begonia variety named after her: Lady Corby. (Of course, that’s her favorite.)

To tempt new begonia growers as well as add to enthusiasts’ collections, the local chapter brought in top-class plants from major nurseries and hybridizers for Saturday’s sale. That includes 300 plants from Kartuz Greenhouse in Vista and 800 from Warren’s Nursery in Los Osos. Dozens of hard-to-find miniature terrarium begonias will be available. Local growers also donated hundreds of their own propagated plants

In the flower world, begonias are enjoying a renaissance, Corby said. “They’re coming back in popularity. Many people say, ‘My grandmother grew that on her porch.’ Now, they want one, too. And after they get one begonia, they want to try more.”

Admission to the show and sale are free.

Be the first to comment on "All about begonias"