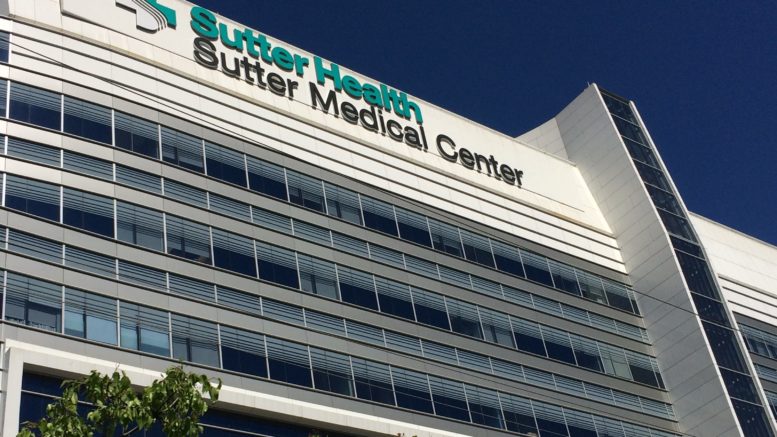 Sutter Medical Center in Midtown Sacramento has an assessed value of $504 million, but $462 million is exempt from property taxes. (Photo by Foon Rhee)

Sutter Health has a lot at stake in a groundbreaking antitrust lawsuit that appears headed to a showdown trial: Its market dominance in Northern California, its financial future, its reputation.

What isn’t in any immediate jeopardy—its nonprofit status that allows the Sacramento-based health care giant to avoid paying millions of dollars in local property taxes each year.

But if the allegations against Sutter Health are true, does it really deserve this generous tax break? If it’s guilty, instead of helping patients and serving the community, it’s price gouging the sick and increasing health care costs for everyone.

The antitrust lawsuit had been set for trial on Aug. 12, but has been postponed until Sept. 9. On June 7, a judge denied Sutter Health’s motion to dismiss the unreasonable restraint of trade allegations. On March 14, a San Francisco Superior Court judge denied Sutter’s motion to eliminate the claims of price tampering and combination to monopolize.

In 2017, Sutter reported net income of $893 million on $12.4 billion in revenue. For 2018, it reported $12.7 billion in operating revenue, but a $198 million net loss due to poor investment returns. Despite all that cash, Sutter Health is legally a nonprofit and eligible for tax exemptions on property used for hospital, charitable, religious or scientific purposes.

In Sacramento County, Sutter Health and its affiliates own buildings, land and property with an assessed tax value of an estimated $1.15 billion, according to numbers from the county Assessor’s Office through a public records request.

Asked for a comment on the tax break, Sutter Health instead sent a long list of its good works in the Sacramento Valley and a statement that its “deep commitment to the community is at the core of Sutter Health’s not-for-profit mission.” It says its contributions totaled $3.7 billion in the last five years, including $435 million last year in unreimbursed care for Medi-Cal patients.

Sutter Health, which operates in 18 other counties, is the largest hospital system in Northern California with 24 hospitals, 8,200 doctors and 48,000 employees. Because of its prominence, the industry’s increasing consolidation and the red-hot politics of health care, this lawsuit is getting a lot of attention.

It alleges that Sutter imposes “gag clauses” on prices, charges “punitively high” rates on out-of-network care and requires “all-or-nothing” contracts that force insurers to use its facilities. Studies have shown that hospital prices are significantly higher in Northern California than in Southern California, where there is more competition.

Sutter Health says it “will continue to vigorously defend against…the false claims. ” It says there is plenty of competition and says it is providing high-quality care while saving patients money.

The courts will judge if Sutter is breaking the rules. But a guilty verdict alone wouldn’t automatically affect its tax exemption, Sacramento County’s assessor says.

That’s the law, but it doesn’t seem quite right.

Be the first to comment on "Editor’s note: Sutter Health’s big tax break"