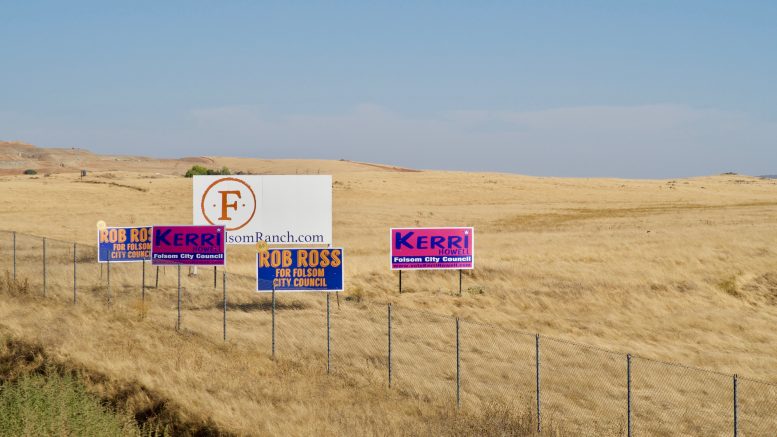 Developers for the controversial Folsom Ranch project have channeled thousands of dollars to their preferred political candidates, as well as toting their signage on their land along Highway 50. Photo by Scott Thomas Anderson.

Showered by developer cash camouflaged through a political action committee, the Folsom City Council has quietly led an aggressive annexation campaign that could impact traffic, air quality and wildlife in northeast Sacramento County for decades to come.

An SN&R analysis of campaign finance disclosures determined that landowners and developers tied to one of the most controversial plans in Folsom’s history—popularly known as the “South of 50” project—gave more than $20,000 to the Folsom Chamber of Commerce’s political action committee in the last three years, which in turn spent nearly three times that amount helping city council incumbents Kerri Howell, Steve Miklos, Andy Morin and Jeff Starsky win reelection.

Folsom’s election rules allowed its chamber to use the money in a way that’s mostly invisible on individual campaign records.

Additionally, according to campaign disclosure documents, Howell accepted $5,500 in direct contributions from donors tied to the South of 50 project during her failed supervisorial bid.

The South of 50 project is a series of different development agreements within the Folsom Plan Area Specific Plan, which was made possible by the city annexing nearly 3,600 acres of open space in 2012. The projects will collectively build on thousands of acres of grasslands and cattle ranges skirting Folsom’s border and the edges of El Dorado Hills, stretching toward Rancho Cordova. It will add roughly 11,000 homes and an estimated 23,000 more residents. The first project could break ground next year.

The Environmental Council of Sacramento has raised concerns about the plan, including the impacts on smog and traffic, the effects on hawks and migratory birds and—most prominently—its seeming reliance on a nonexistent stable source of water: The city council voted in 2013 to supply thousands of future residents of the development with surplus water from conservation efforts within Folsom’s perilous local supply.

“They overallocated their water,” said Matt Baker, land use and conservation policy director at ECOS. “They’ve really not provided any kind of plan for an event that could drastically reduce their supply in an extremely dry year.”

Howell, a professional civil engineer, disagrees with that assessment.

“They don’t know what they’re talking about,” she said of the watchdog group. Howell says she’s confident the city’s strategy of fixing leaks, implementing a tier-rate billing system and using conservation technology will make the numbers pencil out.

Despite opposition from ECOS and a significant number of Folsom residents, Howell, Miklos, Morin and Starsky have now voted for numerous resolutions moving the project forward. But voters combing through Folsom’s election documents in search of a monetary link between council members and developers tied to South of 50 may have trouble spotting it. That’s because a majority of the contributions—some $20,326 worth of them—were made to the city chamber’s PAC, the leadership of which then spent well in excess of that amount to support the four incumbents in the last three at-large elections.

Further muddying the picture, $48,339 of the $54,639 spent by the chamber PAC on the candidates was used in a way that doesn’t show up on individual California 460 forms. That’s because Folsom has an ordinance capping direct contributions at $150 per year. In other words, most of the money was spent on behalf of the council incumbents in the form of signs, mailers and ads, but not given directly to them.

In addition to netting $20,000 from South of 50 stakeholders, the Folsom Chamber’s PAC also collected at least $11,500 in additional contributions from other real estate groups and developers, which built on the total funds they could spend on the incumbents.

Marko Mlikotin, chairman of the chamber PAC’s board of directors, defends his group’s contributions by referencing a public vote on Measure W in 2004. The measure called for Folsom taking general control of the land South of 50 and gained steam after rumors spread that Rancho Cordova was planning the same.

“Measure W passed by 69 percent of the vote. … Development south of 50 is a reflection of what Folsom voters want,” Mlikotin said. “You’re asking about the last three election cycles, but South of 50 was determined a long time ago.”

The Folsom City Council is, however, still actively voting on numerous details of development agreements related to the South of 50 project.

Howell, Miklos, Starsky and Morin have all previously been questioned about the influence big developers have on them. Each has said contributions don’t play a role in their decision-making.

But for Roger Gaylord, a security consultant currently running against Starsky for city council, the dismissive attitude he sees Folsom’s incumbents show toward anyone raising concerns about the South of 50 project would trouble voters—if they knew.

“There is definitely a political ‘in crowd’ in Folsom,” Gaylord said. “And when I can see the president of [a home building company] who’s building in South of 50 giving donations to them, and then showing up a couple weeks later to make a presentation in front of the same council members, I call bullshit.”

Howell countered that while $20,000 given to the chamber’s PAC may sound like a lot, it’s not in the context of what elections actually cost.

“The successful Folsom City Council races in recent years are ones where each candidate’s raised about $15,000,” Howell pointed out. “If you talk to some of those South of 50 developers, they’ll tell you that, because I’m a civil engineer, I’m as tough on them as anyone.”

Gaylord claims he’s met countless residents while campaigning who don’t want the South of 50 project, and don’t understand why it’s moving forward. For him, the reason is clear.

“One of my main platforms is rejuvenating the city’s technological outreach, so young parents and working professionals can stay involved in the process,” Gaylord said. “The city council does nothing to reach out to them. … It’s not a mystery. They don’t want people to know what’s happening.”

According to the Folsom City Clerk’s office, Gaylord has so far raised $545 this year, all from residents.

Be the first to comment on "Folsom annexation blues"