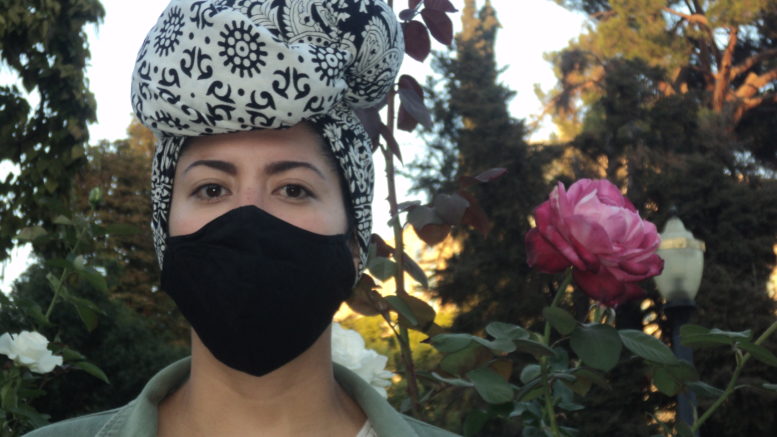 Rubie Simonsen, wearer of many hats, lost her favorite fedora months ago. To show solidarity with African Americans, she wore a stunning head wrap during a recent visit to Sacramento’s World Peace Rose Garden. Head wraps were first created by Black women who toiled in the sun. Photo by Edgar Sanchez

Rubie Simonsen has worn many hats.

The 30-year-old Sacramentan has been a yoga instructor, a community volunteer, a poet, a website designer and a youth program manager.

But the role Simonsen values most is being a young farmer – and imparting her knowledge of how to work the land without disrespecting it.

Whether people reside in the country or in a metropolis, “Mother Earth is always humming in the background, ensuring we have theright environment to live,” one of her poems says.

Another says: “Weeds happen … even if you have planted good seeds.” In other words, farming is tough, with no guarantees of prosperity.

In 2018, Simonsen taught 10 adults who had accepted that blunt concept to be ecologically sensitive farmers and to give back to their communities.

Consisting of 10 evening workshops spread over five weeks, the tuition-free class met at 252 Accelerator, an Oak Park academy that Simonsen launched as a one-year project with The California Endowment’s support. Upon graduation, the students interned for a year at area farms, their wages paid by The Endowment.

That class led to Simonsen donning a new hat. She became a consultant for the California Coalition for Rural Housing.

The Sacramento nonprofit wanted her 252 curriculum on the internet to serve Native Americans throughout the state.

Her new students need those skills: After losing their ancestral lands, many Natives also lost ancient traditions of how to grow healthy edibles. Now, an emerging “food way” movement has Native Americans relearning and preserving those practices.

“As we’ve moved into COVID-19, a lot of (Native) communities have started growing their own food” in remote areas, some of which she plans to personally visit, including a Paiute community in Bishop, Inyo County, Simonsen said.

The Sacramento native spent much of her youth at farms owned by her relatives in California, Oregon and Idaho.

She committed to farming in 2016 by completing the seven-month California Beginning Farmer Training Program at the Center for Land-Based Learning in Woodland.

Simonsen, who has a bachelor’s degree in sociology from Sacramento State, does not own a farm but will, some day.

Some graduates of the 252 class in Oak Park are now doing community gardening. One hopes to buy a farm soon, according to Simonsen. Others are looking to start plant-related businesses.

Simonsen, who sells lavender balms, mud sticks and other natural products she creates herself, remains grateful to The California Endowment for its past support.