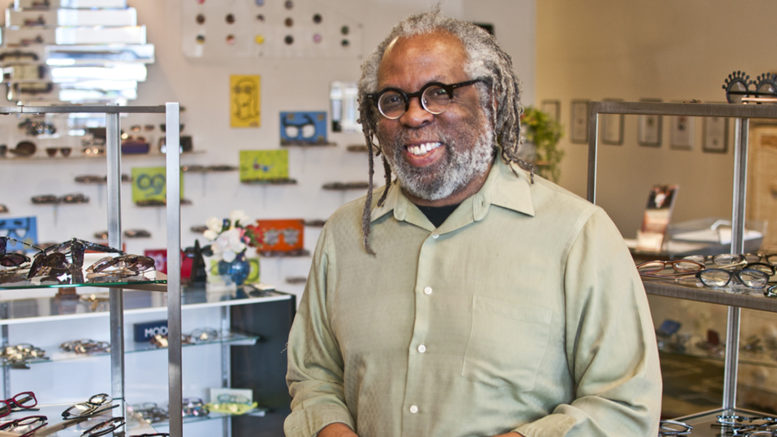 Dennis Peterson of That Guy Eyewear found the perfect spot for his business on Del Paso Boulevard.

Walk through the door of That Guy Eyewear and you might think you’re in the wrong place. That’s because the store’s striking decor and dramatic displays of eyewear frames (1,500 of them) make it look more like a designer’s studio or an art gallery than an optical shop.

Owner Dennis Peterson is an optician who likes to say, “Glasses are a fashion statement.” He stocks frames from several vogue designers, including Michel Atlan and Jonathan Cate, and sells one-off vintage frames, refurbished to like-new.

“I have frames you won’t find anywhere else,” he said. “I don’t carry the brands sold at the malls.”

Counterintuitive to that, however, is Peterson’s community involvement and personal ethos to give back.

“We want to reach out to the underserved, providing eye-care services for low-income people in transition, and children as well,” he said.

To that end, he contracted with an optometrist who will conduct routine eye exams on site, beginning sometime in January. Part of it will involve “bringing kids over for eye exams” through the Roberts Family Development Center. It focuses on helping underserved families via education, after-school programs and financial empowerment.

“Good Day Sacramento” broadcast a spot in October to promote the fundraiser that helped build-out the new eye-exam office.

In 2017, Peterson spoke at an after-school program at Grant High School and invited students to That Guy for an art project.

“I set them up with chips and salsa, gave them art supplies and trade magazines, and told them to paint eyeglasses and people wearing glasses,” he said. “I said, ‘Go for it.’”

A few months later, Peterson recruited artist Gerry Simpson of nearby GOS Art Gallery Studio to supervise a group of Grant High students while they painted an eyeglasses-centric mural on the side of the building.

“Kids have a blank slate,” Peterson said. “There’s nothing they can’t do, but it’s what they’re surrounded by that they absorb.”

Peterson has been in the vision-care industry since 1985, first in Phoenix and then in Tracy. He moved to Sacramento in 2014 and worked at several optical companies before going into business for himself. His first “office” was his garage.

“I decided I needed a place to go to every morning,” he said. “I was driving down Del Paso Boulevard and saw a ‘for lease’ sign. I was going to do wholesale only, but once I put in the retail front, it took on a life of its own. I think the location is a good choice. It’s a changing area and there’s a need here for what I do.”

Of course, not all of Peterson’s eyewear is designer-wear. Basic glasses with single-vision lenses sell for $69, and he has bargain-priced close-out frames. His turnaround for a new pair of glasses is usually one to three days.

But back to his community work. The question is, Why?

Said Peterson, “I guess because I’ve seen so many people who don’t have opportunities for the basic things, like being able to see.”