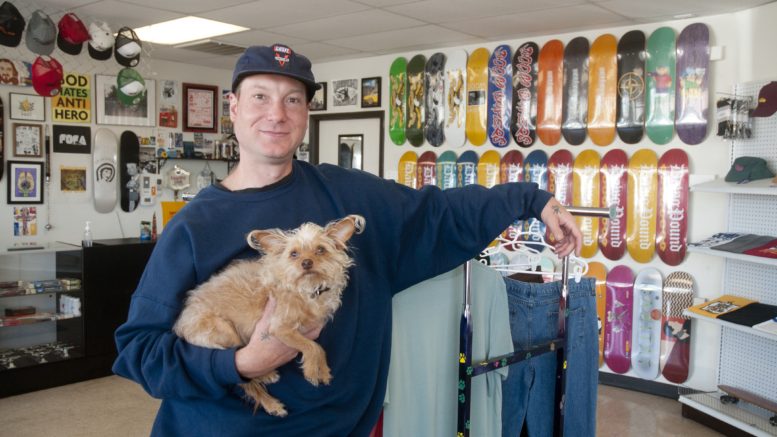 Given its name, it figures that Dawg Pound Skate Shop has a “guard dog” on site, so it was no surprise when Ozzi aggressively rushed the door when we walked in.

Don’t worry; Ozzi more closely resembles a 2-pound wind-up toy than a 90-pound Rottweiler. A few rubs behind his ears sent the little terrier mix happily hopping back to his rest area.

Underwood has skateboarding in his own DNA. He was first skating at age 5, when his mom bought him his first board at Toys R Us. It’s on display in the well-organized shop.

Sunlight from a bank of windows lights up a colorful array of skateboards and racks of skating apparel, much of it manufactured by his friends. “One buddy parlayed his graffiti career into tattooing and then into his own clothing line,” Underwood said.

By age 19, Underwood was a premier skater who had sponsorship from a local skate shop, but a major skating injury to his knee “curtailed my aspirations,” he said.

He went on to earn an associate’s degree in small business management from American River College. “I kind of floated for awhile, working most in retail, but I was still skating for fun,” he said.

Underwood and two friends opened an online business in 2015, packaging and selling skateboard “hardware” — the mounting hardware that attaches the “trucks” (the axle-wheels assemblies) to the “deck” (the board).

“We did well for awhile but our main money-maker was the skateboarding apparel, and it’s kind of the same here,” he said.

When their company went under, “something clicked and I decided to do what I’ve always wanted to do – go out on my own and open a shop,” he said. “I figured I should take the leap before I regretted not doing it.”

That led to Dawg Pound, opening in October 2019. “I went to City Hall and got my seller’s permit and business license in one day,” he said. “It shocked me how easy the process was.”

Given skateboarding’s ongoing surge, largely sparked by ESPN’s “X Games,” Underwood’s timing couldn’t have been better — even with a pandemic. The sport will get another boost when it makes its debut at the 2021 Summer Olympics in Tokyo.

In his shop, Underwood works with customers to choose the right deck for them, then assembles and attaches the multiple components to complete the skateboard, essentially custom-building each one.

He’s been skating for so long that “I’ve gotten to know almost everybody in the skateboard community, so we’re a destination shop,” Underwood said. “Plus, I use Instagram to bring in people who haven’t been here.”

Dawg Pound reflects some of the swagger and grit of Del Paso Boulevard, yet brings its own style to Old North Sacramento’s Uptown Arts District.

After looking around Midtown for a location, Underwood chose Del Paso Boulevard because “I like the charm of the neighborhood and the old architecture,” he said. “It’s got a good community feel, and the rent is reasonable. But it needs a concrete skate park. I’m thinking of starting a petition and attending some city council meetings to get the ball rolling.”

It was soon after he opened Dawg Pound that Underwood got a visit from the Del Paso Boulevard Partnership, the nonprofit that offers promotion and assistance to local merchants and property owners.

“They approached me immediately and explained their resources at my disposal and said, ‘If you need anything, we’re here for you.’ That was huge.

“Having a diverse group of young business entrepreneurs really says a lot about Del Paso Boulevard and the enthusiasm folks have for what’s going on in the area,” said DPBP executive director Daniel Savala. “The energy and the crowds they’re drawing really help build our momentum as we look past COVID-19.”