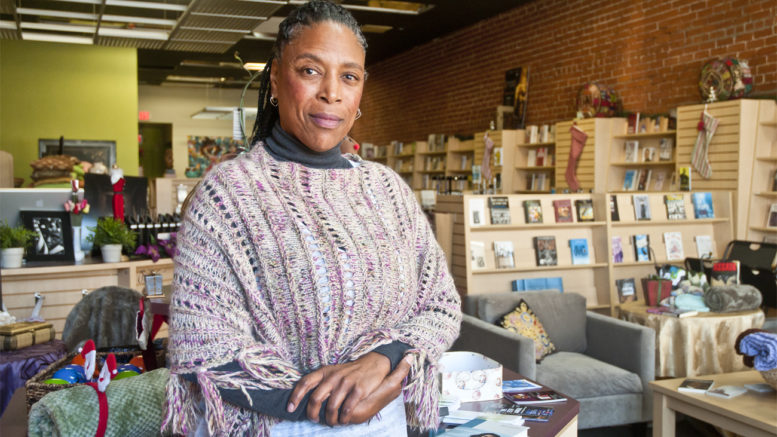 Sharon Wright has made Carol’s Books into a haven for Sacramento writers, musicians and filmmakers.

Carol’s Books so much more than a bookstore

Carol’s Books, which has had a presence on Del Paso Boulevard for 15 years, is more of an artists’ salon than an independent bookstore, a gathering place where writers, musicians and filmmakers congregate to share and learn.

Of course, there are shelves of books – fiction, nonfiction and children’s, mostly by African American authors, with audiobooks coming.

Far beyond that, owner Sharon Wright has brought together a large slice of Sacramento’s creative community in what she calls “a safe place, a haven.”

“So much amazing talent comes through these doors,” she said. “They come here to learn, to share life experiences, to pass on knowledge, to gain skills. I believe the role of the neighborhood bookstore is a delicate balance between philanthropy and business. Our role is being able to maintain both those things.”

It was the late trailblazer Carol McNeal who first opened Carol’s Books in South Sacramento in 1984, the first African American-centric bookstore in Sacramento and now the oldest. It was known as “a library of the black experience.” When McNeal announced her retirement, Wright stepped in to buy the store and relocate it to Del Paso Boulevard.

Why Del Paso? “North Sacramento had a need for a changing narrative, and I felt that bringing a literary aspect would start to develop that,” she explained. “Today this is an amazing community of people looking for entrepreneurial opportunities.”

Carol’s invariably fills up for its regularly scheduled events, which include comedy night, live music jams, book readings for adults and children, author appearances, and a round table where topics range from screenwriting and book reviews to politics and current events.

Wright has had a long relationship with the California Film Foundation, which regularly comes to Carol’s to sponsor a variety of workshops and host guest speakers. Most recently, writer-producer Mark S. Allen of ABC’s TV show “Morning Blend” appeared to talk about the newly released horror movie “Apparition,” which he helped write and produce.

Wright’s “troupe” of local directors, actors and writers took first place in the California Film Foundation’s 48 Hour Film Festival with their movie, “Perceptions.” They’ve even filmed 12 episodes of a sitcom set in a bookstore called Pages. “I think we’ll have that on YouTube,” Wright said.

“What we do here is help create opportunities and serve as a platform for others to showcase their talent,” she said. “It’s about collaboration, but it all revolves around literacy.”

For a schedule of Carol’s Books events, go to www.instagram.com/carolsbooksstore/