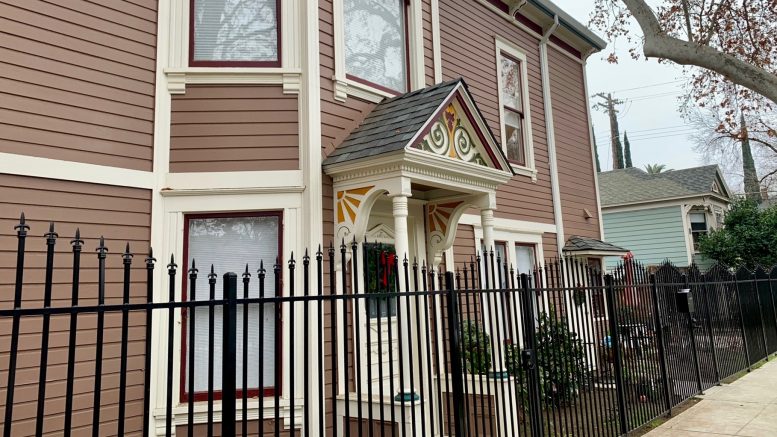 Statistically speaking, Dumitru Cucicea has something of a rare asset in Sacramento.

Cucicea, a developer who does work in the local region as well as Napa and Berkeley, built a duplex in 2020 around North Sacramento’s Del Paso Heights and Robla neighborhoods. All in all, it was a smooth experience, even if Cucicea built his duplex near Rio Linda and Marysville boulevards on a block that wasn’t previously loaded with this type of housing.

“The city was receptive to it,” Cucicea said. “They were helpful in some ways. The neighbors were also pretty receptive to a newer property being built on their street and in the community.”

Cucicea built what’s called missing middle housing: two, three, or four-unit properties that prior to World War II were abundant in Sacramento and other cities.

With residential stock pivoting to single-family development in the mid-20th century, missing middle housing comprises only a fraction of the city of Sacramento’s housing supply.

During a Sacramento Planning & Design Commission meeting on Dec. 1, Mitali Ganguly of Opticos Design said there are around 3,500 missing middle units in Sacramento, while the city has about 200,000 housing units total, according to Matt Hertel, a principal planner for Sacramento.

But this could be changing, with the city in the midst of a missing middle housing study as part of its 2040 general plan update and looking at ways to potentially boost this housing stock.

What brought ‘the middle’ to light again

The City of Sacramento received a $650,000 grant from the Sacramento Area Council of Governments to undertake this study, with city staff giving a status update on Dec. 1 to the planning commission.

Davis is a member of the consultant team assisting city staff with the study through outreach, media engagement and venue planning. Unseen Heroes was founded as an Oak Park-based marketing and events agency. Davis’s group also recently launched a 501(c)3 non-profit, CLTRE, a community development corporation. Davis has said that his CDC plans to focus more on real-estate investment to help prevent displacement in underserved areas such as Oak Park.

In a place like Sacramento that has faced soaring rents, a crippling housing shortage, and crisis levels of homelessness in recent years, building community has meant being open to looking at different approaches on creating housing.

“The Missing Middle Housing concept has the potential to empower local homeowners and builders to reinvest in our communities and provide much-needed housing,” a staff report for the implementation study status update noted. “It also provides economic opportunities for homeowners in the city to house intergenerational households and earn passive retirement income.”

There has been some success in other cities that have pursued related concepts in housing, with the 159-page draft report included with the Dec. 1 planning commission agenda noting that Portland “found that allowing smaller units citywide could reduce average housing costs by 56 percent over a 20-year period.”

That could be sorely needed in Sacramento where median rents topped $2,100 in 2021 and median home prices have been above $500,000 in recent years, according to the staff report.

The city has also lagged to meet mandated building levels from the state, known as the regional housing needs assessment, or RHNA. The draft study notes that while the city has averaged about 2,000 new housing units annually for the past decade, with the number soaring to 3,364 in 2021, that’s still more than 2,300 short of what’s needed annually to meet RHNA standards.

“It’s a key piece of addressing our housing crisis, not only in Sacramento, but in California,” Steinberg told us. “And, you know, the bottom line for me is that we need to make it much easier to build housing at all income levels, including the missing middle. There are too many obstacles.”

Ryan Lundquist, an appraiser who closely studies the local housing market, sees positives with this concept, as well. “With these types of units, it’s nice, especially when they can be sprinkled through the different neighborhoods that you don’t have an entire street of fourplexes or an entire street of duplexes,” Lundquist said.

As part of the first phase of its missing middle study, the city fielded an online survey to 388 people, 69 percent of whom felt that missing middle housing could increase housing opportunity.

Missing middle housing also ties in with what the city heard through two years of outreach after initiating its general plan update in 2018, according to Nguyen Nguyen, an associate planner for Sacramento.

“We heard a few key themes of the need for affordable housing [and the] need to address the climate crisis that we’re in,” Nguyen said. “One of the key strategies that came out of that outreach was a key strategy to permit a great range of housing types in the city’s single-unit neighborhoods.”

Hertel said “we’ve committed to … making our city more inclusive, to allow a variety of housing types throughout.”

Still, missing middle housing doesn’t like it quite has universal support yet in Sacramento.

Single-family zoning also still has its share of supporters, people who came out of the woodwork in recent years after the state passed a series of laws to make it easier to build accessory dwelling units, or ADUs.

“I would love for it to be local, municipality by municipality,” said Michael Nerby, a real estate agent who built his first ADU, in Sacramento, in 2021. “But like, when it comes down to it, they’re just beholden to these people in the neighborhoods who don’t want to change, like the way it is. They like the equity that they have in their single-family house.”

Where things go from here remains to be seen, with Greg Sandlund, the city’s planning director telling the commission during its Dec. 1 meeting that there could be another update in January. The city expects to undertake its second phase, doing a city-wide analysis, in early 2023.

“I think there’s absolutely political will,” Sacramento Planning Commission Vice Chair Maya Wallace noted. “I would say, the current council and even the previous council — because we’ve gotten a lot of turnover in the last couple of years — there’s been this push to do a lot of things to increase the potential … for building more housing and streamlining those processes.”

For leaders like Steinberg, it’s also about Sacramento being worthy of its designation from earlier this year as the first city in California to receive a prohousing designation from the state’s Housing and Community Development Department.

“I want us to continue to live up to that,” Steinberg said. “And that means producing more [housing] for all income types, including the missing middle.”