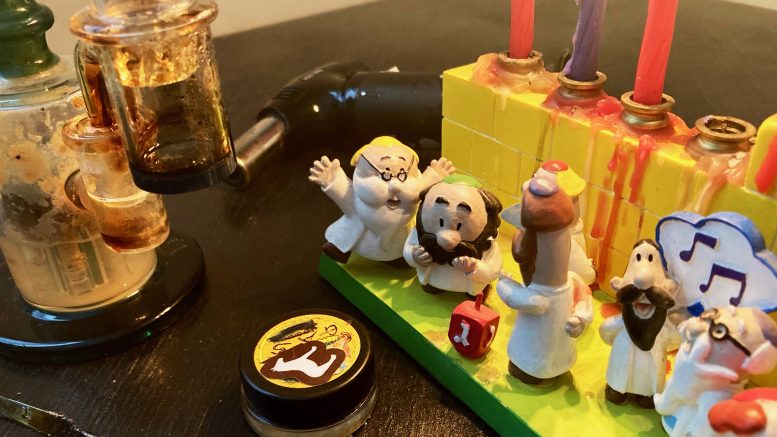 As the autumn leaves turn yellow and the Central Valley mornings usher in the coldness of winter, holidays in Sacramento bring back memories of family, festivities and, yes, cannabis. In one way or another, marijuana has worked its way into 50 years worth of holiday celebrations, and sometimes I didn’t even know it.

When I was in eighth grade ceramics class, a friend named Gary said he was making a “hookah” water pipe as a Christmas gift for his dad. “What a great idea,” I thought. My dad occasionally smoked pipes, so I made a hookah too. It had to be the ugliest thing I ever gave my pop, and it barely worked. But he used it a few times, just to show that he appreciated my hand-crafted generosity. But after that Christmas, the hookah sat in a cupboard for 25 years.

It turned out that Gary didn’t make a hookah pipe for his dad. He made one for himself. At the time, I didn’t know that Gary was one of a hand full of kids at our middle school in the late 1960s who smoked cannabis. Our ceramics teacher never figured that out, and in my naiveté, I didn’t either. It took years for me to realize I had actually made a bong for my dad.

In high school, I started smoking pot, and got booted out of the house one Thanksgiving for refusing to cut my hair. Hair length was a big issue for teenage boys back then. A friend named John heard about my situation and said his parents were inviting me to his house. “My mom says that pu pus will be served at 2pm,” he said.

John’s family came from Hawaii, and pu pus are seafood appetizers. Their whole Thanksgiving dinner was traditional Hawaiian cuisine, with the main course being Kau Kau, or roasted pig. What made it even better, John and I could sneak out to his backyard between courses and smoke joints.

Thinking back, I’m not sure whether John’s parents even cared that we were getting high out back. They were free-thinkers who created their own holiday traditions. And Hawaiian food sure is good when you’re stoned.

I found myself alone one Thanksgiving, when everyone else went out of town. Instead of going along, I stayed home and cooked a complete Thanksgiving dinner for one. It wound up making enough for six, so the leftovers were awesome. All day long, I smoked pot in the kitchen, in the living room, the bathroom, whenever I wanted.

Every time I lit up, my cat would sit and stare at me from eight feet away. Did Spot like my second-hand smoke? I have seen cats run at the first smell of smoke, but my cat seemed to like it. I could see her little nostrils working overtime whenever smoke drifted her direction. After several seconds she would walk off and fall asleep. Later that evening, the Dallas Cowboys were getting crushed by the Philadelphia Eagles on television. But Spot and I slept through most of it on the couch. What a great Thanksgiving that was!

Three times in the 90s, I went to Mexico during the holidays. But rather than visit tourist towns, my friend Pete and I crossed the border at San Luis and headed east. We were going camping at magical place called Pinacate Peaks, a cluster of volcanic craters in the Sonora Desert. Right after we pulled into the entrance, Pete stopped his truck and said, “Wait here for a moment.” He walked over to a group of rocks and pulled out a small bag. Back in the truck, he handed it to me. “I stashed my pot here last time, so now we’ll have something to smoke,” he said.

“You smuggled pot into Mexico?!” I asked.

“Yeah, they don’t check you when you’re coming in,” he answered.

My wife and son are vegetarians, so, to keep the aroma of meat from wafting through the house, I cooked our Thanksgiving turkey on an electric roaster out in the garage. Now the rest of the family had meat to eat, and I had a reason to watch football in the garage all morning. Electric roasters are brain-dead simple, so there isn’t much to do. Each time I lifted the lid, that wonderful turkey aroma floated across the garage, blending-in with the smell of cannabis.

There were two places at my house, out by the garbage can, and inside the garage, where I started hiding small pipes, pre-filled with bud and ready to light. Once the holiday guests arrived and things got busy, all I needed was an excuse to run outside to take a quick hit. Sometimes I could hear my neighbor on the other side of the fence, smoking a cigar and talking to his dog.

Over the decades, the number of relatives who smoke cannabis has surpassed the number of elders that don’t approve. But out of courtesy, we still go outside to smoke, which means I have to pre-position more pipes in more locations. To get a quick toke, someone only needs to say, “I’ll be right back, left something out in the car.”

For folks who smoked cannabis mostly during the decades when it was illegal, there is a certain thrill that comes from sneaking around outside and taking clandestine hits. But everyone can’t go at once. Suddenly, three cousins are sharing a joint out by the garbage can. “Hey guys, someone has to go back inside and watch football, or someone will want to turn the game off during dinner!”

For the last few years my friend Dan has invited me over for Chanukah on any of the eight nights that might line up with a Sacramento Kings game. Camped on the couch and staring at the TV, we alternate between dab hits and tequila shots. During halftime, Dan lights that evening’s candle on his hand-crafted menorah and sings a traditional Chanukah prayer song.

One year, he explained the Festival of Lights’ ranking, compared with other Jewish holidays. “Chanukah is not one of our bigger holidays, you know,” said Dan. “It’s just got more important because it happens around Christmas. So, thanks to Christmas,” he said, “our Chanukah presents have gotten better, at least on the last night, getting that bicycle you wanted, instead of socks.”

But nothing beats the memory of being high in one’s own studio or workshop, especially late at night, making gifts, listening to music and wrapping presents. Now, to put the vape pen away, and get those Christmas stockings filled before falling asleep.

TOPICS:Cannabis and Christmas in Sacramento

Be the first to comment on "Sacramento’s holiday highs: A half century of celebrating the season with family, friends and cannabis"