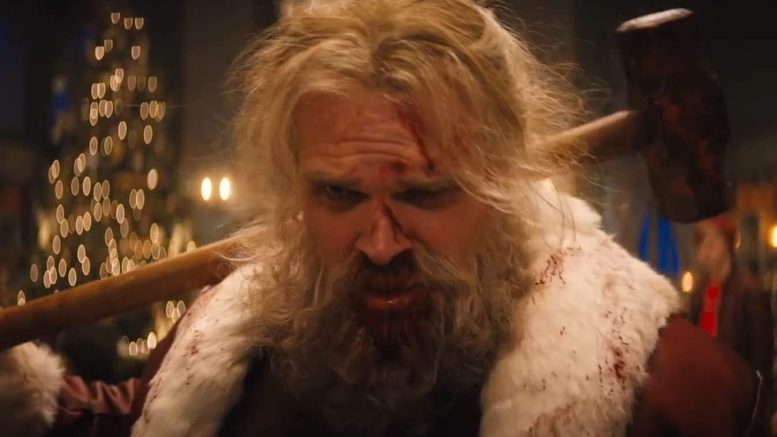 David Harbour in 'Violent Night,' which is in theaters now.

Santa gets all liquored up and kills him some bad guys in Violent Night, a gory comedy that starts off a little slow but delivers the naughty Christmas goods by the time the credits roll.

David Harbour gets one of his better gigs outside of Stranger Things; he somehow manages to portray a genuine and tender Santa while also delivering a supremely badass Santa.

His Santa is all but done with the gig, drinking until he pukes on Christmas Eve and begrudgingly going through the motions.

A wealthy family gathers to visit their matriarch (Beverly D’Angelo, getting a very different kind of Christmas-movie gig). Knowing that Momma’s house has a lot of money in it, a band of criminals, led by a meanie with the code name Scrooge (John Leguizamo), shows up and completely ruins the festivities. Santa, who just happens to be in the next room, half passed out and sloppy drunk in a massage chair, hears some gunfire—and gets a little spooked.

It turns out Santa is a former killing machine who used to take people out with a hammer before he turned to gift-giving. The bad guys awaken that vengeful side, and he starts crushing skulls in bloody yuletide fashion.

Director Tommy Wirkola takes his sweet time getting to the good stuff, but when Santa starts swinging the hammer, the fun really begins. Santa has an interesting backstory here—something I’d love to see them explore in the inevitable sequel or prequel.

While this is mostly Harbour’s show, Leguizamo is decent as the baddie, while D’Angelo is a welcome presence as the miserly mom. Edi Patterson, one of the more underrated comic actresses working today, is great as the selfish daughter, while Leah Brady is adorable as the little girl who believes in Santa—and who just watched Home Alone, so she’s bound to be rigging some booby traps in the attic where she’s hiding.

The holiday season has itself a nice new annual traditional viewing in Violent Night. Consider this one an antidote for those who find Home Alone too tame, and solace for those who like to see carnage more than caroling in their holiday cinematic offerings.

Be the first to comment on "Savage Santa: ‘Violent Night’ starts slow, but delivers gory laughs in the end"