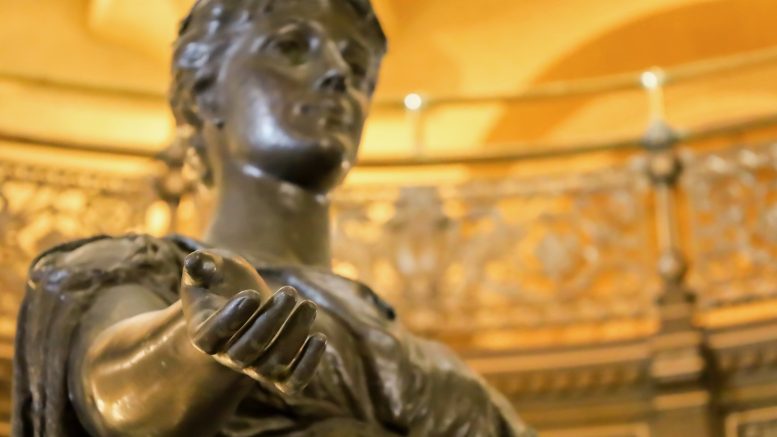 “She was my first-born. He took more than my child – he took the child who made me a mother.”

Those are the words of Marny Shaffer, whose 27-year-old daughter Savana was abducted and executed on October 22, 2020; and whose killer only faced his final justice in court two weeks ago.

When journalists cover traumatic events, particularly murder stories, one of the hardest human elements to capture is what’s experienced by those left behind.

Even if a reporter is spending time in the centrifuge of the heartache, the courthouse (which is exceedingly rare these days), there are reasons that an empathetic, three-dimensional approach might be hard to accomplish. To begin with, if something truly horrific has happened, it may take a while before the victim’s loved ones are able share or articulate the emotional havoc they’re wrestling with. After all, there is a mental survival process that has to happen, and it certainly doesn’t always match a newspaper’s deadlines. A recent example of that involves SN&R’s story “Deadly ‘match’: how Tinder brought three into a shared orbit of stalking, torture, white power and an execution linking Rocklin to Rancho Cordova.”

While working on that case, I’d approached one of the victims’ fathers as unobtrusively as I knew how, gently asking if he was in a state of mind that would allow for helping me describe who his son actually was. We always want victims in our long-form stories to have a human face rather than be defined by the grim details of their endings. While this father was extremely respectful and open-minded about that question, he didn’t ultimately take me up on the offer. It’s completely understandable. I’d essentially asked him to define what was lost while towing the unthinkable – asked him to think his way through a kind of unreality he was immersed in – and I’d done so just as he was beginning soak-in a slew of new, upsetting details that were revealed in court.

Would I have liked a more flesh-and-blood portrayal of the victim in that particular story? Of course. But in the end, it was an example of how the unbearable weight of violent crime itself can make something impossible.

Another challenge for family members has to do with the long, often torturous time-cycle of the California criminal justice system. Depending on the circumstances of a given case – or a specific defendant’s stability and behavior – prosecutors may discourage a victim’s loved ones from speaking to journalists until after the sentencing phase of a trial. That’s when the case is fully adjudicated and there can’t be any last-minute surprises for the attorneys and judge. All of this would be theoretically fine if the regional court calendars didn’t move at a glacial pace. After a killer is convicted, it can be weeks or months before their sentencing happens. At that point, a reporter has likely already published their work on the case and probably doesn’t have the availability or resources to return to it. Journalism is a time-sensitive, ever-moving endeavor: When cautious or well-meaning authorities urge a victim’s family to be patient about telling their own story, it usually amounts to persuading them to miss the opportunity altogether.

So, there’s a kind of institutional and circumstantial inertia that all too often sweeps a victim’s family right out of the narrative. While there’s nothing that SN&R can do about this, we do have the opportunity this week to let readers hear from family members of the victim at the center of our recent story “Missing in the Mountains: obsession, violence and tragedy in a quiet place.”

On October 25, 2022 – almost two years to the day that Jerry Lee Adams cravenly tricked, entrapped and murdered Savana Burger – the 46-year-old killer was hauled into Amador County Superior Court to face his sentencing. This wasn’t just the moment when it became official that Adams would spend 25-years-to-life behind bars, it was also his time for another kind of reckoning – having to face Savana’s family, eye-to-eye. Judge Steven Hermanson listened to 16 different victims’ impact statements about the young mother of three children who’d been taken from the world.

“We waited three long agonizing months before finding out Savana was no longer with us,” her sister-in-law and close friend Amanda Lavatia told Adams. “The thoughts that went through my mind, wondering if she was still here or not. Wondering if she was suffering … And when the day finally came, when Savana was finally found, my heart shattered … Her kids will never again know, or feel, the love from their mom. Because of you.”

Savana’s aunt, Leya Shaffer, made this observation: “I’m supposed to write a letter and explain how Savana’s murder has impacted my life. In all honesty, I don’t think that is possible. Everything I write doesn’t seem enough … Seeing the grief and devastation in my niece’s eyes … Savana loved everyone she ever met … It was impossible not to love her, she was a beautiful and kind person.”

And of course, there are the thoughts of Savana’s mother, Marny Shaffer, who has struggled to put into words what the last two years have done to her existence.

“It ruined my life,” she said plainly. “She was the one person I could count on to take care of everyone if I was gone. I’m in pain every day.”

Our political debates around public safety and crime and punishment will continue to rage in California; but when we’re trying to navigate those dark, murky and chaotic waters of social reality, we shouldn’t fall back on attempting to sterilize their churn. This is not a summery on a white paper or data sets in a spreadsheet. This is real-life. These are hearts and souls with a scalpel taken to them. We should all try to remember the human toll when weighing justice policy; and we should all try to imagine those voices swept out of the narrative – the voices of those left behind.

TOPICS:The voice of victims in California in 2022

1 Comment on "Editorial: When it comes to violent crime, do we even hear victims anymore?"