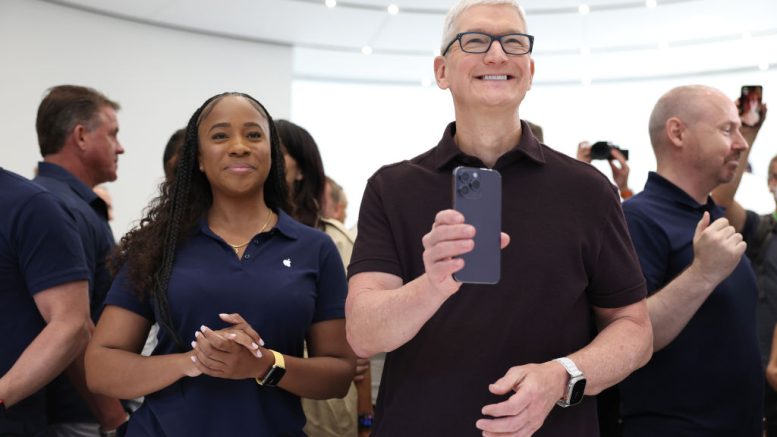 A new report has the receipts on our overcompensated corporate titans.

Apple Inc. had a fine 2021. The Cupertino-based company’s stock price closed the year up almost 39%, roughly 10% higher than the S&P 500 overall, and its revenue surged by 33% in the fiscal year that ended in September 2021.

Tim Cook, Apple’s chief executive officer? He did even better.

Earlier this year, Apple’s shareholders approved a total compensation package for fiscal year ’21 that came to nearly $100 million for Cook. They did so despite a shareholder advisory firm recommending against the deal because it was so excessive, and also in the knowledge that it didn’t ultimately matter: Apple’s directors had the right to do what they wanted regardless of the vote’s outcome.

Apple is certainly a thriving company, churning significant growth and rising shareholder value. Even so, it’s fair to ask whether Tim Cook was worth 1,447 times the median pay of Apple employees for that fiscal year, which is what he was ultimately awarded.

It’s also fair to ask why this practice is so common, including companies that boast nothing close to Apple’s performance. CEO pay at America’s biggest companies is spiraling ever higher — and at a growth rate that dwarfs anything the stock market or even the country’s highest earners are enjoying, much less the everyday workers who make those companies go.

This phenomenon is explored in a new report by the Economic Policy Institute (EPI), whose findings are staggering. From 1978 to 2021, CEOs at the top 350 firms in the U.S. saw their compensation packages grow by 1,460%. For purposes of comparison, the stock market grew by 1,063% during that time, and the top 1% of earners saw their compensation rise 385% between 1978 and 2020 (the latest data available).

Even under the most generous assessment of the value a CEO brings to a company (or to its stock price), the gulf between top executives and the rank and file is extreme. More to the point, CEO pay isn’t really controlled or regulated by anything other than board votes. For an employee who is constantly being ground down to the lowest wage that can possibly be paid, that has to rankle.

“The reason for this mostly lies in the totally dysfunctional wage market in which CEOs reside,” says Josh Bivens, director of research at the EPI and a co-author of the study. “We’re talking about a big enough chunk of money that it actually matters, too.”

The average compensation package for a CEO at one of the U.S.’s top 350 companies last year was nearly $28 million, per EPI’s research. Significantly, very little of that total, only about 10%, was taken in salary, Bivens says, while roughly 80% came in the form of stock awards. (The next time you read about a CEO forgoing his salary amid a corporate crisis, it’s something to keep in mind.)

Partly because of that heavy stock mix, the institute looks at CEO compensation in two ways: the “granted” measure, which is the value of the stock rewards and options at the time they’re given, and the “realized” measure, which is what they’re worth when the stock awards are vested and the options cashed in.

By both methods of computation, top CEOs are killing it. Using the realized measure, they actually averaged an 11.1% increase in pay from 2020 to 2021, when the pandemic brought entire industries to a near halt and millions of Americans were thrown out of work. Reason? The stock market went up, and along with it the value of vested stock awards.

But it’s in the fundamentals that the CEO pay system looks truly broken. While few people would argue that top executives of growing and profitable companies shouldn’t be well compensated, the question of how much is enough — and how much is way too much — is almost never asked.

At most public companies, CEO pay is theoretically set by the shareholders themselves. “But the shareholders are usually represented by boards of directors, and in many, many cases, the members of those boards are hand-picked by the CEO,” Bivens says.

As a result, only about 3% of CEO compensation packages ever get turned down, Bivens says. Tim Cook’s deal was recommended against by the Maryland-based Institutional Shareholder Services, which noted that half of it wasn’t tied to a performance-based metric such as Apple’s stock price, and that the stock awards would continue to vest even if the 61-year-old Cook were to retire. It went forward anyway.

California’s top corporate executives did quite well in 2021. Patricia Poppe, CEO of PG&E, harvested more than $50 million at a time when the utility company was under scrutiny for a decade’s worth of disasters and wildfires its equipment may have caused. Cisco Systems’ Charles Robbins was awarded a $25 million compensation package, Disney’s Robert Chapek a $31 million deal, Chevron’s Michael Worth $22 million, and so on.

One talking point in all these cases is that of “rents,” a term that for this discussion has nothing to do with paying for a place to live. In economics, rents mean payments made to someone over and above what they’d actually accept in order to accept and perform a job.

It isn’t an idle thought. The notion of top CEO pay is tied to the idea that corporations have to offer such bloated deals because of competition with other companies for those executive minds. But as EPI’s report notes, “They are not getting higher pay because they are becoming more productive or more skilled than other workers, or because of a shortage of excellent CEO candidates.” They’re getting paid more simply because they are.

This produces potentially toxic effects down the line. First, top CEO pay generally influences the compensation of the next four highest-ranking officers in a company. Says Bivens, “It has become a nontrivial chunk. You’re now looking at 5% to 6% of all the profits of that company” tied up in those top pay packages. (At PG&E, the chief customer officer received $7.5 million in 2021, the chief operating officer $6.5 million and the chief risk officer $1.6 million, per the Mercury News.)

The skyrocketing CEO compensation also can influence noncorporate settings and their pay structures. A former top corporate executive, for example, might not be willing to become a university or institution president unless he or she receives a massive deal to do so. And the rising tide of money and stock awards to high-ranking executives means the gains of the company are less evenly distributed among its workers than ever.

What might turn that tide? Bivens says that, historically, companies whose workers are unionized tend to rein in the compensation of their executives, in part because those top pay figures often become publicly debated and criticized during labor negotiations. It’s also possible to tweak corporate governance in a way that encourages more direct voting by shareholders on things like CEO packages, diluting the sway of executive-friendly boards.

More broadly, the EPI recommends imposing higher marginal tax rates on the top earners, to “limit rent-seeking behavior and reduce the incentive for executives to push for such high pay.” Another option, the institute’s authors write, is to set corporate tax rates higher for firms that have higher ratios of CEO-to-worker compensation.

“It’s one thing to have an incentive to attract great CEO candidates,” Bivens says. What we’re seeing now is runaway compensation of another order entirely — the kind that ought to make shareholders wonder about the value they’re really receiving.

Be the first to comment on "For America’s top-ranked CEOs, too much is never enough"