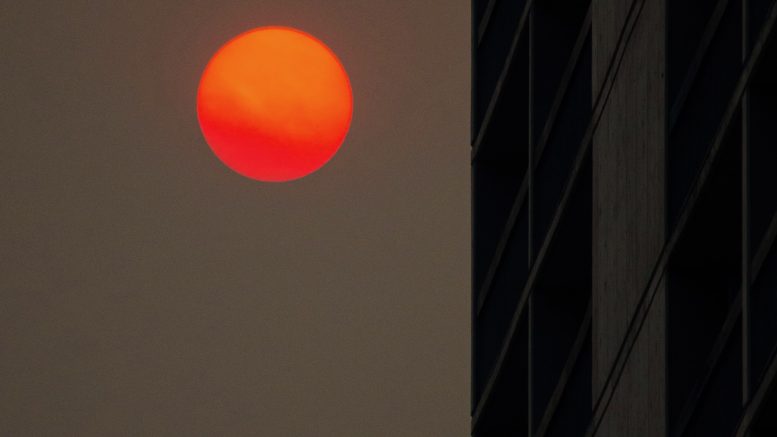 By Hayley Repetti and Will Smith-Moore

Sacramento State student Victor Lozano lives between Lodi’s two major freeways, I-5 and I-99. “It’s a continuous flow of traffic,” he pointed out, meaning the air quality is typically unhealthy because of gas powered vehicles.

Like Lozano, many residents in the Sacramento area are affected by bad air quality from pollution, not to mention season after season of wildfire smoke that lingers for weeks or months at a time. Proposition 30 would raise taxes on the wealthy and use the proceeds to prevent forest infernos, make electric vehicles more affordable and fund new EV charging stations, according to the Legislative Analysts Office.

Under the proposition, taxpayers who make more than $2 million per year will pay an additional 1.75% of the share of their income above $2 million.

Eighty percent of the tax dollars collected will go towards zero-emission vehicle programs (ZEVs) that help people purchase EVs and toward building new charging stations. The remaining 20% will go towards wildfire prevention.

In September of 2020, California Governor Gavin Newsom issued Executive Order N-79-20, an order that mandates that all new passenger vehicles sold in California be zero-emissions by 2035.

Proposition 30 would potentially help California get closer to that goal. However, Newsom has spoken out against Prop 30. This is the only proposition that he has openly opposed this cycle. He even appeared in a “No on 30” campaign ad.

“Put simply, Prop 30 is a Trojan horse,” Newsom says in the ad, noting that the ride sharing company Lyft has provided millions to support the proposition. “It was devised by a single corporation to funnel state income taxes to benefit their company.”

Newsom’s opposition is important, as it may influence many of his supporters.

Linda Lee of Sacramento found Newsom’s opposition puzzling but is willing to give the governor the benefit of the doubt.

“Newsom has always been a people-first person to me,” Lee said. “He has called out other states, took serious measures to combat COVID-19, and helped people out during the pandemic.”

Lee also agreed with Newsom’s statement that the proposition is a Trojan horse.

“Something’s gotta give,” she add. “There has to be more to this tax or some kind of consequences if this prop passes.”

Alec Tong, a Sacramento State student and intern in Mayor Darrell Steinberg’s Office, said that he will vote no on Prop. 30. He believes California is already pursuing clean energy goals.

“At the State Legislature, we’ve been pushing the agenda of meeting climate goals and one of the biggest things is meeting the 40% decrease [from 1990’s emission levels] by 2030,” Tong observed.

California has several long-term climate goals, including the goal to be 80% below 1990’s emission levels by 2050.

Jon Coupal, president of the Howard Jarvis Taxpayers Association, said Californians “are shouldering a lot of responsibility for climate change policies, not only in the United States, but in the world.” However, he added, “Californians are paying the price for a policy that really needs a global response.”

Helping Lyft and other rideshare companies

According to votenoprop30.com , Prop 30 would help rideshare companies, such as Lyft, purchase EVs, since their fleet must soon go all-electric, the Clean Miles Standard.

Tong said, “Regardless of if the state helps” Lyft or other rideshare services purchase EVs, “they will have to phase out their gas vehicles sooner or later,” because of the executive order, “They will have to do it in order to conduct their business here in California.”

To align with Newsom’s executive order, the California Air Resources Board (CARB) implemented the Clean Miles Standard in May 2021, which ensures that rideshare companies like Lyft “achieve a level of zero greenhouse gas emissions and to ensure 90 percent of their vehicle miles are fully electric,” according to CARB.

According to Tong, California has already lost a few big companies due to high taxes, such as Elon Musk moving Tesla’s headquarters to Texas because of lower taxes.

On the other hand, Rancho Cordova resident Mitchell Barnett feels there shouldn’t be any concerns about driving the rich out of California.

“They won’t leave just because of that,” Barnett countered.

Barnett had more concerns about the affordability of EVs for low-income residents and the ability of the power grid to withstand the looming increased strain.

“How many people can afford a car that’s 60k,” he asked. “And if they could, where is the power going to come from?”

Nick Josefowitz, the Chief Policy Officer at the nonprofit San Francisco Bay Area Planning and Urban Research Association (SPUR), further disputed the claim that Prop. 30 would drive wealthy residents out of the state.

“California has increased income taxes over three times over the last decade,” he said. “The evidence clearly shows that wealthy people did not leave the state as a result of that”

Josefowitz added that California has gained more wealthy people in that time span.

“You have twice as many people who earn over $2 million dollars now in California as you did a decade ago,” he said.

How you can Vote

The election will take place on Nov. 8. The deadline for registering to vote will be on Oct. 24. For more information on Prop 30 visit here and for more voter and election information, visit here.

Be the first to comment on "Year after year of smoke-choked skies put Sacramento at the center of the Prop. 30 debate"