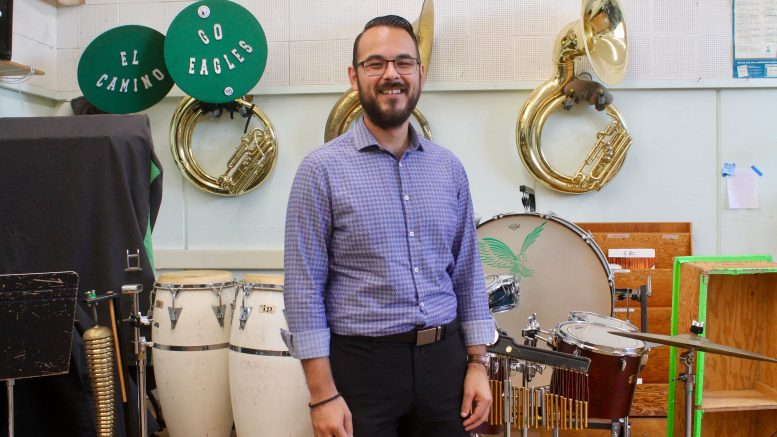 By Elizabeth Meza and Angela Rodriguez

Gabriel Read, director of bands at El Camino Fundamental High school, fell in love with instrumental music when he attended that campus as a teenager, ultimately deciding to pursue his passion in college. He’s now been a music instructor for four years.

Read had attended Sacramento State University, double-majoring in instrumental music education and saxophone performance. Music shaped the way he worked through problems. It has also been integral to how he interacts with his students today.

Like most musicians, Read got involved with music only through the time he spent in the school band during his early academic life.

The upcoming vote on Proposition 28 will affect whether other students get that same opportunity for creative learning and expression. Supporters say the ballot initiative provides additional funds for arts and music education in public schools, requiring California to allocate the equivalent of 1% of money budgeted to public schools in the prior year. It works out to an estimated $1 billion annually.

“I’ve seen few, if any, arguments against it,” Read said. “It’s allocating money that is already on the state budget, so the implications on us as individuals is much lower than some other ballot measures.”

Around 6 million children attend public schools throughout California, and about 60% of them are from low-income families, according to the Legislative Analyst’s Office, or LAO. Most public schools receive their funds based on their student enrollment. This formula also gives schools with many low-income students more funding.

“Sixty to 80 percent of students in some of the districts are eligible for free and reduced lunch: Their families are barely scraping by to get food on the table,” said Allison Cagley, who is the founding executive director of Friends of Sacramento Arts. “They don’t have the time, the focus, or the financial resources to provide arts as an after-school program.”

Proposition 28 would distribute 70% of additional funds to statewide districts based on student enrollment and the other 30% would go to schools that have more low-income students, according to the LAO.

“Prop 28 seems like a good idea,” echoed Sacramento tattoo artist Nicole Skalski. “Even if students aren’t going to be majoring in art or pursuing an art career, they deserve to be able to take art classes for fun. Learning to express yourself is a skill that translates into all aspects of your life and art nurtures that.”

Skalski added that she attended schools that had underfunded art programs while growing up. The art supplies that she was provided were old and trashed, but that did not stop her from pursuing her current career in art.

Austin Beutner, former superintendent of the Los Angeles Unified School District, has a similar view about the overall power of arts in the classroom.

“Arts and music are an essential part of a good education,” Beutner observed. “Every student should have the chance to participate and have that sense of belonging, sense of wellness, and the chance to use their voice, agency, and expression.”

There are detractors, though. According to Lance Christensen, a candidate for state Superintendent of Public Instruction, Proposition 28 is unnecessary as schools already have enough funding.

“They [school districts] have very little discretion over their funding,” Christensen argued. “Most of them are constrained by expenses in the operation of buildings, overhead administrative costs–all the things it takes to run a school.”

“There’s no argument in my mind or my experience that the schools don’t have enough money” he went on. “The question is where are they allocating those dollars?”

“In terms of work-force development, a lot of the skills that employers are looking for are creativity, problem-solving and teamwork. And that all comes out of art programs,” said Cagley.

Leticia Garcia, first vice president of the Board of Education for the Sacramento City Unified School District, noted that public schools often depend on fundraising to bring in additional resources for things like arts and music.

“Not every single school has a PTO (Parent Teacher Organization); and even if they do have a PTO, not every school can raise a lot of money,” Garcia explained. “I have PTOs that can raise $100,000 while others struggle to raise $10,000 throughout the year. There are these huge disparities. A part of recognizing that is trying to figure out how we can bring equity, where all kids have access to music and arts. Prop 28 is one way to do that.”

“Our PTO just signed a contract with an organization called CLARA that is serving the fifth and sixth graders,” Martin said. “They [PTO] also employ an art teacher that is here five days a week. Because our PTO has the funds and resources to provide arts and music for our kids, we’re able to have that for them.”

Be the first to comment on "Sacramento educators and artists see hopeful horizons for kids with Prop. 28"