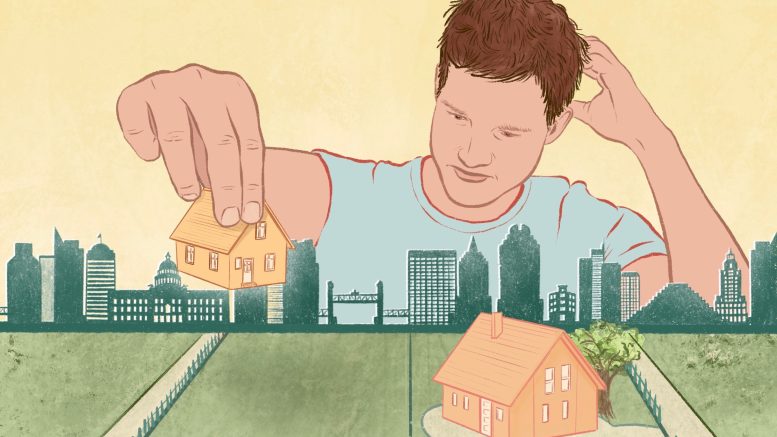 California’s housing crisis wasn’t built in a day, so to speak. The shortage at hand happened over time, caused by a perfect storm of population growth, restrictive building policies and the pursuit of the “American Dream.”

Historically, that dream had a specific look: a single-family home in a richer, whiter single-family zone. About two-thirds of all California residences are zoned this way and, on average, less than 25 percent of state land is zoned for multifamily housing development, according to a 2018 residential land use survey from UC Berkeley’s Terner Center for Housing Innovation.

But this century-old approach has aged poorly, according to housing advocates. They believe the single-family model clashes with the needs of modern lifestyles and forces developers to expand farther and farther out. This not only limits access to urban centers, but also disregards current trends of communal living, walkable cities and multigenerational households.

Senate Bill 9 — the California Housing Opportunity and More Efficiency (HOME) Act — was written to eliminate single-family zoning in California, allowing homeowners to split their lots into two parcels and develop a duplex on each one for a total of four units. This would give homeowners a chance to build a home for an elderly parent or create a new rental property, essentially giving more families an opportunity “to pursue their version of the California Dream,” said Senate President Pro Tem Toni Atkins (D-San Diego), who wrote the bill.

But not everyone agreed. Opponents feared the legislation would encroach on their way of life and destroy the unique character of their communities. They campaigned. They held meetings. They wrote more letters. They wanted the bill killed.

“SB 9 does not guarantee the construction of affordable housing nor will it spur additional housing development in a manner that supports local flexibility, decision-making, and community input,” read a September 2021 letter sent to Gov. Gavin Newsom, signed by more than 240 California cities and the League of California Cities. “Policymakers must avoid pushing new, unproven policies that would undermine local planning, change the rules midstream, or conflict with the myriad of new housing laws recently passed that cities are now implementing.”

But Newsom — in the spirit of what he called “political courage” — signed SB 9 into law as part of a suite of bills to support denser housing closer to major employment hubs and, ultimately, “build housing for all.”

The law went into effect Jan. 1, 2022, despite this flurry of controversy. As of October 2022, the City of Sacramento has received applications from 14 properties, according to the city’s planning division. Of the 11 that have been approved so far, five include lot splits and six are for duplexes.

Matt Hertel, principal planner for the city, sees SB 9 as an important tool for being able to build additional neighborhood-scale housing options, like duplexes. “SB 9 also provides opportunities for additional homeownership by allowing property owners to sell half of their lot to a new homeowner,” Hertel says. “It is providing more housing options, which is needed throughout the State.”

Behind the white picket fence

“It’s Time to End Single-Family Zoning,” a 2020 article published in the Journal of the American Planning Association, breaks down the racial roots of the current housing crisis and the privileging of single-family zoning, typically called R1 (one residential unit on a lot).

“R1’s origins are unpleasant: Stained by explicitly classist and implicitly racist motivations, R1 today continues to promote exclusion,” the article says. “It makes it harder for people to access high-opportunity places, and in expensive regions it contributes to shortages of housing, thereby benefiting homeowners at the expense of renters and forcing many housing consumers to spend more on housing.”

After the Supreme Court struck down racial zoning in 1917’s Buchanan v. Warley decision, single-family zoning spread fast and wide. Bulk land purchases made it harder for people with lower incomes (mostly non-white people) to buy into these spaces. As a result, according to the JAPA article, racial segregation could be maintained without explicit racial language. The article authors — Michael Manville, Paavo Monkkonen and Michael Lens — illustrate this planning predicament with a health care analogy.

Suppose you need a small amount of expensive medicine on a regular basis. But one day the pharmacist won’t let you buy your small dose. The pharmacy is fully stocked. You can see the medicine over the counter. But the pharmacist tells you the government has implemented a new rationing system, so you can only buy medicine in bulk now. What should you do? Should you buy more than you need for more than you can afford? At least then you could sell your extra doses to those who might need them, right? Wrong, says the pharmacist and explains that dividing your medicine is absolutely not allowed under this new rationing system.

“Fortunately, the United States does not allocate medicine in this bizarre manner,” the authors wrote. “But it does ration urban land this way. And although land is not medicine, access to land, like access to medicine, has powerful implications for well-being.”

In this case against R1, the authors cite reports about the importance of where people live. From job opportunities and quality of schools for their children to their exposure to pollution and violence, a person’s residential location strongly correlates to their quality of life. Detached single-family living and the inefficient allocation of urban land perpetuates a legacy of prejudice against “non-whites, nontraditional families, the poor, immigrants, and urbanity,” they wrote, creating unequal opportunities and unequal outcomes.

Of course, the housing shortage isn’t just a California problem. Housing underproduction has plagued America as a whole with a national deficit of about 3.8 million units, more than double what the figure was in 2012, according to a 2022 report from Up for Growth, a cross-sector member network committed to housing advocacy. But California is, by far, the worst offender with a housing deficit of 978,000 units, which is more than three times the number for Texas, the second worst state for housing underproduction.

The greater Los Angeles area has the highest shortage of any metro area in the country, but Up for Growth ranks Sacramento in the top 25. Sacramento County renters need to earn $31.25 per hour (2.1 times the state minimum wage) to afford the average monthly asking rent of $1,625, according to a 2022 affordable housing report by the California Housing Partnership. The housing affordability crisis has tracked with the surge in homelessness in Sacramento County. The 2022 Point-in-Time (PIT) Count — which shows the number of people experiencing homelessness on a given night — found that Sacramento’s unhoused population had spiked 67 percent from 2019 to 2022.

Will SB 9 deliver California — the fifth-largest economy in the world — from its housing woes? Not so fast. According to the Terner Center, the law opens the door for about 700,000 additional housing units, but not every homeowner will want to deal with the financing or construction in their backyard. Even then, local governments have discretion when it comes to adoption, creating additional rules to greatly disincentivize homeowners who want to pursue the law, says Muhammad Alameldin, policy associate for the Terner Center.

From height restrictions to courtyard requirements, Alameldin says, about 500 jurisdictions each have their own say when it comes to eligibility, which makes SB 9 a good first step that doesn’t go far enough. But the heart of the law is in the right place, he says, adding that the only way for California to solve its housing crisis is to utilize the same bit of land that would have been zoned for a single-family house to build smaller units for multiple tenants. The focus on infill rather than suburban sprawl supports walkability and bus routes over commuting, which reduces emissions, keeps families closer and increases property taxes.

“We empower homeowners to build on the land they own,” he says. “It will help close the racial wealth gap and help us reach our climate goals. But we need to build upon this law. The law doesn’t go far enough.”

SB 9 is only one piece of the housing jigsaw. Matthew Lewis, director of communications for California YIMBY (Yes In My Backyard), acknowledges that “every new home helps shrink the size of the housing shortage.” But he also highlights the need for more subsidies for people with low incomes, zoning reforms and laws that protect tenants. Other issues need to be addressed in tandem, he adds, such as an end to parking mandates. “It doesn’t seem like it’s related [to affordable housing], but parking mandates around the state have used up an amount of land that will blow your mind,” Lewis says.

In September, Gov. Newsom signed four other housing bills into law — including Assembly Bill 2097, which ends parking mandates statewide near transit — punctuating a legislative session full of pivotal housing bills in California. Specifically, Assembly Bill 2011, which has been heralded as sweeping housing and land use reform, facilitates infill housing on commercial lands. This could unlock the creation of 2.4 million affordable homes throughout the state, according to analysis by UrbanFootprint, an intelligence platform to help the public and public officials determine the best scenarios and outcomes.

Be the first to comment on "Can SB 9 really help build housing for all in Sacramento?"