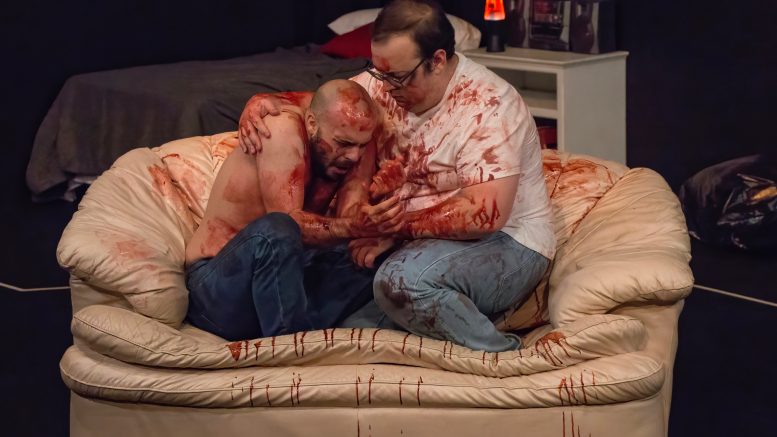 Ben and Jack covered in blood during a staging of Big Idea Theatre's "Wolves." Courtesy photograph

Big Idea Theatre Company kicks off the spooky theater season with “Wolves,” a mind-bending deconstruction of Little Red Riding Hood written by Steve Yockey. The playwright is the creator of HBO Max’s “The Flight Attendant” and forthcoming dark comedy television series “Cindy Snow,” produced by Warner Brothers. In “Wolves,” Ben and Jack share a “very small apartment in a very large city,” which becomes a scene of escalating tension and paranoia as primal fear and carnal pleasure become enmeshed.

The Narrator (Kathleen Poe, making her Big Idea debut) glides around the stage and warns the audience that things will get messy and to not go looking for a moral. She occasionally whispers things into the ears of other cast members that may be influencing the sequence of events. A sparkling blood-red brooch on her blazer twinkles against a set of all black, white and grayscale. With a cool demeanor and flippancy toward the unfolding violence, she gives the impression that she may be a visiting demon – or perhaps the devil herself.

Kevin Adamski plays an unravelling Ben, a recent transplant from a rural town, who just wants to order food delivery and stay in. Jacob Garcia’s Jack wants a night out, and the two exes argue. Ben can’t seem to differentiate between the dangers of the city and the forest – he imagines wolves snarling in bars and dark alleys waiting to pounce. All hell breaks loose with the arrival of an innocent (or is he?) guest, played by Eric Craig. From the outset, Jack is the more-brave of the two, but the tables keep turning and turning until everyone in the apartment is transformed into some form of their opposite.

This production is for mature audiences.

Showtimes run through October 29, Thursdays, Fridays and Saturdays at 8 p.m. Tickets are $18 General Admission, and $16 for Seniors, Students and SARTA Members. Thrifty Thursday shows are $12, and one Sunday matinee is offered on October 23 at 2:00pm ($12). Buy your tickets online at bigideatheatre.org

Big Idea Theatre is located at 1616 Del Paso Blvd in Sacramento. You can contact the box office at (916) 960-3036 or Boxoffice@bigideatheatre.org

Be the first to comment on "Bad moon rising: Big Idea Theatre’s ‘Wolves’ brings a darkly brilliant spirit to the season of spirits   "