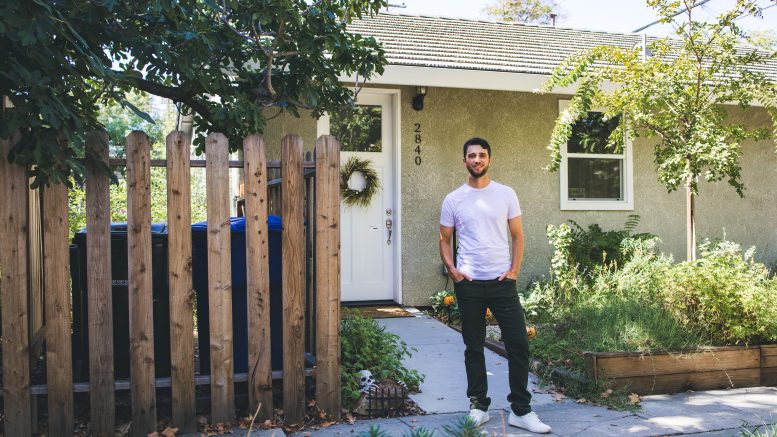 Dov Kadin spent $140,000 to build a 820-square-foot ADU in the backyard of his house in North Oak Park, which he rents to a tenant. (Photo by Wes Davis)

They used to be called “granny flats.” Or sometimes “in-law units,” “backyard cottages” or maybe “casitas.”

These are mini-homes that sit on the yard or driveway of a larger residence. They’re now officially called accessory dwelling units, or ADUs, and they’re popping up throughout California, seen by some as a way to address the state’s housing crisis.

“ADUs are booming. They’ve been skyrocketing since 2017,” says Annie Fryman, director of cities at Abodu, one of the ADU-focused construction companies sprouting up to meet demand. Fewer than 1,300 ADUs were permitted in California in 2016, according to BuildinganADU.com, and by 2019 that jumped to more than 14,000 — a tenfold increase.

This was by design. In 2017, to encourage the construction of more ADUs, the state of California made “sweeping changes” to loosen the permitting requirements, says Greta Soos, associate planner at the City of Sacramento. Then Sacramento did the same. “We took the state’s new laws and ran with that, and wanted to make it easier to build,” Soos says.

ADUs have become something of a superpower in the housing market: They don’t require the purchase of new land, nor do they require the gutting of old properties. There are no agonizing tradeoffs. This allows for an increase of what Soos calls “gentle density” to the region. “Seventy percent of Sacramento residential neighborhoods are zoned for single family-only dwellings, and the majority of those areas have already been built out,” Soos says. This puts a hard cap on the potential supply, but “ADUs present an opportunity to develop more housing units in the existing built-out areas of our city.”

Dov Kadin is an analyst at Sacramento Area Council of Governments, focusing on land use planning. He loved the idea of ADUs so much that he built one on his yard in North Oak Park, a “very serviceable” 820-square foot, 2-bedroom, 1-bathroom unit complete with a laundry room. The ADU was completed in 2019 and he now rents it to tenants.

“I could charge relatively low rent and still cover the construction costs,” says Kadin, “And that’s just not the case for a lot of new housing.” Kadin paid a total of $140,000 (through a renovation refinance), which is in line with ADU norms; a 2021 report from the UC Berkeley Center for Community Innovation found the median statewide construction cost of an ADU to be $150,000. Costs have risen since then, but they are still cheaper than new homes (median price of $864,000 for the state of California in 2022, according to the California Association of Realtors).

Some build ADUs for the rental income. Some for a home office or gym. “Most of them are looking to have family move in,” says Fryman, such as grandparents or college kids. She says that especially during the pandemic, there was a big push for families to reconsider having an elderly relative in a nursing home, “when we can move grandma into the backyard.”

There are two big asterisks.

The first is that while ADUs have flourished in California at large, as Kadin puts it, they’re still “niche” in Sacramento. In 2018, Sacramento awarded permits for just 30 new ADUs, according to Soos. That jumped to 57 in 2019, 76 in 2020 and 170 in 2021. It’s a big percentage increase but the baseline is modest. “We expect to continue to see an increase every year,” says Soos, adding that the city has a goal of 600 units between 2021 and 2029, and “we certainly think we will surpass that.”

The second catch: Research shows that ADUs could be exacerbating long-standing inequities. A 2021 report from UC Berkeley’s Center for Community Innovation found that “despite legislative reforms, the ADU revolution has been slow to reach low-income homeowners of color.” To build an ADU, by definition, you need to first own a home. And homeownership skews wealthy and white.

“Historic policies like red-lining, structural racism, and past policies that have purposely excluded households of color” have resulted in “lower home-ownership rates,” says Julia Greenberg, lead author of a 2022 follow-up report from UC Berkeley’s Terner Center for Housing Innovation and the Center for Community Innovation. “The same people who have been left out of wealth-building from the housing market might be left out of this, too.”

Fryman sees this in practice, finding that ADU builders are “disproportionately much wealthier, much whiter, than the representative Californian, or even Californian homeowners.”

To better understand the barriers keeping people from building ADUs — particularly from lower income households and households of color — Greenberg and Terner conducted a series of focus groups. They kept hearing the same thing again and again: problems with financing.  “High costs were the main barrier,” says Greenberg, “and a lack of financing options tailored for ADUs.”

Most people who build ADUs do so with a home equity line of credit. “You can only do that if you have a ton of equity in your home,” Fryman says. “If you bought a home three years ago, you can’t do that. You’re tapping into home equity that you don’t have.”

Compounding matters, banks and financial institutions have not yet modernized or adapted their policies for ADUs. For those building the ADU as a rental unit, for example, that future stream of rental income can’t be considered in the financing. This strikes some as “conservative” to the point of absurd. As Kadin puts it, “There really isn’t much risk that if you build a housing unit in California, you’re not going to get rental income.”

Or another common scenario: maybe a family is currently spending $1,000 a month to keep an elderly parent in nursing care, and they want to build an ADU to bring grandma closer to home. The ADU would save the family $1,000 a month — it’s effectively new income — and in theory, it should be taken into account when crunching the loan numbers. “But there’s no way for a loan application to address that nuance,” Fryman says.

On top of the financing bottleneck, Terner found that potential ADU builders were often confused and intimidated by the overall process and red tape. “There really is not a lot of information out there to help people through the process,” Greenberg says. “A lot of people were not super clear about the state and local regulations,” with some describing it as “going to court without a lawyer.” Still others had already built informal (and unpermitted) ADUs, and were uncertain as to whether they could now be considered legal.

Terner’s report offered some suggested policy solutions, one of which was the creation of a knowledge hub — a resource center for the ADU-curious. This would be “a place where people can go that’s a one-stop shop,” Greenberg says. “A place that could connect them to the permitting department, or help them find a reputable contractor, or even help them potentially screen tenants.”

The report also recommended reducing the fees, streamlining the permitting process to make it “less costly and complex,” and as Greenberg says, “expanding and investing in programs that provide financial resources to households of color.” Greenberg also recommends that cities enact programs to help people bring unpermitted buildings up to code. “And they need to make sure those approaches are not punitive,” says Greenberg, “which would likely impact households of color.”

And are ADUs truly addressing the housing crisis, or are they just being used as Airbnbs to let wealthy homeowners pocket more income? The Airbnb scenario is less common than one might guess. “Only 8% of new ADUs in California are short-term rentals,” found the Terner report, possibly because many cities (including Sacramento) have laws that forbid or limit the renting of properties for under 30 days.

Even ADU enthusiasts know they are not a panacea for the housing crisis. “ADUs are definitely not a silver bullet,” Kadin says. “But the point is that they’re sort of a no-brainer. They’re a part of the toolkit.” The way Kadin sees it, ADUs have modest upside with virtually no downside. “ADUs are a good thing for all households, including lower-income households,” he says. “To the extent that we can encourage them, great. If we can find better lending tools to allow for everyone to take advantage of them, that’s better.”

There are now some lending tools that can help. The California Housing Finance Agency, CalHFA, launched an ADU Grant Program, which provides up to $40,000 toward pre-development costs such as permitting, site inspection and closing costs.

Perhaps just as important, in September 2022, the City of Sacramento launched an ADU Resource Center as a “one-stop online resource to find information and tools about ADUs and to make it easier for homeowners to plan, build, and operate an ADU,” according to the website. The site has FAQs, budget worksheets, explainers — basically, it’s exactly the solution recommended by Terner.

The city also began providing “permit-ready” design plans, which Soos says should make the ADUs more affordable, as “you don’t have to hire an outside architect or designer.” These are plans the city has already stamped for approval, and they don’t require custom materials. Soos says they are “designed to allow the homeowner to go to the local hardware store and purchase all the materials, if they wanted to build it themselves.”

Soos knows there’s an information gap. She knows that ADUs are still just a goofy acronym to many. “There are a lot of people out there who haven’t considered the idea of building a unit in their backyard, or the benefits to their own family, or their individual wealth, or intergenerational housing.” Soos says. Now her mission is to show people that “this is something that exists, and is attainable.”

Be the first to comment on "Could an ADU revolution be underway in the Capital Region?"