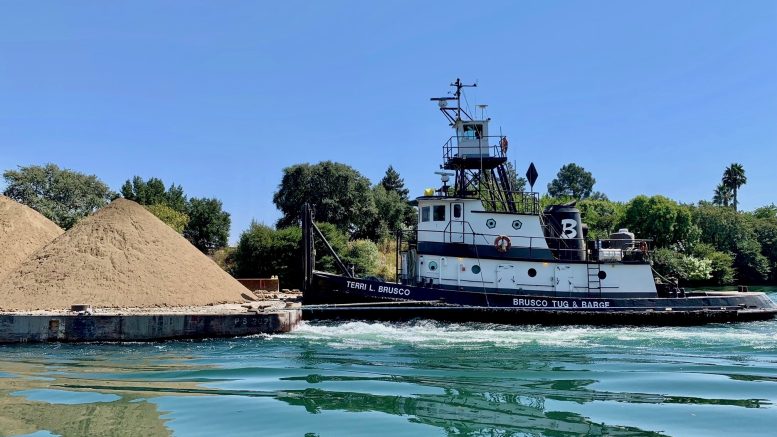 A tug boat plows through the north Delta near the town of Ryde. Photograph by Scott Thomas Anderson

On September 19, Representative Josh Harder (D CA-10) introduced a bill in Congress to prohibit the Army Corps of Engineers from issuing a federal permit necessary for the State of California to build the Delta Conveyance Project, also known as the Delta Tunnel.

Rep. Harder said he is a longtime opponent of the Delta Tunnel project, first voicing his opposition in 2018.

“The Delta Tunnel is a zombie project. Every time we kill it, the Governor brings it back. My bill will put an end to this $16 billion boondoggle once and for all and make sure every drop of Valley water stays right here where it belongs,” said Rep. Harder.

“This is a choice between watering a family farm right here in the Valley, and watering someone’s manicured green lawn down south. I’ll do what’s right for the Valley every single time,” he explained.

The proposed 45-mile-long tunnel would divert water from the Sacramento River before it reaches the Delta and then ship it south from Clifton Court Forebay to big corporate growers and Southern California agencies.

Critics and independent scientists say the tunnel would have a devastating impact on family farms in San Joaquin, Sacramento and other Delta counties, as well as on imperiled fish populations and the ecology of the San Francisco Bay-Delta Estuary. Strong arguments have been made that the project, by diverting more water out of the Delta, would hasten the extinction of Delta and longfin smelt, Sacramento River winter-run and spring run Chinook salmon, Central Valley steelhead, green sturgeon and other fish species.

Harder’s current district, which centers on Modesto, includes part of San Joaquin County, a Delta county that would be directly impacted by the Delta Tunnel. His district also encompasses Stanislaus County.

Harder is now running for District 9 in the November 2022 election. With the redistricting in advance of the 2022 elections, the 9th District is still centered on Stockton. However, Tracy, Manteca, and Ripon – formerly located in California’s 10th congressional district – are now part of this district, while Antioch, Lathrop and Brentwood are no longer in it.

“The Delta Tunnels doesn’t modernize anything,” Harder told the station. “All it does is build a giant tunnel to take the water that our community depends on and sends it down to Los Angeles. I don’t call that modernization, I call that theft.”

Specifically, the bill text states, “The Secretary of the Army, acting through the Chief  of Engineers, may not issue a permit under section 404 of the Federal Water Pollution Control Act (33 U.S.C.  2 1344) relating to the Delta Conveyance Project referred to in the document published by the California Department of Water Resources on January 15, 2020, entitled  ‘Notice of Preparation of Environmental Impact Report  6 for the Delta Conveyance Project.’”

Restore the Delta, a nonprofit Stockton-based coalition opposing the tunnel, praised the introduction of the act.

“Congressman Harder’s bill to stop the Army Corps of Engineers from permitting the Delta Tunnel is an important arrow from the quiver of arrows aimed at stopping the tunnel project,” said Barbara Barrigan-Parrilla, Executive Director of Restore the Delta. “The Congressman is doing his part in reaction to this project which is based on dated water availability data and fails the climate change water management test, and that is a good thing.”

She went on, “Groups like Restore the Delta will continue to do its part through a thorough critique of the project via robust written comments. As in the past, it will take a coalition of thoughtful voices, each doing its part, working toward sustainable water management for California to stop the tunnel once and for all.”

In July, Rep. Harder introduced an amendment alongside Reps. Garamendi & McNerney to prohibit the Army Corps of Engineers from issuing a Clean Water Act (Section 404) permit for the state of Delta Tunnel that would export water out of the Delta, but that effort did not move forward.

The California Department of Water Resources, or DWR, recently released the Draft Environmental Impact Report for the Delta Tunnel Project for public review and comment. The new end date for the comment period, originally set for October, is now Friday, December 16, 2022.