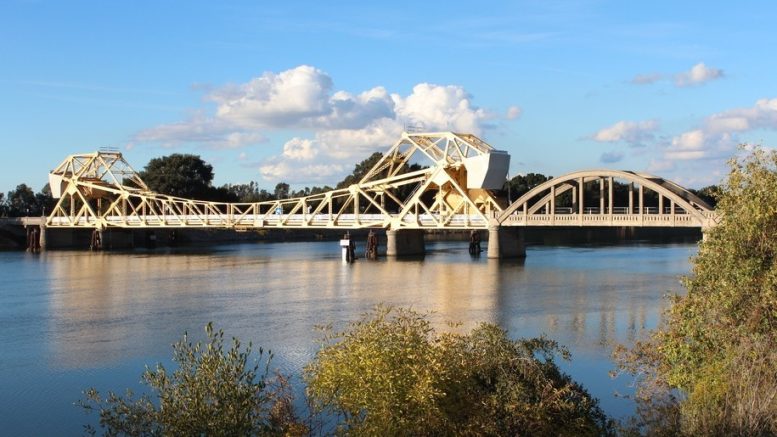 The Isleton Bridge over the Sacramento River in the Delta. Photo by Dan Bacher

The California Department of Water Resources, or DWR, recently released the Draft Environmental Impact Report for its Delta Conveyance Project, better known in the region as the controversial Delta Tunnel, for public review and comment.

The public comment period will end on Oct. 27, leaving less than six weeks for Californians to get their comments in.

The proposed 45-mile-long tunnel would divert water from the Sacramento River before it reaches the Delta, and then ship it underground so that it’s ultimately delivered to San Joaquin Valley agribusiness and to Southern California water agencies.

There are several ways to submit public comment on the Draft EIR, including by email, comment form, regular mail or at a virtual public hearing, according to DWR.

The agency will be hosting two virtual public hearings to receive comments on the proposal (one was already held on September 13). Dates, times, access information and other meeting details are below.

Project opponents say different versions of this same gigantic public works project — the Peripheral Canal, the Bay Delta Conservation Plan, the California Water Fix and now the single Delta Conveyance — have cast a dark, toxic shadow over California water policy since it was first decisively rejected by California voters in November 1982 as the Peripheral Canal.

While tunnel advocates claim it will protect the reliability of water transport infrastructure, address the impacts of sea level rise and improve the Delta’s aquatic conditions, conservationists argue it will accomplish none of these things, instead hastening the extinction of Sacramento River winter and spring-run Chinook salmon, the Central Valley steelhead, the Delta and longfin smelt and the green sturgeon. A number of independent scientists have addressed how the tunnel could destroy an already imperiled ecosystem.

The nonprofit Restore the Delta describes the proposed tunnel as “a 1995 answer to new challenges California faces in 2022.”

“While the Newsom Administration is wasting time and failing to solve serious problems in the present, Restore the Delta is busy tackling the massive EIR document for the latest version of the tunnel,” noted Barbara Barrigan-Parrilla, Executive Director of Restore the Delta.

The data found in the EIR reveals that the DEIR is less protective of endangered fish species and the ecosystem than the previous incarnation of the project, the twin tunnels.

According to a recent blog post by Doug Obegi of the Natural Resources Defense Council, “Yet, inexplicably, DWR’s draft EIR refuses to consider any operational alternatives.  Even worse, DWR’s proposed operations of the Delta tunnel are significantly less protective of the environment than the operations that the National Marine Fisheries Service and other agencies required for the proposed twin tunnel project only a few years ago (California WaterFix), as we explained in this letter to DWR last year.  As a result, all of the alternatives in the DEIR substantially increase water exports from the Delta on average by approximately 500,000 acre feet per year, including significant increases in water diversions in dry and critically dry years (200-300,000 acre feet per year).”

Obegi also writes, “Because the project fails to include environmental protective operational criteria, the DEIR’s modeling (see pages ES-71 to ES-74) concludes that the Delta tunnel (and all alternatives) will reduce the survival of winter-run and spring-run salmon migrating through the Delta, reduce the abundance of Longfin Smelt, increase the number of Delta Smelt that are entrained and killed, and worsen ecological conditions in the estuary (including reducing Delta outflow in dry and critically dry years – see Table 5A-B3.3.4.4-D.).  The status quo in the Bay-Delta is awful for our native fish and wildlife, but the DEIR demonstrates that the Delta tunnel project – at least with the proposed operations – would make things in the Delta even worse.”

Environmentalists stress the best available science finds that the Delta and longfin smelt, Sacramento winter run and spring run Chinook salmon, Central Valley steelhead, green sturgeon – and a host of other fish species – need more water flowing down the Sacramento to the Delta to survive and thrive, not less.

This reporter’s analysis indicates that the entire Delta Conveyance project is based on the irrational and unscientific premise that diverting more Sacramento River before it reaches the Delta will somehow “restore” the Delta ecosystem while providing water supply reliability. I don’t know of any water diversion project in world or U.S. history where taking more water out of a river or estuary has restored that river or estuary. The Delta Tunnel project, if ever constructed, would be no different.

Save California Salmon, an organization dedicated to policy change and community advocacy for Northern California’s salmon and fish dependent people, is encouraging people to voice their opposition to the Delta Tunnel project at the hearings.

“The tunnel will impact the San Francisco Bay, Delta and California’s rivers,” said Regina Chichizola, co-director of Save California Salmon. “At the 2020 scoping hearings on Gavin Newsom’s tunnel, hundreds of Tribal members, youth and others voiced opposition. Newsom obviously did not hear us. Join us for the Delta Conveyance Project DEIR virtual public hearings.” To weigh in or participate in upcoming hearings, see information below: