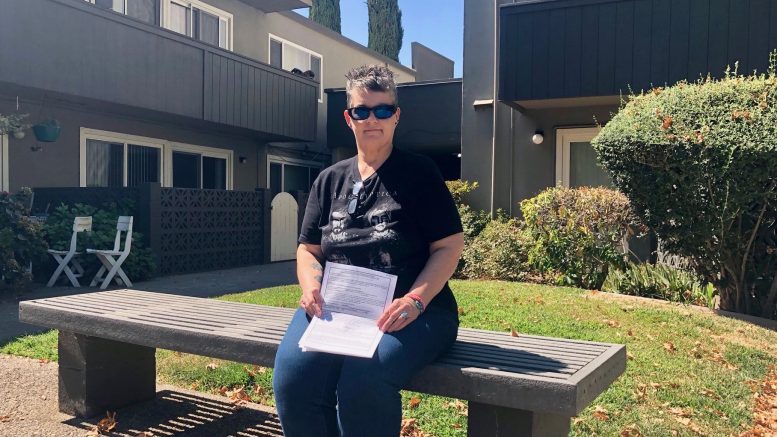 Tammy Freemyer is fighting eviction in Sacramento's Arden-Arcade neighborhood, even though she's repeatedly tried to pay her rent. Photo by Marie Hoffman

Sacramento County has no safeguards for renters, while tenants say the City’s protections aren’t keeping up with reality

At the August 23, 2022 Antioch City Council meeting, former councilmember Ralph Hernandez stood to speak on behalf of a rent stabilization ordinance that was under consideration. He recounted the general challenges in the community: low-income families, including non-English speakers, being taken advantage of with raising rents on properties, non-existent maintenance, broken down appliances and pest infestations. He also mentioned tenants feeling they cannot say anything for fear that they will face retaliatory eviction with nowhere else to go.

Dozens of community members followed Hernandez’s testimony, each with a personal story of how the lack of renters’ protections had impacted their families and communities.

An 11-year-old testified that he feared for his friends becoming homeless. A young mother spent her 25th birthday at the hearing instead of celebrating with loved ones: She told her story of driving all day to deliver groceries through an app for 36 weeks of her high-risk pregnancy, while her spouse worked multiple jobs to meet the needs of their family.

The struggles of low-income Sacramentans are no different, and renters advocates across California consistently identify Sacramento as being one of the worst areas in the state for local tenant protections. The data on this has already been collected: The 2022 Homeless Point in Time Count reported a 67% increase in the local homeless population, more than any other California city or county, and cited housing affordability issues as a major driver. It also noted the “growing need for more preventative and rehousing strategies in the future.”

Some economists project that the problem will continue to get worse until at least the end of the 2023.

These are discouraging realities for many, but advocates say there are things the Sacramento area hasn’t tried yet. They also say that the community needs leadership to look at the broader picture of what’s happening to the housing landscape. County Supervisor Sue Frost in her September 1, 2022 digital newsletter, states a controversial – many say, narrow – view of the problem:

“We continue to spend money on new housing options, as well as drug/alcohol/mental health treatment (the things I consider to be the root cause of homelessness,),” Frost wrote, “but our homeless population is growing at a rapid pace even as we massively increase homeless spending.”

Frost didn’t clarify what new housing options she is referring to, but some experts think misidentification of the “root cause,” and ways to address it, are the real reason the problem continues to grow.

In Sacramento, there is no shortage of skepticism that a 67% increase in homelessness was mainly driven by mental health and/or substance addiction. That’s led to a concern something farther reaching and systemic is afoot, and that ‘something’ is a lack of affordable options, as outlined by the 2020 Analysis of Impediments to Fair Housing Choice (the AI Report). The average Sacramentan has likely not read through the 433-page report, but, being that it is linked to the county’s Fair Housing website, advocates expect that county leadership is at least familiar with its findings.

However, neither the 2020 AI Report, nor the 2022 Point in Time Count Report, touch the issue of tenant protections or rent stabilization. That discussion occurs in a silo – a silo that critics say local governments are content to defer to the state.

“State law should not be the limits, more like a minimum of what a city can do,” says Leah Simon-Weisburg, Legal Director for the Alliance of Californians for Community Empowerment, or ACCE.

In at least one respect – an exemption for all single-family units and condominiums – the local Tenant Protection Act is actually less protective than the state law.

The passage of AB 1482 has, nonetheless, coincided with a statewide rise in homelessness.

More local governments are taking action, as evidenced by the growing patchwork of stronger tenant protections. But the overall picture is confusing: On August 23, the same night Antioch City Council voted to approve a 3% maximum annual rent increase, the city and county of Sacramento both voted to force homeless citizens into a shelter system that has yet to materialize.

In 2015, as foreclosures were finally coming to completion from the 2004 to 2008 subprime mortgage bonanza, Oakland pivoted from being one of the urban areas with the worst tenant protections, to having some of the strongest.

According to Simon-Weisburg, “Oakland addressed the foreclosure crisis starting in 2015. Over the last five years there’s been a movement to strengthen and update those protections.”

Seeing that example, tenant groups say it’s time for Sacramento to give serious consideration to achievable renters’ protections which will prevent further displacement of citizens onto the streets.

Due to a moratorium on rent increases and evictions currently in place, Oakland has a 3% cap on allowable rent increases from August 1, 2022 to July 31, 2023. Sacramento tenants just learned that their rents can be increase by 10% this year, adding to the financial burden of 40-year record high inflation. Last year, the increase was 9%, which means that some have seen a 19% increase over two years. These stark metrics have been set even as more and more tents and occupied vehicles have been added to Sacramento County’s landscape.

Arguments against tenant protections are often made in defense of individual or independent landlords, many of whom operate ethically and are an integral part of healthy communities. In reality though, measures or exemptions intended to benefit this group actually end up benefiting corporate landlords, real estate speculators and private equity groups, to the detriment of local tenants and would-be “mom and pop” landlords alike.

Who benefits from the exemption for all single-family units in the city’s Tenant Protection Act? Invitation Homes, a multibillion-dollar corporation that was once part of the Blackstone Group (Blackstone became the largest private property owner the Sacramento at one point) specializes in single family homes. Numerous renters who have dealt with Invitation Homes tell SN&R that they are great at buying properties, but not so great with repairs, permits or maintenance.

Thousands of Sacramento rental units have continued to be acquired by corporate speculators, and the goal for these additions to their portfolios is to increase rents. It’s been widely argued that displacement of lower-income tenants, via campaigns of harassment, is a demonstrated part of their business model.

If Sacramento County had an anti-harassment ordinance, as the City of Los Angeles passed in June of 2021, perhaps Tammy Freemyer would not be in the position she’s in at the moment

After 15 years of living in an apartment in the Arden-Arcade area, Freemyer has been served with an eviction notice for not paying her rent. The problem is, she says, that she’s been trying to pay her rent for months. This specific landlord tactic, refusing to accept rent payment, is one of many actions flatly prohibited by the Los Angeles ordinance.

After Freemyer’s complex was purchased by Trion Properties, one of several in the Sacramento area purchased by the equity firm last November, on-sight manager hours were reduced to a couple days a week instead of 5 days a week. Tenants say maintenance suffered and the office mail slot ceased to be a reliable place for them to deposit their checks. Freemyer’s check was among those that went missing. Making matters worse, a new utility billing service used by the company, ConService, hiked utility bills for tenants by as much as 11-times the flat rate. While the utility issue was fixed after reporting by ABC Channel 10, those at the complex argue it’s clear they are in a hostile landscape.

Freemyer’s case is still making its way through the courtsystem. After 15 years of having no issues with the complex’s previous owners, there’s now a chance she could be forced to leave with an eviction on her record. This could likely make it impossible for her to find her next apartment.

In the face of these challenges, Freemyer is keeping a cool head, saying. “I’m just trying to remain calm and focused on the truth. I don’t play games like they do.”

4 Comments on "Hit by inflation, cost of living hikes and corporate landlord profiteering, Sacramentans want to know why their tenant protections are so weak? "