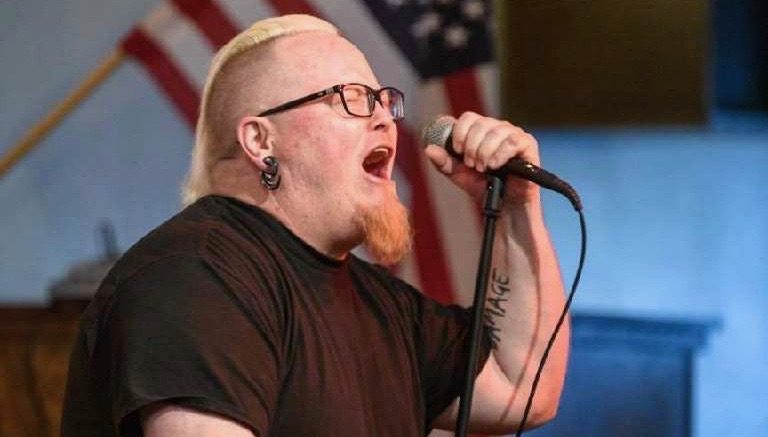 Local comedian Gavin Myers gets brash with a Cameron Park crowd at The Stage at Burke Junction. Courtesy photo

On a dare from a friend, Chadd Beals took to the stage as an open-micer in 2011. It wasn’t long before he was booking shows for traveling comedians, paired with local acts, under the name Homegrown Comedy. Beals has hosted these gut-busting moments at the Inferno Sports Bar in Citrus Heights, the Highway House in Rancho Murrietta and Sacramento’s well-known laugh vault, the Punchline.

Now, Beals is excited about a new place to lure cutting edge standups to – and it’s a theatre-in-the-round.

The most recent landing spot to develop Homegrown’s network of alternating humorists is tucked away in Cameron Park at The Stage at Burke Junction. Many Californians remember Burke Junction as the frontier-themed shopping center just across from the recreated Old West hub, Sam’s Town. The twin villages had a kind of heyday in the late 1980s. Sam’s Town is a memory but Burke’s Junction remains. Filled with several popular restaurants, a jewelry studio and a large tavern, its alleys feel like a throwback to another time. Lately, the junction’s theater has been hosting dramatic productions, including most-recently, “Emilie: La Marquise Du Châtelet Defends Her Life Tonight.”

On Oct. 21, “The Stage” and Homegrown Comedy will launch their next laugh-inducing event, which features headliner Mike Betancourt, along with Morgan Anderson and Beals himself. This will be Homegrown’s last comedy night for the year, though Beals has a packed calendar of Friday evening shows ahead in 2023.

“It’s actually going to start taking off really well,” Beals predicted. “We have a huge show in October with Mike Betancourt … He really gave me tons of advice when I started out in comedy and all through my comedy career.”

For Beals, working with Burke Junction’s owner, Bill Glasser, felt like a no-brainer because of the latter’s passion for the arts.

“He’s really focused on putting on good shows, whether it be their plays or their comedy,” Beals stressed. “Most owners are money hungry.”

Glasser has enjoyed some successful draws at the comedy shows so far. He’s also noticed, in some cases, crossover in the crowd: That means people are hearing about the comedy while attending The Stage’s dramatic plays – or discovering its theater productions in the same fashion as the laughs are rolling.

“The cool thing is that there’s so little out there in terms of cultural amenities, people are always interested in trying out something new,” Glasser observed. “The first show was a really big hit … a sellout. The shows have been good; really amazing talent and some local talent that’s still learning the comedian chops.”

Glasser’s assistant, Holly Sanchez, manages The Stage at Burke Junction. According to her, the theater is located in a part El Dorado County that even locals are still catching on to. She said the accolades for recent stage performances, and the “off-the-charts funny” comedians Beals has scheduled, is starting to give the venue an upper hand.

“The word’s kind of starting to get out there to the community: they have an option now to go right there for some great theater and some fantastic comedy,” Sanchez noted. “In the last year, I feel like it’s transformed — just The Stage, in general, has. And we’ve packed it; we’ve sold it out.”

Beals stresses that there’s a wealth of hilarious talent in the region. His mission is to pair them with nationally touring comedians, thus offering the burgeoning acts an opportunity to experience bigger crowds and more exposure.

“I have a ton of comedians that I’ve been working with over the years,” Beals reflected. “Sacramento has a huge local scene of comedians and [I want] to bring them in to feature, and open, for the acts.”

The Stage’s next theatrical production, a dark comedy called “Good People,” runs Fridays, Saturdays and Sundays through Oct. 2. Glasser said he’s excited about the excellent talent in its cast, noting that he hopes to regain the momentum his venue enjoyed in its first year, 2019. That was before the pandemic made its gem lights go dim for more than 24 months.

The stage-owner added that, over the last year, he’s been getting a feel for the room, surprised by how much the comedians have enjoyed the space. Glasser always makes it a point of attending all of Beal’s Homegrown Comedy dates.

“Every show. I go to every show,” Glasser proclaimed. “It’s interesting, because comedy — we do theater over there — it’s a whole different animal when you have four weeks of rehearsal and all of the props and lighting cues and sound design. Just having the show — walk in and, with a microphone and a light bulb — it’s wonderful.”

For tickets to upcoming comedy and theater shows at The Stage at Burke Junction, visit www.stageatburke.com

Be the first to comment on "Bringing Cameron Park laughs, The Stage at Burke Junction is area’s newest venue for drama and entertainment"