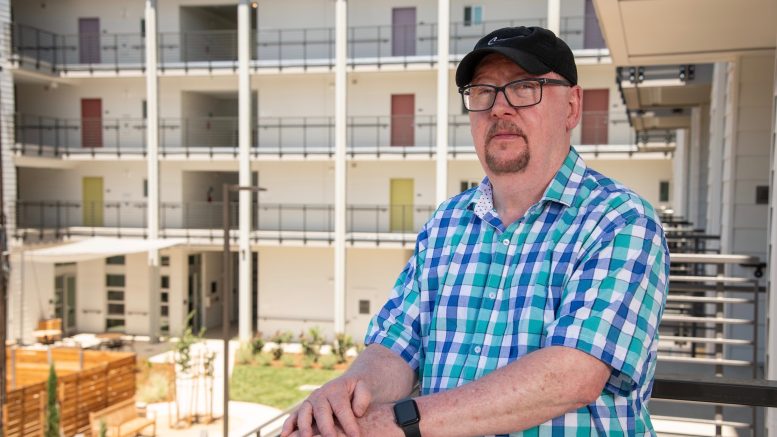 Michael Ryan poses on the balcony of his apartment at the Lavender Courtyard apartment complex in Sacramento in July. Photos by Salgu Wissmath

Michael Ryan is ready to focus on himself. And he’s found the perfect place to finally do just that.

On a recent summer day, the 67-year-old retiree, dressed in a crisp lavender and blue plaid shirt, a baseball hat atop his head, relaxes outside at a table on the patio at Lavender Courtyard, a new income-restricted, three-storycomplex designed to serve LGBTQ seniors. It’s quiet except for the sound of birds chattering and upbeat pop music drifting out an upstairs window.

Shading his eyes with his hand, Ryan looks up and points toward a door on the second-floor balcony. “That’s my place,” he says, his voice happy. “Everything is new. If you haven’t ever had the chance to move into a brand-new place, please do because it will make you feel so good.”

Lavender Courtyard, located in Midtown Sacramento at 16th and F Streets, has 53 units (with one reserved for the site’s property manager), serving seniors ages 62 and up who pay affordable rents based on income as determined by U.S. Department of Housing and Urban Development guidelines, which caps rents at 30 percent of the tenant’s monthly adjusted income. With 1-and 2-bedroom floorplans ranging in size from 530 square feet to 824 square feet, it’s not a requirement that residents identify as part of the LGBTQ community, but the majority do.

Owned and operated by Mutual Housing California, Lavender Courtyard is part of the nonprofit group’s alliance with Services & Advocacy for GLBT Elders, better known as SAGE, a national organization for LGBTQ seniors.

According to data from SAGE, 48% of elder same-sex couples have experienced some form of housing discrimination. With the United State’s LGBTQ elder population expected to grow from 3 million adults over the age of 50 to 7 million people by 2030, such partnerships are part of a growing effort to address a growing need. And with Sacramento experiencing a housing crisis and skyrocketing numbers of unhoused people, more affordable housing is critical.

For Ryan, Lavender Courtyard isn’t just a nice, affordable place to live, it’s a place where he can comfortably live authentically as a gay man. “I can change how I appear to others as necessary, and sometimes I just do it without thinking — it’s self-preservation,” he says. “But it’s nice to be able to be out, to be who you are.”

A fear of living “out” is one of the biggest barriers to safe senior housing for gay, queer and trans populations. According to SAGE data, elder LGBTQ folks are twice as likely to be single and live alone and four times less likely to have children who can help out, which can present significant challenges when it comes to affordable housing and health care. This, along with moving into a community that’s not LGBTQ friendly, may result in people hiding their identities as a matter of survival, says Roberto Jimenez, Mutual Housing’s chief executive officer.

“They go back into the closet when they haven’t been there for a large part of their lives,” Jimenez says. “That’s because of fear and social pressures and discrimination.”

Alleviating these fears and risks is part of Mutual Housing’s mission. “We want to help connect people to places that feel safe where they can get the care they need,” he says.

The Lavender Courtyard project launched about a decade ago when a group of residents who lived and worked in this neighborhood came together to discuss the possibility as they and their friends started to age. Sacramento’s historic Lavender Heights district in Midtown made for a natural location, Jimenez says.

Building an affordable housing development usually takes between two and five years to come to fruition, but specialized housing can take even longer, Jimenez says. “When you’re serving a particular population, they have their own particular needs,” he says. “And [we need] to design the entire project physically and in terms of programming to serve those needs.”

Initially, Jimenez says, the group of residents worked with architects before eventually approaching Mutual Housing to discuss the initiative. Once Mutual Housing agreed to take on the project, they partnered with SAGE, which aids with training and staff needs. Currently, SAGE works with affiliates in 29 cities across the country and provides LGBTQ cultural competency training in areas such as caregiving, and legal or financial services for staff at various facilities, including long-term care centers and independent living complexes. In return, Lavender Courtyard serves SAGE in furthering its advocacy efforts as a model example.

In its beginning stages, Lavender Courtyard was part of a housing solution industry still in its infancy. At the time there were only five other similar senior complexes in the nation in cities such as San Francisco, Chicago and New York.

After the Mutual Housing-SAGE partnership was in place, funding needed to be secured. That’s typically the biggest challenge for such projects, Jimenez says. In most cases, funding starts with tax credits but usually only covers between 50% to 75% of the overall cost.

“That’s why these projects take so long,” he says. “We have to fill those gaps before you apply for the tax credits.”

In short, Mutual Housing California needed to create money out of nothing. It succeeded, in part thanks to $2.5 million in foundation money from the Harry and Jeanette Weinberg Foundation, a charitable organization dedicated to meeting the needs of people experiencing poverty with an emphasis on housing, health and education. The rest of the funding came from various sources including $1.9 million from the City of Sacramento’s Housing Trust Fund and $11.3 million from the California Multifamily Housing Program. The land was purchased in 2014 with an $800,000 acquisition loan from NeighborWorks Capital. The finished project came in at $27 million.

Money wasn’t the only obstacle. It’s not uncommon for neighbors to object to new developments for any handful of reasons, and Lavender Courtyard was no exception. Jimenez says it’s nearly impossible to determine if any local resistance was about affordable housing or an anti-LGBTQ bias, but ultimately such opposition didn’t matter because the Sacramento City Council put its full support behind the project.

The Lavender Courtyard complex broke ground in October 2020. The complex opened to applicants via a combination lottery and open portal process earlier this year. Hundreds of people applied, and residents started moving into apartments at the end of May. As of August, all units had been rented.

Steven Root, communications director for Mutual Housing, calls Lavender Courtyard “a shining example” of what is possible in other cities.

The completed complex is a modern design with ample windows, sleek built-in cabinetry and laminate floors. There’s on-site laundry, elevators and a spacious community room with a kitchen that overlooks the expansive courtyard. There’s also a barbecue and picnic area, as well as a community garden and recreation room, and bike racks.

Kinship is a key focus, Root says. “We want to help our residents shape our community,” he says. “Mutual Housing’s philosophy is to make sure we’re tangibly empowering our residents at the ground level. This is not just a hand-out.”

Lavender Courtyard is touted as a “green” building with solar rooftop panels, which help reduce utility costs, and all electric appliances. With on-site property management and controlled access, it’s secure and private but also immenselywalkable. Nearby there’s a deli and a doughnut shop. There’s also a Target and several restaurants just a few blocks away on J Street. That’s just one of the many reasons Ryan wanted to move here.

Ryan spent years as an insurance underwriter. When the company he worked for closed up its San Francisco office and offered to relocate him to Oklahoma, he decided to move back to his hometown of Cedar Rapids, Iowa — the very place he’d left in 1976 because it didn’t feel like a safe place to be gay. In Iowa, he had a small pension from the insurance company but still needed to work so he took on another insurance job.

“Believe me, I tried to set myself up for retirement,” Ryan says. “I’ve lost in the stock market so many times. You can try and try but life just happens.”

After his mother died, Ryan finally retired, moving back to Sacramento in 2020 where he had family, into a small apartment on Auburn Boulevard. It was fine, he says, but at only 300 square feet, a bit cramped. It was also located in a sprawling neighborhood that required him to drive everywhere.

Then he saw a TV news segment on the Lavender Courtyard complex. He applied through a lottery process and  was “elated” to be accepted.

Now, Ryan’s not only doubled his living space, but he’s also sold his car and does most of his errands on foot. He’s thinking of getting a small dog. Although Ryan enjoys watching General Hospital on weekday afternoons, eventually, he’d like to get a part-time job, perhaps at Target or as a receptionist in a nearby office. After spending the last two years largely in pandemic lockdown, he says he’s also craving a sense of community and looking forward to curating group activities at Lavender Courtyard.

“What Mutual Housing has done here is important and terrific,” he says. “I’m hoping this model translates to other cities, big and small.”

Be the first to comment on "Sacramento’s new Lavender Courtyard keeps its promise of safe, comfortable housing for LGBTQ seniors"