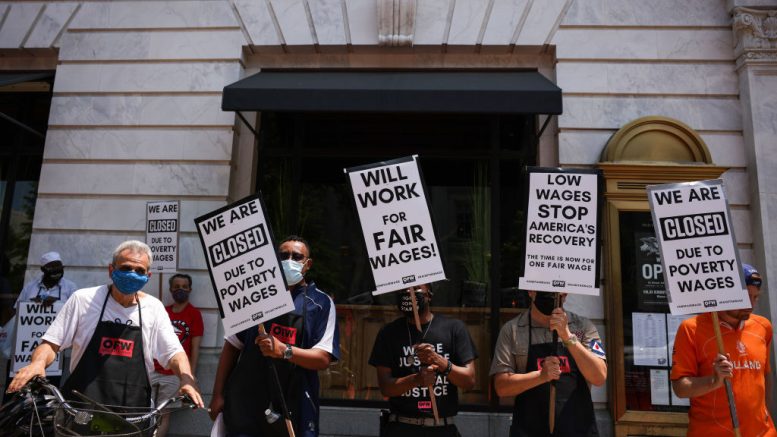 But where they don’t, millions of workers are stuck at the record-low federal floor.

At $7.25 per hour, the value of the federal minimum wage is at its lowest point in 66 years. It has been 13 years since the last increase — an all-time record. Since the inception of the Federal Labor Standards Act, instituting the minimum wage, in 1938, the longest periods of congressional inaction on raising the wage floor were two decade-long stretches, from 1981 to 1990 and again from 1997 to 2007.

The current cost to workers? Those who are paid the federal minimum in 2022 are essentially  earning 27% less than did their counterparts in 2009, the time the last increase took effect.

Those are the conclusions of a study recently published by the Economic Policy Institute, and they are not likely to be countered anytime soon. After the Raise the Wage Act failed in the U.S. Senate last year, experts say there’s been no push to update the federal minimum to reflect the drastic changes in the economy since 2009.

To make up for federal inaction, state legislatures and local governments have implemented their own wage increases — and the pace of their activity is quickening. The result: a crazy quilt of pay rates across the country.

And even where state and local minimums have been boosted, those wage rates still fall well below any reasonable estimate of what it actually costs to live in specific areas — varying wildly and often erratically, researchers say.

Since the beginning of the year, 24 states and the District of Columbia have raised the minimum wage for workers, from a 22 cent adjustment in Michigan to a $1.50 per hour boost in Virginia. All of those states, as well as the District of Columbia, already had minimums that were higher than the federal mandate; the closest to it was Montana, which ended 2021 at $8.75 before moving to $9.20. (You can find the EPI’s interactive wage tracker here.)

By contrast, workers in 20 states are still subject to the federal minimum, either because the states set their lowest wage rates to coincide with that number or because they have no established minimum, meaning the federal rate prevails. Two states, Georgia and Wyoming, have $5.15 minimum rates on the books but must pay at least $7.25 per hour under the labor standards act.

Some 30 states and D.C. have set minimum wages at higher levels than the outdated federal law requires. “But it’s what is happening on the local level that is truly remarkable,” Cooper said.

From a single city, San Francisco, enacting its own wage law in 2003, more than 50 localities have now taken matters into their own hands, setting rates above their state minimums. By the EPI’s count, 44 cities or counties have raised wages in 2022 alone, the vast majority of those via automatic inflation adjustments.

That activity is so far confined to eight states that already have minimum wages above the federal standard, according to the Pew Research Center. California accounts for three-fourths of the local action, primarily around the Los Angeles and San Francisco areas, with their skyrocketing costs of living.

By contrast, 20 states in which the federal law still applies do not allow cities and counties to set their own minimums. That means workers in those states are stuck with the $7.25 figure, which is losing buying power by the day.

The EPI arrived at its shrinking valuation of the minimum wage by applying the Consumer Price Index through the years, Cooper said. The index, compiled by the federal Bureau of Labor Statistics, is a measure of the average change over time of the cost of a bundle of basic goods and services to an urban U.S. consumer. Over the 12 months ending in June 2022, the CPI rose 9.1% — the largest such increase in more than 40 years.

A minimum pay rate is just that. A 2020 analysis by the BLS found that only 247,000 U.S. workers earned exactly $7.25 per hour. Another 865,000 actually earned less than the minimum, likely because their jobs fell outside the list of those for which the minimum is mandatory.

One problem, critics say, is that the low, unchanging federal minimum means that states can set rates above it and still not come close to mandating wages that actually allow their workers to afford basic necessities.

Almost a third of the U.S. labor force, roughly 52 million workers, is paid less than $15 an hour, according to Oxfam, a global organization that pushes equality reform. That $15 rate has repeatedly been cited by researchers as the least that workers should earn in order to secure a basic standard of living. (California’s current minimum wage is $15, and set to rise to $15.50 in 2023.) Oxfam researchers analyzed their data before 2022 state and local increases took effect, although those changes wouldn’t affect the national numbers in the way that a pure federal raise would.

There are deep racial, gender and ethnic considerations. Most low wage workers in the U.S. are people of color and women. Oxfam’s data indicates that while 26% of white workers earn less than $15 per hour, the figure jumps to 46% for Latino workers and 47% for Black workers. Among men, 25% earn less than $15; for women it’s 40%, affecting some 31 million workers.

“Given that a wage of $15 per hour translates to only $31,200 per year for a full-time worker at 40 hours per week, the results of this research are shocking and unacceptable for any society, let alone one of the richest countries in the world,” wrote Kaitlyn Henderson, author of the Oxfam report.

Roughly six in 10 Americans favor raising the federal minimum to $15, a percentage that has held fairly steady in various polls, but the results break down severely along party lines. After Sen. Bernie Sanders (I-Vt.) failed in his attempt to attach a $15 federal minimum to last year’s massive COVID relief package, there has been no significant movement on the issue. None is expected soon.

In some states, voters have taken charge, pushing wage hike initiatives to public referendums in places such as Missouri and Florida. But as long as Congress fails to act and passes the responsibility along to states and localities, wages for millions of workers nationally will not provide a path to a secure life, researchers say.

“It’s the same ideological forces that have prevented a lot of reasonable policy-making from happening at the federal level,” said the EPI’s Cooper. “But the stakes are really high with this one.”

Be the first to comment on "As Feds dither, states and localities raise minimum wages"