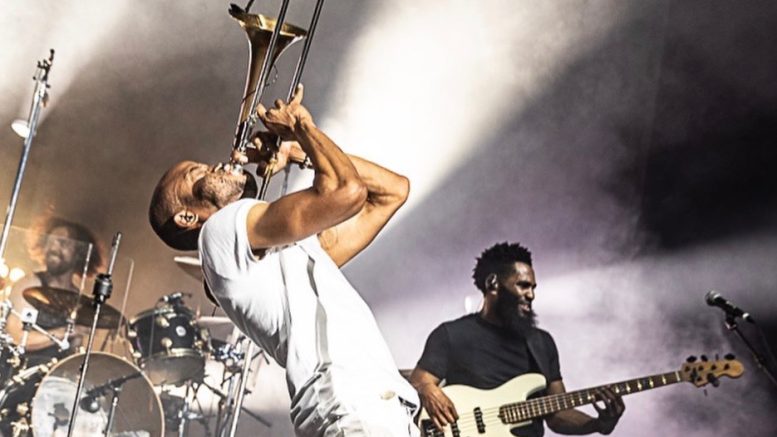 Trombone Shorty will play in Grass Valley Aug. 5 at the Center for the Arts. Courtesy photograph.

Grass Valley’s Center for the Arts, Placerville’s Green Room Social Club and Sacramento’s Concerts In the Park and Sofia Theatre all end the heatwave strong

New Orleans’s native-son-dynamo will bring the insane energy of his live act to the region on Aug. 5 as he takes the stage at the newly renovated Center for the Arts in Grass Valley.

Troy Andrews, known across the world as Trombone Shorty, is an author, philanthropist, composer, bandleader and all-around brass badass who’s been exporting the spiritual power of the Crescent City’s Tremé neighborhood near and far, hooking people on it with his explosive combination of funk and street jazz.

Since the time he was old enough to steady a trombone on his shoulder, Andrews has been performing with the likes of The Carlsberg Brass Band and blues legend Bo Diddley. By the time Andrews was a teenager, he was tapped by Lenny Kravitz to join the band he assembled for his Electric Church World Tour.

As a grown performer, Trombone Shorty has been sharing the musical mysteries of New Orleans culture by combining a rock star’s ethos with the charismatic allure of a second line jazz march, then baking that with original R&B ingredients and the roots of southern funk. He’s since shared the stage with everyone from the Red Hot Chili Peppers and the Foo Fighters, to Pharrell, Bruno Mars and the Zac Brown Band. Extremely dedicated to the streets that he grew up on, Andrews has also launched the Trombone Shorty Foundation, which donates quality music instruments to local schools and children in support of youth education.

More recently, Shorty took over a recording studio in the Lower Garden District of New Orleans, following the release of his latest album, Parking Lot Symphony.

“Having my own studio meant that the band and I could capture stuff in the moment any time we were feeling inspired,” says Shorty.

Now, his 2022 release Lifted finds the GRAMMY-nominated NOLA icon and his bandmates tapping into the raw power and exhilarating grooves of their legendary live show, channeling it all into a series of tight, addictive performances that blur the lines between different genres of American music.

“The whole time we were making Lifted, I couldn’t help but think about how much fun it would be to get onstage and play it for an audience,” Shorty recalls. “Usually when I make an album, I record the songs first and figure out how we’re going to present them live afterwards, but with this record I was in the studio imagining the lights flashing on the hits and the audience singing everything back to us. I could see the whole thing in my head.”

Don’t miss Trombone Shorty’s “Voodoo Threauxdown” tour stop at Grass Valley’s Center for the Arts on August 5 at 8 p.m. Tickets are $62 to $82 at: thecenterforthearts.org.

Mod Sun, JMSEY, A Summer Alive and BloodHoney – July 29 at Sacramento’s Concerts In the Park

Having just published a big feature on what Concerts in the Park means to the heartbeat of Sacramento, SN&R encourages readers to continue supporting its exciting return as the summer soldiers on. The next show for the series, this Friday, features as its headliner the mighty energy of rock-pop performer Mod Sun, whose duet “Flames” with Avril Lavigne is blowing up Youtube. Leading up to that will be the all-too infectious sounds of singer-songwriter JMSEY. The evening also features the fast-jamming guitar crunch of A Summer Alive, as well as the catchy power-punch of BloodHoney. DJ Robbie & DJ Eddy (HOF) will be spinning throughout the night. The show starts at 5 p.m. at Caesar Chavez Plaza in Downtown Sacramento.

Mama Foxxy and the Whiskey Gypsy Rebels will bring their mix of hard-swinging sultriness and rhythm-driven sass to the Green Room Social Club in Placerville on Aug 5. With elements of electric country, drum-loving rock and pure honky-tonk bravado, Mama Foxxy is starting to get air-play on the region’s radio waves. The band’s upcoming show also features performances by Tiger Shade and Accidents at Sundown. The action starts at 8 p.m. Now opened for more than a year, The Green Room Social Club continues to prove itself one of the area’s go-to spots for local and touring musical talent. General admission tickets are $10 in advance, $15 day of show.  Table tickets are also available at: https://tickets.clubgreenroom.com. The Green Room Social Club is located at 251 Main Street, Placerville.

Paul Thorn – Aug. 18 at The Sofia Theatre in Sacramento

The most keepin’ it real man in American blues will hit Sacramento Aug. 18, commiserating with his audience at The Sofia through songs like “It’s a Great Day to Whup Somebody’s Ass.” Paul Thorn is considered an innovator for bringing Delta sounds, rock vibes and Southern Americana into one act that still manages to offer startling originality. Born in Tupelo, Mississippi, and raised among the same spirits (and some of the actual people) who nurtured the young Elvis generations before, Paul Thorn has rambled down back roads and jumped out of airplanes, worked for years in a furniture factory, battled four-time world champion boxer Roberto Duran on national television, and performed on stages with Bonnie Raitt, Mark Knopfler, Sting, and John Prine among many others. He’ll take the stage at Sacramento’s Sofia Theatre on Aug. 18 at 7 p.m. Tickets are at: https://bstreettheatre.org/music/paul-thorn. The Sofia Theatre is located at 2700 Capitol Avenue in Sacramento.

TOPICS:Paul Thorn at The Sofia at B StreetPlacerville's Green Room Social ClubSacramento Concerts in the ParkTrombone Shorty in Grass Valley