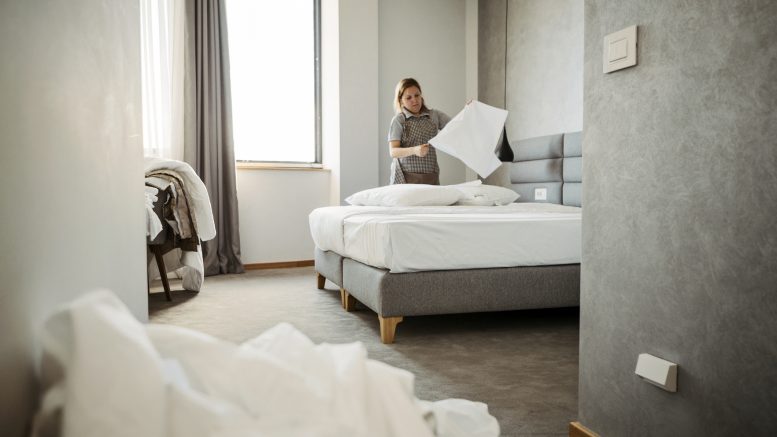 Maid working at a hotel

The L.A. City Council’s recent approval of a hotel worker protection measure is part of a growing trend.

When the Los Angeles City Council approved a measure last month strengthening pay and security protections for hotel workers, it wasn’t merely a victory for union organizers and the thousands whom they represent. It was also a point on the timeline of an emerging pattern: local governments doing the work that the federal government either can’t or won’t.

“It’s a reflection of a lack of leadership at the federal level,” Kevin de León, the L.A. councilman who championed the hotel ordinance, told Capital & Main. “Not much happens, really, in Washington, D.C. — it’s become a sideshow in the American body politic. And when there’s a lack of leadership, the local government should be able to step up and set the rules.”

They are the kinds of actions that, in another time, might have been dictated by Congress and instituted on a national level. But with the federal government largely dysfunctional and worker rights banished to afterthought, the cities are doing it for themselves.

“Municipality by municipality isn’t ideally how you would do this. In the ideal, you’d have a Congress that protects workers and honors the will of the majority,” said Terri Gerstein, director of the State and Local Enforcement Project at Harvard Law School’s Labor and Worklife Program. “But at the same time, these are ways to bring real change for the workers who need it and who aren’t getting the protections elsewhere.”

Gerstein, a senior fellow at the Economic Policy Institute, co-authored a recent EPI report that documents a remarkable range of activity among local governments in the areas of worker protection — territory that, until perhaps a decade ago, almost never fell to them to design and implement.

Among the EPI’s findings, many municipalities have moved aggressively to accomplish the following:

“It’s not just the coasts,” Gerstein said. “It’s happening in Denver, Chicago, the Twin Cities, smaller municipalities, larger municipalities. This is a real sea change in terms of localities seeing this as part of what they do now for their people. Historically, that hadn’t been part of the picture.”

Congressional neglect — or action that is outright hostile to workers — has become the norm over the years, researchers and activists say. Outdated federal labor laws discourage unionization and offer little in the way of worker protection. The last time Congress raised the federal minimum wage was in July of 2009; it has remained at $7.25 per hour since then, 13 years and counting.

Many states have raised that wage floor themselves, but in others, local governments find themselves taking on the responsibility. That can’t be accomplished everywhere, since many states have preemptive laws that prohibit localities from establishing their own wage rules — or other labor ordinances, for that matter.

California has a $15 per hour minimum wage and may raise it again as soon as next year, but it allows localities to set rates above that figure. That is part of a progressive overall approach to both worker protection and local government involvement — and those factors came together in the chambers of the L.A. City Council.

The Los Angeles hotel measure was by no means the first in the area to pass; similar ballot measures to protect workers had already been adopted in Santa Monica, West Hollywood, Glendale and Long Beach. But the L.A. action was notable both for its scale and the fact that the City Council eschewed pushing it off to a November voter referendum, opting to adopt the ordinance immediately. It will take effect around the first of August.

“Today marks the moment when this so-called economic recovery pivots from CEO greed to worker needs,” said Kurt Petersen, co-president of UNITE HERE Local 11, which led a petition drive that netted more than 100,000 signatures to qualify the initiative for November. “We are at long last on the road to rebuild an economy rooted in fairness and dignity.” (Disclosure: UNITE HERE is a financial supporter of Capital & Main.)

The L.A. ordinance places a square-foot limit on the amount of room cleaning a hotel worker can be asked to perform in a normal shift; provides for overtime pay in certain situations; requires hotels to provide workers with panic buttons to protect them against sexual harassment; and forces hotels to abandon the practice of skipping daily room cleaning unless guests specifically ask otherwise.

That last point is significant. For decades, the standard among hotels was to automatically offer daily room cleaning — but during the pandemic, hotel conglomerates realized they could wring further profit from their operations by discontinuing the practice in the name of guest “safety.” Instead, guests had to ask for their rooms to be cleaned; otherwise, they might go close to a week without service.

It’s a pernicious policy meant to cut down on worker shifts, and one that hotel executives openly touted as a permanent strategy going forward — one that would save them hundreds of millions of dollars. UNITE HERE Local 11 estimated that the plan could cost nearly 181,000 jobs nationally and $4.8 billion in annual lost wages.

Last fall, the union took aim at a single hotel in Los Angeles, the downtown DoubleTree by Hilton, and its franchised owners eventually agreed to repeal the policy — pure proof that the no-cleaning standard was simply arbitrary. The push to restore worker protections in the area quickly began to gain momentum, aided by local governments policing their own municipalities.

The L.A. plan was loudly opposed by business and hospitality groups, which said the ordinance would increase costs and thus room rates, potentially chasing off tourists. The Hotel Association of Los Angeles also suggested that a return to daily cleaning would involve significant upticks in water and energy use, ignoring the fact that rooms that go untended for days require extensive work and the use of extra chemicals to clean and disinfect.

“We’re still not recovered [from the pandemic],” HALA spokesman Pete Hillan told Capital & Main. “Convention business is just coming back. International travelers are just being cleared. To put in more regulations just as we’re getting off our knees seems tone-deaf — and we really objected to the pace at which this is all being done. We wanted it to go to November and be placed before the voters.”

The council had other thoughts, flowing in the direction of protecting a class of workers decimated by the pandemic and the mass layoffs that followed a near-shuttering of the hotel industry. “These workers were devastated — 90%, 95% unemployment,” said de León. “They’re the backbone of this economy. We need to protect them.”

In November 2020, Los Angeles County established the Public Health Councils system, through which workers formed boards to ensure that employers were complying with COVID-related regulations. It’s one of a number of examples of localities around the country creating boards dedicated to enforcing worker protection rules.

Harris County, which takes in the massive Houston metropolitan area in southeastern Texas, last year created the Essential Workers Board, which advises the county on policies and practices that support employees in a number of service-related industries. The city of Detroit passed an ordinance that creates standards boards to investigate conditions in specific industries and make recommendations on pay, benefits, training opportunities and schedules. Several counties in Florida, including Broward, have created wage theft enforcement or mediation programs.

Too, communities are finding ways to band together to take up the protections that once might’ve been the purview of the federal government. After San Jose created its Office of Equality Assurance, which administers and monitors the city’s wage policies and public contracts, at least nine local jurisdictions — Sunnyvale, Santa Clara and Redwood City among them — contracted with the office to enforce their own policies.

“The biggest economy of scale, of course, would be putting some of these things in place at the federal level,” Gerstein said. “But in this case, pooling their resources together allows these localities to pass worker protection laws and actually enforce them. It’s a really interesting and innovative thing.”

Gerstein said the creation of permanent local offices of labor standards is a new frontier for municipalities, something that didn’t exist before because, by and large, it didn’t need to. But times have changed, and cities, counties and municipal districts are reacting.

By all accounts, they will have to continue to do so. What happened in Los Angeles last month, analysts say, is likely to become more the norm than the exception. “It starts with us,” de León said. When it comes to worker protection, that is a paradigm shift to be reckoned with.

Be the first to comment on "In the face of federal inaction, local governments tackle labor issues"