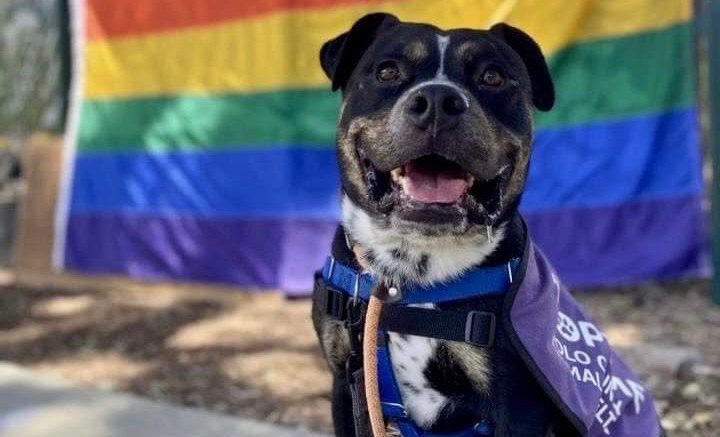 Gumbo, looking for an owner, at the Davis Pride celebration.

He has a mile-wide dog smile and constant urge to play or cuddle. His name is Gumbo, and he’s a spunky bully breed-mix who is currently waiting for a home at the Yolo County Animal Shelter.  Based on reports, Gumbo wants what we all want – affection, stability, companionship. In fact, he wants it so badly that he’s been getting depressed inside his kennel, according to staff, enough so that they’re getting concerned about him. Gumbo couldn’t have known it, but a field trip with a volunteer, and a social media push from the region’s army of dog-lovers, unexpectedly thrust his plight – and his shining grin – into the middle of a much bigger question about common bonds and community. The question is: Who are we in 2022?

Based on what the shelter has said, Gumbo, who’s estimated to be around four, almost certainly had a human family until recently. He knows how to sit on command, as well as lay down and be extremely well-behaved in bustling social settings. That includes under tables at restaurants and cafes. The shelter has video of him happily taking a car ride, letting children pet him and eagerly playing with toys inside a pet store. But the caretakers have also noticed that the isolation he finds himself in is taking a pronounced toll on an otherwise happy dog.

“Gumbo began to deteriorate in the shelter environment, exhibiting behaviors like endless spinning in his kennel and dog reactivity,” the shelter posted on Istagram. “So, a volunteer took him out for a day foster trip to give him a break from shelter life and to better learn what kind of amazing dog Gumbo really is. Gumbo is a love bug who wants his big blockhead and belly scratched endlessly … This friendly boy wanted to say ‘hi’ to all of the dogs he met, and while some were intimidated by his big head, he was gentle and not too pushy. Even the busy crowds for Davis Pride didn’t faze this chill boy.”

Much of these observations came from shelter volunteer Eunah Cho, who had Gumbo for the afternoon and took some flattering photographs of him, to boot. Not only did the Yolo shelter use those images, but so too did NorCal Bully Breed Rescue, which posted them to its popular Facebook page to signal-boost the four-legged orphan’s ordeal.

“His Instagram reel reached so many people, but to this day, he is still waiting for someone to adopt him,” NorCal Bully Breed wrote. “If you’re looking for a cuddly meatball, Gumbo is the one for you. Help spread the word so we can find him a forever home!”

That’s when the trouble started.

One of Gumbo’s portraits was of him posing, model-style, in front of a rainbow flag at Davis Pride. He was flashing a huge grin across his face. Nearly 150 people liked the post; but one person absolutely did not like it. That man left what to many would be an offensive comment, and then went on to direct-message the page administrators using hateful, anti-gay slurs. NorCal Bully Breed screen-shot his profile and his messages, and it then made this new post:

“We’ve seen all sorts of silly comments on our page over the years. All sorts of nasty messages. And all sorts of bullying over differing political beliefs.  We try not to engage most of the time … We will not tolerate racism of any kind … And we will not tolerate homophobia in any form. Evidently a photo of a dog in front of a rainbow flag triggered [*the culprit] here to the point of needing to be repulsive on a post about a dog in need … Listen, if a photo like that bothers you, you’re DEFINITELY following the wrong rescue.”

Soon, Eunah Cho also weighed in, writing, “I’m the one who took this photo of Gumbo when we visited the Pride celebration in Davis and everything about this memory with this sweet dog is precious to me. Thank you so much for calling out [the offender’s] homophobia and bigotry — shame on him.”

Numerous fans of NorCal Bully Breed Rescue were quick to leave comments about where they stood.

“What a sad human being,” one wrote.

“This is not someone I would trust to care for an animal,” another observed.

Summing the matter up quite succinctly, one declared, “What an effing douche canoe!”

But the comment SN&R would draw readers’ attention to is this one: “Everyone – let the homophobe rot and go adopt Gumbo!”

The point being that the innocence of a highly affectionate, currently ownerless dog who had his best day in a long, long time at Davis Pride – simply because of the steady interactions and warm connectedness that was surrounding him there – might be a perfect symbol of where many of us want to go moving forward: In other words, we want to arrive at a place where our genuine support of one another, and our instinctive hope to see our neighbors flourish, are what always win the day in our society.

At first glance, it might seem like a kind of poetic justice if someone from the LGBTQ community were to drive to Woodland today and adopt Gumbo. But the truth is, if one believes in the actual concept of community, then they know everyone has some stake in the bright colorful flag that Gumbo was photographed in front of; and any loving person who believes in the bedrock of community adopting this broken-hearted pet would be a big win not just for him, but a win against the ugliness that we will put behind us.

Be the first to comment on "Editorial: The Gumbo of a community’s heart – can a dog’s quest for love beat a reminder of hate?"