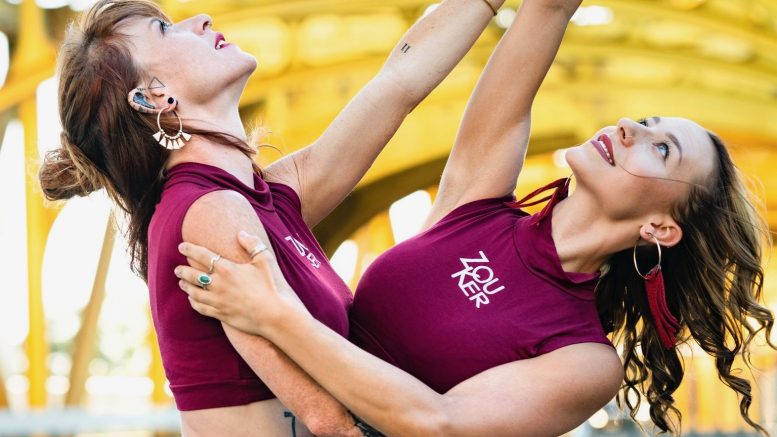 Ruby Fuse and Ashe Jordan, founders and owners of a dance school out to change peoples' lives. Courtesy photo

In a world that keeps losing real bonds and touch, two dancers are re-introducing the magic with adaptable traditions from South America

It didn’t matter what they wore, as long as it allowed for movement – and move, they did.

It was 1992 in Boca da Barra, Bahia, Brazil: The floor was packed with a variety of dancers. Some hesitant and stilted, some vibrant and fluid. Twirling at the center was a couple caught in a tornado of movement known as the lambada. Touching bodies, a hand on her back, foreheads kissing, or, for a brief moment, a break in contact.

The movement between the pair never ceased. They seemed to simultaneously ignore and absorb the presence of their gyrating compatriots.

In another hemisphere, another coast and several decades later, the kinetic grandbaby of the lambada — the forbidden dance of the bordellos of Brazil — thrives in Sacramento under a new name: ZoukVida.

The dance, which is celebrated, edified and savored by co-owners Ruby Fuse and Ashe Jordan, is a variation of Brazilian Zouk with roots in the lambada.

ZoukVida, the Brazilian Zouk Dance School, has two homebase studios, one in Grass Valley and another in Sacramento, with an additional shared space at Move! Studios. Fuse and Jordan run 11 classes a week, teaching more than 60 students. Fuse has been showing locals Brazilian Zouk in Sacramento for a decade, adding Jordan as a partner in the business about a year ago.

Presently, the Sacramento classes are split between Move! and the Brazilian Center For Cultural Exchange of Sacramento, an annex of the Sacramento Ballet’s Clara auditorium.

“Our dance needs a little wider space range, so we moved,” Fuse said of a shift from Firehouse 5 to Clara’s block of dance studios. “I trained [Ashe] as a student-teacher first; we now have five. I’m ready to start to marry other things in my life.”

Though she’s been engaged in a partnership with Fuse at ZoukVida for over a year, Jordan’s history with Brazilian Zouk dates back to 2017, when she had a chance encounter at a partner-dance conference in Marysville. The night, which was Jordan’s birthday, began with her enjoying an exchange with a stranger, but ended with what seemed like a shared enchantment of the space around them.

“There’s one specific person who I’d never met before in my life, who asked me to dance and he said, ‘I want to try Brazilian Zouk,’ so I was following,” Jordan began. “And all of a sudden, late at night — it’s like two in the morning — rain starts to come. For me, that was a universal message, and we were just dancing there in the rain in the middle of this beautiful partner-dance hippy convention and that changed my life forever.”

A few years later, Jordan began to study under Fuse’s guidance. Fuse fondly refers to Jordan as “her twin,” given that the two sync so well in both dance and business — as well as measuring in at roughly the same height. Fuse recalled that, when she first paired up with Jordan to play with Brazilian Zouk, the two were at the South Yuba Club in Grass Valley.

“I’m like, ‘Listen, I love Zouk. I want to dance with you,” Fuse said, picking up a classic country tune in the midst of her telling. “You can dance Zouk to anything … so I put on ‘I got friends in low places.’ At that point, we were laughing, ‘Who the eff are you? Who the eff are you?’ And then we just kept answering the call.”

The classes Fuse and Jordan share cover several levels of Brazilian Zouk, based on the students’ comfortability and knowledge of the exchange they share with their partners. Fuse mentioned the value in learning what she called the difference between sexual intimacy and intimacy. She lamented that, in a world where connection is lacking, people are “in a relationship with their phone,” but finds peace knowing that she can guide her students back to a place of human sharing.

“This is not about Zouk, this is a pathway to manifest,” Fuse said. “The roots are being cut, but it’s important for us to remember that we’re part of a bigger human movement, because these things — just like music and the army — we’re moving. For us to have a year of that and to have the same direction and trajectory — we’ve grown three times our size since last June.”

The way Brazilian Zouk Dance School has grown might be attributed to its open arms and open doors for those from all walks of life. Fuse described ZoukVida as “very much non-binary” because the partnership between two dancers requires a familiarity with both leading and following. That exchange can happen between two people of any gender.

Fuse said that, when COVID-19 forced closures of businesses, gyms and restaurants, she chose not to take a stance on one side or the other. From her perspective, the strength of the school comes from her realizing that she can’t make all of the decisions on her own, but that ZoukVida can only grow by listening to her partners; namely the teachers and students she works so intimately with.

“We give out three-minute hugs,” she said. “We just waited and let our community come together when they felt ready for that. People had come to a sovereign community, but we talk sovereign underground. We didn’t respond to challenges through challenges. And we kind of all just trusted each other to get through that and we can all honestly say we did not have a COVID outbreak during COVID in this school.

“We plan to handle any epidemic or pandemic that way,” Fuse continued. “If all of a sudden, stuff starts to fall apart, our doors will be open through everything that the world [goes through].”

Jordan finds it comforting that, even though Zouk dancing requires close touch in practice — a connection diminished when partners are asked to stay six-feet apart — Brazilian Zouk has gained in strength more than before the pandemic.

“I’m seeing Brazilian Zouk pop up now in so many different countries, hundreds of countries,” Jordan noted. “Zouk is like one of the fastest growing partner dances I think in the world.’”

Fuse and Jordan regularly host guest-instructors at their studio spaces — well-experienced teachers of Brazilian Zouk or Lambada from all over the world. For many of their students, having exposure to such masters of the craft is the defining element to help them advance in skill and technique.

“For us to be able to afford to bring our master teachers here, it’s the only way a lot of our students are going to train with masters,” Fuse said. “We brought a teacher in from Brazil that we had not seen since 2017. They got here and we were able to just dance and that could have been the second time I danced with that human and outside looking in, you think we trained for Dancing with the Stars.”

Fuse and Jordan have a goal of growing ZoukVida in scope and size, accomplished by sending Jordan on trips to compete at Zouk events. Her success outside of the local community gives their homebase an increase in strength and clout, with Jordan as the street team. Fuse dubbed her, “a prodigy,” adding that their kinship and alliance gives the business a fierce amount of strength and direction.

“She’s on a different course in her learning and development,” Fuse said. “It’s really hard to find that in a partnership and to also be two females. We don’t have a guy leading; we both learned how to lead and follow this dance, so we can do it. It just allows us the freedom to be more diverse.”