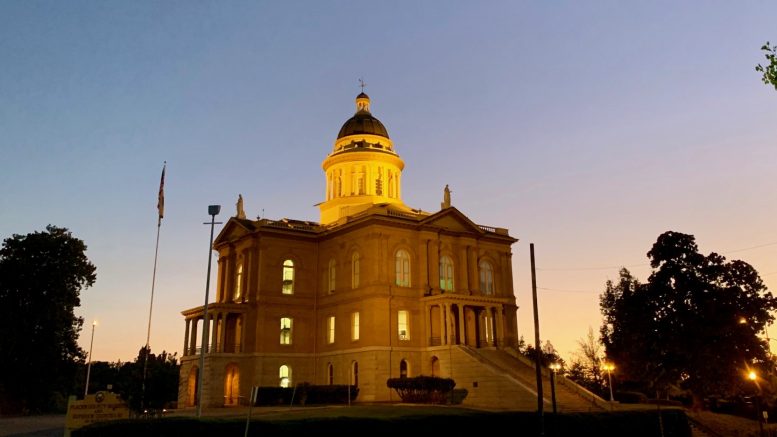 With 94% of the June 7 primary vote counted, Rebecca Chenoweth is currently in first place in California Assembly District 5 which straddles Placer and El Dorado counties. This means the Roseville Democrat moves onto the Nov. 8 runoff against Republican Joe Patterson, who enjoys frontrunner status given the GOP’s 10-point voter registration advantage: GOP 41% to Dems 31%, but with a large 28% chunk registered as independent.

This is Chenoweth’s second run for office. A lawyer by profession, she ran unsuccessfully in 2018 for superior court judge. However, expecting greater scrutiny in the runoff, her team recently contacted SactoPolitico.com to discuss a past issue involving her husband, Scott Vogelsang. Years before they met, he was convicted of healthcare fraud involving his former medical equipment company. He served three years in prison but has long maintained his innocence and remains hopeful the conviction will be expunged.

SactoPolitico reviewed the conviction, but like most things involving healthcare billing, his is a complex case. We present this Q&A – including information from Vogelsang – to let Placer and El Dorado county voters evaluate themselves. Joe Patterson’s campaign was contacted for comment, but chose not to provide any on the record.

Question: The primary vote is slow to finalize, but you and Joe Patterson are guaranteed to advance to the November runoff. What is your assessment of these primary results so far?

Rebecca Chenoweth: So far, so good. I didn’t think I would be ahead. I was hoping to be in the Top 2, and I was pretty sure Patterson would be the other runoff candidate because he has the most name recognition, at least in Placer County.

Still, the turnout was pitiful. I am hoping more people vote in the general. I am also expecting to have to work twice as hard because I am outnumbered by the Republican Party voters, but there is a 20% no party preference segment in the district [plus 8% third party]. I am hoping to persuade at least some of those to my way of thinking, or maybe they are already like-minded people. But I definitely have to reach out to them and not just Democrats.

Question: Because you faced no Democratic opponent, no one brought up your husband’s past prison history. Now that you’ve made the Top Two runoff, that may change. What is your main message to voters about this issue?

Chenoweth: All I can say is wonderful things about my husband. Obviously, I am biased, but we were in the very early dating stages when I found out about this thing that happened to him. He is a wonderful man who works very hard to help people, and both he and I believe he was unfairly convicted.

I’ve spent my legal career helping people. I started out representing children who were the subject of custody disputes or adoptions or probate guardianship or child abuse cares. Then I represented Child Protective Services. I represented the public guardians so I practiced elder and child abuse law. I currently work for a nonprofit that provides services to victims of domestic violence, sexual assault and human trafficking. He and I are both the kind of people that help other people in need. I admire him for that. I respect him for that, and I fell in love with him for that.

Note: The complex case against Vogelsang centered on double billing of Medicare and the California Medicaid system known as Medi-Cal. The latter only reimburses for remaining amounts after primary insurance providers such as Medicare determine what they will reimburse. Federal prosecutors claimed Vogelsang would deliberately submit to Medicare incorrect claims for medical equipment reimbursement expecting Medicare to reject them. With none reimbursed by Medicare, Medi-Cal would then reimburse 100 percent of the claimed value. They said Vogelsang would then submit a corrected claim to Medicare and collect another 80 percent of the equipment’s value.

Vogelsang does not dispute that the narrow submission windows required vendors to submit Medi-Cal claims before Medicare may have ruled on the same costs. But this was a required flaw in the system, which he had been trying to get fixed. But Vogelsang disputes any of his Medicare submissions were ever “rejected” or submitted with an intent for them to be denied. He believes an audit of his financials conducted by Medi-Cal shows he did not benefit in the amounts the government claimed; however, the judge would not allow the submission of any financial audits until post-trial to avoid confusing the jury.

But following his conviction, “the judge reversed himself and took that audit option away,” Vogelsang said. “So my conviction relied completely on an interpretation of a double billing law, and nobody from my side knew at the time where this law came from. We couldn’t find it, and recently we learned that it was challenged in court as soon as it first appeared and was later repealed. That’s why I am hopeful my conviction might eventually be overturned.”

Question: Your husband was convicted of Medicare misbilling. This is a major issue with an estimated $60 billion a year lost to fraud, errors, and abuse. Do you agree that questions about a spouse convicted of healthcare fraud would be a fair issue in a political race, correct?

Chenoweth: Yes, I understand that, but I also hope voters understand that what initiated interest in Scott’s case was a basically a whistleblower article he published in a trade publication. It exposed what was going on in his industry and how it was costing taxpayers’ money. Right after that was when he started to be investigated.

My main message to voters is healthcare run by the government is messed up and, in plain language, needs to be straightened out. My husband’s case is a very good demonstration of this. Part of the reason healthcare is so expensive is because the two systems – Medicare and Medi-Cal – aren’t talking because there cannot be coordination of benefits. This creates a very complex system and unfair third-party responsibility like Scott’s case.

Question: Some voters may wonder why you didn’t get this out before the primary. What is your response?

Chenoweth: I don’t know why. I have just been so busy running for office and working full time. I also expected Scott’s situation to eventually be raised. When that didn’t happen, I decided to reach out to a credible reporter and share the story myself.

Chenoweth: I met him in August of 2010 on a blind date at Fat’s Asia Bistro in Folsom. This was three years after his time in prison, not that I knew about that at that time. We met for a glass of wine. I was late, and I called to say I was late. He thought I had canceled on him, but we ended up closing the place down. [laughs] We married seven years later in October of 2017.

Question: How long after this did you learn about your husband’s prison time, and how did you respond? Did it take time to process?

Chenoweth: My husband had drafted a petition to be filed with the appellate court, and right after our third date, he gave me a copy of it. He told me later he was afraid that he would never hear from me again, but he said he had to let me know. I read it and called him right away: “This happened to you? This is awful.” He was very forthcoming right away.

The brief wasn’t confusing, at least for me since I am a lawyer and use to reading those types of documents. It was pretty straightforward, and we talked about it so I gained more understanding of the process. It became clear to me he was doing what he was supposed to do and still he was prosecuted for that. In fact, recently there has been a clarification in the law – not a change, but a clarification – that we believe if it existed previously would have prevented his conviction. This is why he is hoping will get his conviction overturned.

Question: Beyond this, what are the key issues you are running on?

In terms of healthcare, I would have voted for CalCare [AB 1400]. This was the California single-payer plan, which my party withdrew without a vote in January. I want to find out what went wrong there. Do people in the Assembly get funding from healthcare providers? Why did it get pulled when it seemed to have the support? So I want to find out.

Question: In terms of the high cost of housing everywhere in the state, what approaches do you favor that would especially help working and lower class residents in Placer and El Dorado counties?

Chenoweth: I want to expand first-time home buyer benefits to people, building more affordable housing, and assistance with rent for people who are literally one paycheck away from being homeless. A lot of people who live paycheck to paycheck, if their car breaks down that is enough to send them into a spiral.

Chenoweth: I am not a career politician. I listen more than I talk, and I will listen to my constituents. I also don’t owe anyone any favors and will represent my constituents’ best interests. What means most to them. This includes taking no corporate money. I have taken a pledge to take no oil or gas money.