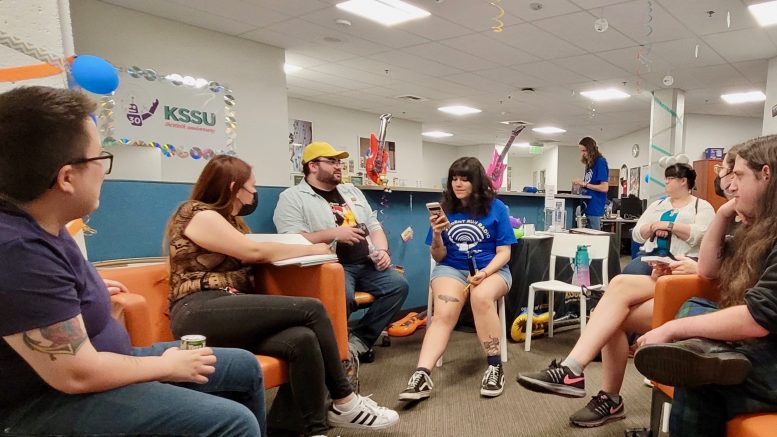 The wood framed door clicks, locking as I enter the KSSU studio for the first time.

To my left, hundreds of stickers cover a portion of the wall. Now an unidentifiable canvas like a NASCAR Russian doll, the mounted cork board is just layered with logos: Festivals, album covers and band names from local and traveling acts — the Hieroglyphics, System of a Down, Muse, Mr. P. Chill, Nas, Subhumans and Fleet Foxes — they’ve all reportedly visited this studio.

It was Thursday, March 10 at 4:55 p.m., moments before the premier of my weekly radio show Upper Case E.

With the training from then-station manager Odin Rasco and student services coordinator Aaron Wall under wraps, the sound equipment wasn’t wholly alien to me. My guest — Sacramento hip hop artist and animator Max Bundles — was a pro and showed up early. Once my levels were adjusted and my playlist loaded into the system, I flipped the “ON AIR” switch, signaling to those passing the studio window at Sacramento State’s University Union that I was about to start.

For over 30 years, KSSU — California University, Sacramento’s student-run station — has been a sandbox for its DJs and hosts, a group consisting of current students and members of the community. Each semester, a fluctuating roster of DJs mount their own one-hour, weekly radio show and take part in operating a college radio station. The station’s been a medium that gives a creative space to enthusiastic audiophiles and would-be hosts since 1991.

When the station’s first show aired — co-hosted by Jim Bolt and Chris Prosio — its pilot episode broadcast from the KEDG 530 AM, simultaneously fed to KCBL 88.7 studios. When the on-air light brightened for the first time that year on Sept 10, Bolt’s was the first voice to make its way across the airwaves.

“Berlin with you: 2:03 on KCBL 88.7. This is Jim Bolt. I am awaiting the arrival of Chris Prosio and today, we’re bringing you the Modern Heritage Show,” Bolt said before introducing the next set of songs. “Chris Prosio came in, and now I’m a complete set.”

“We’re bookends!” exclaimed Prosio as the two co-hosts launched into the meat of their debut.

Three decades after the university’s station aired its pilot episode, Prosio and Bolt, as well as a bevy of Sac State alumni and former KSSU DJs — some of which returned to host a throwback episode of their original shows — convened to celebrate the landmark accomplishment.

The day’s celebration included a photo booth and craft table, a panel exploring the history of the station, and a closing ceremony where KSSU allies and former DJs could finish the night mingling and sharing anecdotes.

“It’s everything we hoped it would become,” Bolt said, surrounded by a group of current volunteer DJs. “We had two rooms in the library, and egg crate foam, and that was hot. We’d open the doors to try to cool it off, and the librarians would come out and shush us, ‘This is a library!’ but this is a radio station.”

Bolt added that, though the station’s call letters began as KEDG, “because it was the 90s and everything had to be edgy,” that designation soon had to be switched to the current call letters, KSSU, due to an unfortunate encounter with another radio station.

“The reason we changed the call letters was because one of the founders tried to get a job with a station in Nevada,” Bolt relayed to the group of wrapt DJs. “Rather than offering him a job, they sent him a cease-and-desist letter demanding that he stop using their call letters. Legally, they could have still used it because the FCC rules are a little different.”

As station manager, on the day of the anniversary celebration, Rasco spent all morning being interviewed by local news crews before finding time to connect with Prosio between events. He professed that, though he was full of anxiety and had been at the station for several hours more than he would be, he was enjoying watching the various generations of KSSU personalities vibing throughout the day.

Observing a conversation between Rasco, Prosio and coordinator Wall, I witnessed the discovery of a motto for KSSU that the station would be foolish not to convert into some hot merch.

“This is a very fun day,” Rasco observed. “It’s kinda cool to actually meet the disparate elements of the station. Also, just sitting here, I realize that 30 is incredible and think, ‘Man! It survived my tenure.’”

Prosio acknowledged that the station surviving a manager’s tenure is generally the goal.

“Yeah. I’m just sitting here thinking, ‘Alright. My mismanagement is less than the inherent quality of the station,” Rasco said.

After a moment’s pause, Prosio seemed to have an epiphany.

Until that moment, Wall had played the quiet observer, but voiced his disappointment in not having thought of this notion when planning the celebration.

“Where was that six months ago?” Wall asked. “I could have totally used that as a tagline for this anniversary”

Rasco seemed uncharacteristically upbeat when he allowed himself a moment to reflect on the other examples of community-building that occurred that day.

“Even though we’re from different decades, and like separated by years, age, majors and all these things, we’re connected by this shared appreciation and passion for college radio,” he noted.

According to Prosio, the station’s initial reach was modest, allowing only people on campus to pick up the signal, as well as reaching some lucky listeners in the campus’s parking lots. Going from a simultaneous broadcast on radio and local cable access in 1991, to a switch to online programming in 2005 at www.KSSU.com, the station’s hosts now have a reach beyond the dorms and parking lot of the university. It includes listeners from around the globe.

Prosio also said that early feedback from influential administrators on campus was apathetic, at best, in response to proposals to establish a station at the university. He admitted that there were concerns that first and second-year students might not be paying attention to the station enough to take advantage of the opportunity to run it in following semesters.

“When we approached the adults in the room about doing this, the biggest, loudest comment we always got was, ‘This will die out when you guys leave,’” Prosio remembered. “At the time, we were all juniors, seniors. They just assumed they could shine us on for a couple of years and it’ll go away. Also, what freshman is going to hear this and decide they want to take this on. Who wants to be the next station director?”

But the station chugged along, remaining a vital part of Sac State and winning several awards over the years, including an MTV Woodie Award in 2008 and, in the following year, Best Use of Limited Resources by CMJ.

At a panel that saw Bolt and Prosio walking the crowd through the timeline of the creation of the station, the two were joined by former station director Quin Imeson, as well as the panel host, Rasco. As the talk began to wind down, Imeson waxed on about the importance of the station to the people that engage with it on any level.

“Just being able to say, ‘Hey, I am gonna have a creative show that you can listen to one hour that week and find out what I enjoy,’” Imeson began, “whether that’s music or news, any hobby, that I’ve suddenly picked up this semester. Just having that place and that community; I think, why people keep coming.”

Aside from the few shows I decided to host solo, KSSU has not only allowed me an opportunity to mingle with musicians and artists I might not otherwise be able to fit into my regular work for readers of Sacramento News & Review, it’s been a chance for me to fulfill the wish that I’ve had since I was 12 when young curly haired me uttered aloud to a friend at Bear River Middle School in 1994 — about a decade before the digital age of media, “I want to be a DJ.”