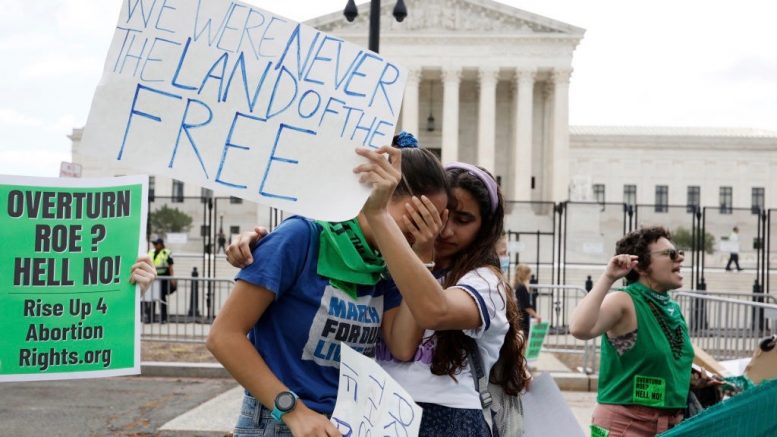 As Roe v. Wade falls, a new podcast immerses listeners in the harrowing experiences of those seeking abortion, and the network of doctors, nurses and clergy helping them.

Caruso, head of U.S. Content at the nonprofit Population Media Center, wanted to get beyond the politics of abortion to the gripping human reality facing millions of people in parts of the country that had already restricted reproductive rights.

The result is “Crossing the Line,” a 10-part audio documentary series that will premiere on July 6, with new episodes every two weeks. (A trailer is available here; more information on the podcast can be found here.)

“Crossing the Line” features the stories not only of people trying to terminate a pregnancy but of the growing network of professionals and volunteers committed to helping them. From doctors and nurses to family members and faith leaders, these providers and advocates are now on the front lines of an explosive battle that poses significant legal and personal risks.

Capital & Main spoke to Caruso, who was raised Catholic, hours after the Supreme Court ruling on Roe. The interview has been edited for length and clarity.

Capital & Main: What makes this podcast different from others on abortion?

Lisa Caruso: We are not breaking ground in terms of sharing stories, but what we want to do is take people to the front lines as it’s unfolding so they can experience it firsthand.

It’s not just a podcast about abortion — it’s about human rights, about family,

about individual freedoms and how we protect inalienable rights in America.

Do you want the justices who voted to overturn Roe to listen to the podcast, and what do you want them to take away from it?

Yes, I would like everyone to listen to the podcast. Like anyone else who is listening, I hope it opens their hearts and minds to the real-life impacts of their decision today.

You started making this podcast last year, long before today’s decision overturning Roe. How hard has it been for women to get an abortion even without the outlawing of Roe?

This ban is another notch in the already difficult barriers to access that have been erected for individuals seeking abortion services. It unevenly affects women of color, immigrants and those with geographic barriers.

What are the dangers faced by people seeking abortion and those who help them?

In Tennessee, there is only one clinic in Knoxville remaining because Planned Parenthood was burned down. In Michigan, those seeking abortion must have security and escorts because there are armed protesters every day. In Texas, anyone who helps someone who wants to have an abortion is considered an accomplice to murder.

Can you share a story of a woman seeking an abortion and the people helping her?

Our premiere episode is focused on a travel program in Dallas. It’s in conjunction with a religious coalition who believes that it’s their responsibility to help individuals seeking these services because their God does not condemn individuals in this situation. We take a journey with a young mother who wants to focus on getting her life on track and already has a young toddler. She knows the choice that is right for her is to not continue the pregnancy.

It may surprise people that clergy are helping people access abortion. Why are faith leaders involved in this movement?

They see their calling to be supporting individuals who need help without judgment. A reverend we are working with has indicated that he has had anti-abortion protesters come to him seeking abortion through this program and then go back out to protest. I don’t know if I was surprised as much as I was pleased to learn that it isn’t as black and white as we might think; it isn’t red vs. blue.

It is an incredible testament to those who work in this space on a day-to-day basis. They have been committed to it for years: the individuals who founded a clinic in Texas in 1973 right after Roe passed. A doctor in Knoxville who is following in the footsteps of his father who ran a clinic. A doctor in Texas who grew up undocumented and saw people oppressed and marginalized and wanted to take up the fight. They all have their individual motivation.

This podcast must be logistically very difficult. How are you actually pulling it off?

Initially we thought we could send out audio packs to those in the movement and on the ground. Logistically it became very difficult. It took getting a trusted network of reporters and documentarians in these key states and building that trust one on one, so they could understand what we are trying to do and that this would be a historical documentation in real time.

Are you hoping to reach beyond pro-choice Americans with this show and challenge those who support banning abortion?

I hope this podcast reaches as far and wide as possible and lets those who listen make their own decision. We wanted to not just speak in an echo chamber. I thought that using these immersive stories could hopefully illuminate for those on the edges what the realities are. They might not have known before because it’s all been politicized. We want to be able to present factually but also with an opportunity for conversation.

What have you learned about our country, and how banning abortions will affect the nation?

Nothing is more shocking than the wording in the decision that came down today that basically says the erosion of rights is just the beginning. They will be looking at other precedents and considering whether they need to be examined — gay marriage, birth control. If this starts to be the norm, that we are reconsidering things that have been the law, I am not sure where we are going.