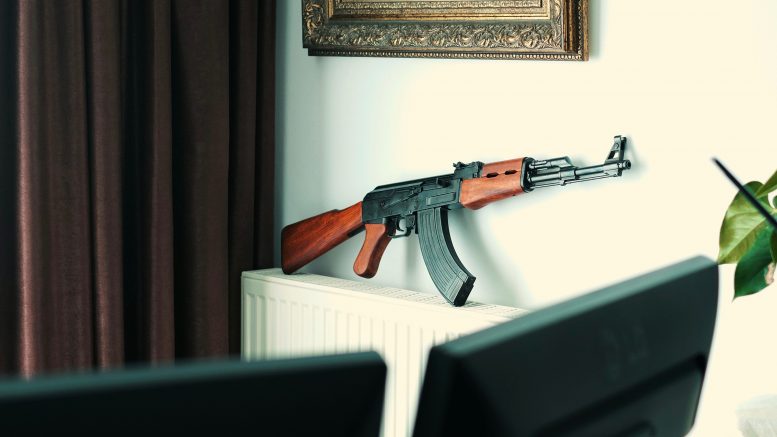 The AK-47 is a rifle that is obtainable, legally and illegally, in Nevada. Photo by Marc Schaefer

Alleged conspiracy had meth flowing to Tahoe through the Capital City, guns flowing there from the capitol of the Silver State

Five years ago, the Bureau of Alcohol, Tobacco and Firearms raised alarm bells that two-thirds of guns used in California crimes were coming from Nevada or Arizona. That trend saw a terrible punctuation mark in 2019, after it was revealed that the 19-year-old mass-shooter at the Gilroy Garlic Festival had obtained his AK-47-style rifle from just over the Golden State’s border. Last week, federal authorities brought charges against six individuals accused of operating a ring that trafficked “ghost guns,” assault weapons and pounds and pounds of methamphetamine from Nevada into South Lake Tahoe and scores of locations in Sacramento County.

The suspects were netted in a multi-state, multi-agency effort that the FBI has dubbed “Operational Bear Trap.”

The months-long investigation started in August of 2020 when an informant for law enforcement allegedly identified Robert “Bobby” Choate as someone who was selling large amounts of meth around South Lake Tahoe. According to an affidavit filed by Special Agent Preston Patton, a Tahoe-area member of the FBI, several undercover buys soon led authorities to a location in Carson City, Nevada. There, Choate reportedly introduced the informant to an unknown man who was selling AK-47s to California residents, as well as supplies of heroin.

“During this conversation, the male said that he could also get fully automatic AR-15 rifles with no serial numbers for sale,” Preston wrote in a court filing, “but added that he did not like bringing guns into California because of California’s assault weapon laws.”

Preston also noted that, later, Choate told the FBI’s informant that he could have another gun delivered to South Lake Tahoe from Nevada.

Federal agents, South Lake Tahoe Police and the El Dorado County Sheriff’s Office continued their undercover purchases of guns, meth and heroin throughout 2020 and 2021, including at the Hard Rock Hotel in Stateline. One of the individuals selling guns and pounds of meth, according to Preston’s report, was 33-year-old Fabian Gomez, who, in conversation, referred to meth as “vanilla,” heroin as “chocolate” and guns as “toys.”

The FBI began investigating Sacramento’s role in the trafficking network. Court filings indicate that led them to William Owen, a man “associated” with a jet ski rental business in Rio Linda (i.e., agents allegedly saw that Owen had keys to the business and would often come and go from it, while one of his partners reportedly referred to it as Owen’s “shop.”).

Owen is accused working with a woman to sell large quantities of meth at Sacramento’s Home Depot on Howe Avenue, as well as a gas station in Citrus Heights and other locations in the county.

Owen, Gomez, Choate were all arrested, along with Sarah Anderson, Epifanio Ramirez and Joaleen Rogers. They face a host of charges in federal court in Sacramento.

The black-market gun connection between California and Nevada isn’t the only source of political tension between leaders in the respective statehouses. California’s last mass-shooting prior to the pandemic, when three people were murdered and 17 were injured at the Gilroy Garlic Festival, highlighted another grim regulatory reality. According to Gilroy police, the teenage shooter in that incident had legally bought his AK-47 style assault weapon from Big Mike’s Guns and Ammo in Fallon, Nevada. The shooter was a graduate of Gilroy High School and wouldn’t have been permitted to buy a gun in California because he wasn’t 21. As fate would have it, he’d been living in Mineral County, Nevada, during the months that lead up to his rampage. In stark contrast to the recent inaction of police officers in Uvalde, Texas, who stood idly by for an hour as 19 children were slaughtered, Gilroy law enforcement confronted the killer at the festival within a minute of the first rounds letting loose, shooting him several times and probably keeping the casualty count from being higher. Nonetheless, the tragedy ended with the death of 25-year-old Trevor Irby, 13-year-old Keyla Salazar and 6-year-old Stephen Romero.