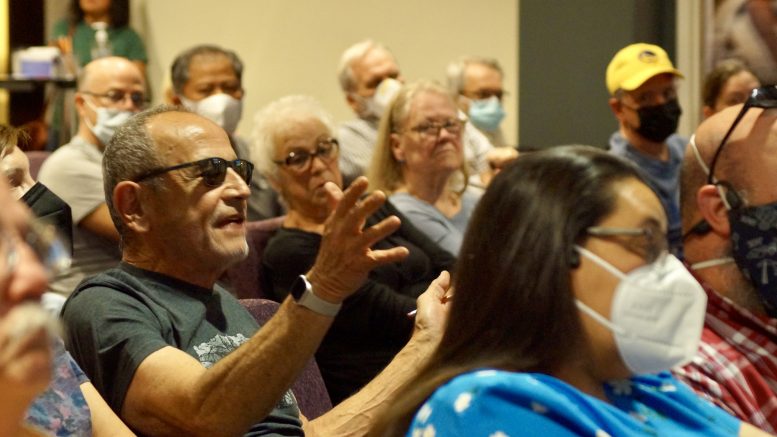 Savala’s organization has made housing a priority for economic development and believes the proposed project at 440 Arden Way will help stimulate the local area. This project, he said, will add an estimated $3.5 million in revenue to Del Paso Boulevard businesses.

“That money goes back into the community,” Savala stressed during a community meeting May 31.

The use of this property also fits into a larger effort by the state of California to turn state-owned surplus land into affordable housing. In 2019, Gov. Gavin Newsom signed an executive order to make excess state land available for this purpose, noting how “nearly 50 percent of California’s households cannot afford the cost of housing in their local market.” The state has identified 92 properties in 28 counties as suitable for development for affordable housing.

The proposed development will include 124 one-to-three-bedroom units for residents that make 25-60% of the area median income. Thirty-one of those units will be reserved for formerly unhoused individuals and families.

BRIDGE Housing Corporation — a nonprofit headquartered in San Francisco that specializes in affordable housing development on the West Coast — is spear-heading the site, working in cooperation with the California Department of General Services. BRIDGE aims to break ground on the state-owned property in fall 2023 with construction lasting an estimated 20 months.

A crowd of roughly 60 people gathered for the community meeting, which was hosted by the Del Paso Boulevard Partnership and aimed at encouraging discourse between BRIDGE and residents who live near the site of the proposed project.

“We are committed to building affordable housing,” said BRIDGE Executive Vice President Brad Wiblin during the meeting. “We think it’s the No. 1 thing that can decrease homelessness and stabilize communities.”

But while BRIDGE and Savala’s group might be in full support of the project, many of those in attendance felt otherwise and expressed concerns about the development moving forward even as the Sacramento region grapples with its worsening housing affordability crisis.

During the meeting, tempers flared from residents of the nearby Woodlake neighborhood who vocalized concerns to BRIDGE representatives Wiblin and Director of Acquisition and Planning Jonathan Stern.

In addition to the building and management of 440 Arden Way, BRIDGE is collaborating with local entities to provide additional support to future residents. These organizations include Sacramento Housing and Redevelopment Agency, Child Action, Inc. and Lutheran Social Services.

During the question-and-answer phase of the meeting, Woodlake resident Elaine Jackson said she worries about overcrowded parking and questioned whether 73 parking spots would be enough for the 124-unit building. There will also be 40 bicycle stations.

In response, Stern stated the project is intended to be a transit-oriented community. Due to its proximity to the light rail, buses and bike routes, Stern added he’s confident the building won’t need a great deal of parking beyond what is provided.

According to Wiblin, the project’s parking holds up compared to what has been needed for other BRIDGE portfolio projects.

“We care about getting the parking right,” Wiblin said.

Jackson argued the public transportation system in Sacramento isn’t the same as it is in San Francisco — the location of 23 other BRIDGE housing communities — and she worried 440 Arden Way residents will be too restricted by public transportation, forcing them to rely on cars that will overcrowd the complex and surrounding community.

“You are underselling this to people,” she said. “The car situation is huge.”

“Our residents tend to be hardworking, play-by-the-rules type folks,” Wiblin said. “We take great pride in keeping our properties up.”

In response to the community concerns, Stern and Wiblin reassured those in attendance that nearby trees would be preserved and additional studies on noise and light pollution, as well as impacts of local traffic will be conducted and shared.

“I’m committing tonight that we will share the traffic study with you and deal with any issues accordingly,” Wiblin said.

BRIDGE isn’t yet done with the design process, Stern said, explaining, “hearing these concerns allow us to move to the next step in the process.”

Many in the audience commented that they would like to see the number of units in the building reduced to a lower density.

“If this was smaller scale, it would be so much better,” Jackson said. “We are asking you to scale it back so we can keep our quality of life.”

Jackson went on to point out that what BRIDGE is planning fits into one of four new housing developments near her community.

“There are four of these projects being developed in this area,” she noted. “We understand that they’re going to build things, but it’s about preserving our quality of life.”

“No one is against affordable housing,” said Woodlake resident Jeff Brooke. “How come there are so many concentrated in this area when there are places in North Sacramento with much more need?”

Savala later agreed it’s a fair question, but acknowledged that the Del Paso Boulevard area is ideal for vertical expansion due to an overabundance of vacant government buildings and proximity to the light rail.

Savala also pointed out that projects such as 440 Arden Way not only provide infill for state-mandated affordable housing, they also satisfy environmental impact standards put forth by the Sacramento Regional Blueprint, adopted by the Sacramento Area Council of Governments Board of Directors, in 2004, as well as Senate Bill 375 and Assembly Bill 32, both of which focus on reducing the state’s greenhouse gas emissions through, in part, smarter land-use planning.

As the meeting ended, Wiblin and Stern said BRIDGE is open to having future discussions with community members and is eager to work toward finding common ground.