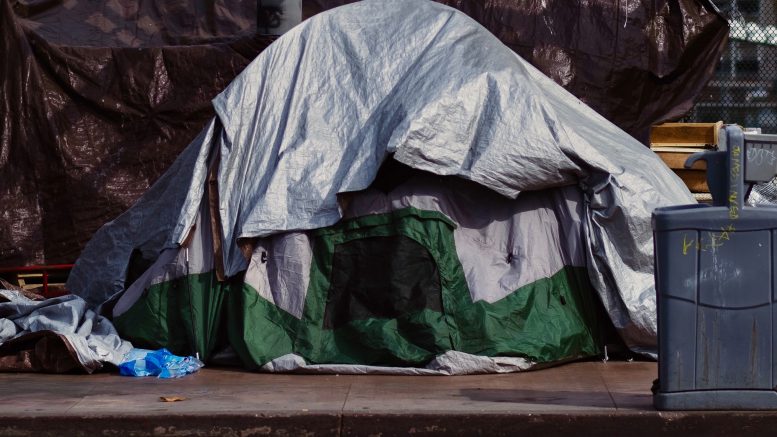 To unsheltered people caught in the displacement game, promises from city and county workers are plenty – deliveries, they say, are few

On a recent Tuesday evening, Josh Mateo, 31, stood on the corner of Howe Avenue and Fair Oaks Boulevard with his American Pitbull Terrier, Kalina, and watched as cars went passing by them.

He had not eaten yet.

Mateo was getting ready to call it a night and head back to his makeshift shelter, except this time he had to walk farther than usual. In mid-April, he and other unsheltered Sacramentans had been occupying an encampment on the corner of Howe Ave and Fair Oaks Blvd. The City of Sacramento has since forced the group to move.

“We were lied to and told that we had to leave under certain circumstances because they had to do construction work on the sewers.” Mateo recalled. “They ended up selling the property to somebody and put up a fence so that we couldn’t get back in.”

The site is inside Sacramento city limits but adjacent to unincorporated Sacramento County.  According to a statement made by Assistant City Manager Chris Conlin, the city of Sacramento entered a lease agreement with a local group interested in the property. The property was designated as a work zone and was vacated for safety reasons.

Conlin added that the city’s Department of Community Response and the County’s Department of Human Assistance have visited the site multiple times to offer services to the 30 people who used to live at the encampment.

“The county came one day right before the police made us leave: they said ‘We will try to help you get housing but we don’t know if we will be able to,’” Mateo remembered. “And they didn’t let us know that that (evacuation) was happening either.”

The fence that surrounded the property has been replaced by a metal gate. Mateo said he and others were threatened with police force if they didn’t leave.

“We didn’t get enough time to get our stuff,” Mateo explained. “They bulldozed our campsites and whoever didn’t get the chance to get their things, got them thrown away. They said they would use police force if we didn’t comply.”

Lisa is a 57-year-old woman who also used to live on the property before she was forced to relocate. She declined to give her last name.

“Imagine that every time you sit down, a cop tells you that you have to leave,” she said. “I’m old. This is not the retirement plan I picked.”

Lisa now roams the area during the daytime and returns to the corner of the intersection of Howe Ave and Fair Oaks at night. The encampment had trees that provide shade. Lisa now has nowhere to go during peak temperatures.

“Now it’s just a dream to have a home again,” she noted. “I just realized recently that it’s never going to happen and I’m going to die out here.”

Aileen Mestas, 22, has been a Sacramento resident for the past year and resides in an apartment complex near the property where the encampment was.

“My main concern is that they don’t have a place to stay anymore.” Mestas said. “I feel like the county isn’t doing enough. The least they could do is find them a stable place to live.”

It is unknown where many of those living in the encampment went after they were forced to leave.

A Sacramento City spokesman declined to comment, referring to the statement from Conlin posted online.

“Not too many of us are getting housing,” Mateo countered. “Some went to the river and other people dispersed into the community.”

Mateo added that he was lucky to get a Homeless Outreach Navigator from the county.

“The heat has been pretty bad: We got a navigator who is working on getting me and Kalina inside,” he acknowledged. “I don’t like her being outside when it’s hot. It’s somebody from the county; they put people into these houses. Three to four homeless people per house and everyone gets their own room.”

As of mid-May, Mateo said he had yet to hear from his navigator about housing. He said he and many others still do not have housing or access to services they were promised before they were forced to move.

TOPICS:displacement from homeless camps in Sacramento

9 Comments on "The story of an encampment: What happens to those on Sacramento’s streets after they’re forced to move"