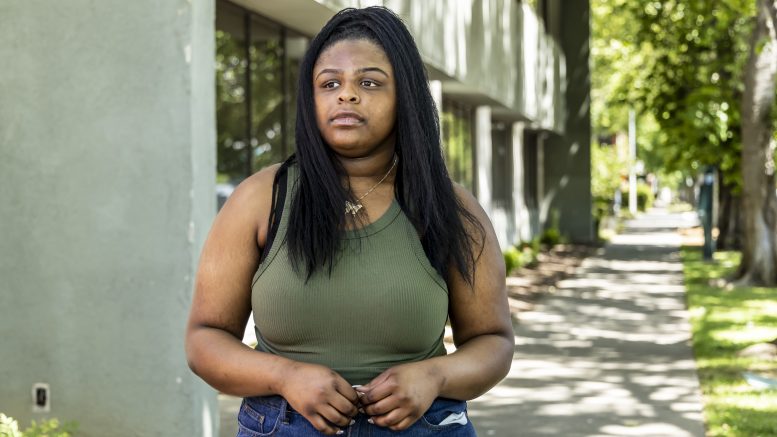 Amajhalay Williams, 20, lived in 21 foster homes and about five group homes as a foster child. Now she lives in downtown Sacramento and often spends time at the nonprofit Youth Wind Services. Photograph by Joan Cusick

When Amajhalay Williams entered foster care at 5 years old, she left behind what she describes as an abusive mother who struggled with substance abuse.

“She was there physically, but she wasn’t there mentally,” says Williams, now 20. “Her abusiveness got not one kid, but four different kids taken away. She just wasn’t in the right head. She just wasn’t a fit parent unfortunately, and me being firstborn, I just happened to get it the worst.”

But foster care also meant more instability for Williams, who lived in 21 foster homes and about five group homes during her youth.

Now Williams, who is Dominican American, lives at a hotel that has been converted into apartment housing in downtown Sacramento. The apartment owner receives funding through the Low-Income Housing Tax Credit program, which is administered by the Internal Revenue Service. As a result, the building is required to set aside some units for lower-income households, which means those earning less than 50 or 60 percent of the area median income.

California has more than 60,000 children in the foster care system — with Black youth disproportionately represented — and about 4,000 of these youth age out annually. About half of the youth who age out end up homeless or incarcerated, according to the Lilliput Families, a private, nonprofit agency in Sacramento that helps with foster and adoption services.

In Sacramento County, about 170 youth in foster care turn 18 years old and risk aging out of the system before they’re ready. California’s Extended Foster Care Program, which went into effect in January 2012, allows eligible youth to remain in foster care until age 21. These young adults can access independent living skills and supportive housing as they transition to life on their own.

Locally, the Sacramento County Department of Child, Family and Adult Services help these young adults access services such as the federally-funded Independent Living Program for people ages 16 to 21, which pairs with the state’s Transitional Housing Programs for Current and Former Foster Youth to assist with issues such as transitional housing, financial assistance, employment and daily living skills, such as money management and decision-making. But for youth who either don’t know about these services or don’t meet their education or employment requirements, they might end up without a safe place to live.

“The challenges facing foster youth in general are insurmountable, specifically Black former foster youth,” said Amber Celmer, executive director of HomeAid Sacramento, which is based in Roseville. “Because of the underlying access issues, [it] really does increase the chances of them ending up homeless.”

HomeAid, the charitable arm of the North State Building Industry Association, builds and renovates affordable housing and shelters for people transitioning out of homelessness. Celmer, who is white and herself a former foster child who grew up primarily in Sacramento and Placer counties, says her organization has worked on many projects involving housing for aged-out foster youth.

Figuring out the housing piece for former foster youth is important, Celmer said, because it’s a “stepping stone” to self-sufficiency. Often, aged-out foster youth who access affordable housing programs are responsible for paying rent and utility bills. And with their housing secured, they can devote more energy to college or jobs.

“They are also given the dignity of the house [and] have a place to stay that is their own. … They too can grow in this community and become active participants and taxpaying contributors to our communities,” she said.

One of HomeAid’s projects, Emergency Bridge Housing at The Grove, serves emancipated foster youth aged 18-24 who are homeless (HomeAid installed cabinets and flooring). The North Sacramento housing opened in 2020 and includes 24 cabins. The shelter is operated by the Sacramento Housing and Redevelopment Agency, and the nonprofit First Step Communities oversees daily operations at The Grove and helps the youth move into permanent housing.

Another HomeAid Sacramento partner, The Taylor House in Roseville, provides affordable housing for young women transitioning out of foster care. For Jacqueline A., 25, a Black woman, The Taylor House has been critical to her well-being in early adulthood. At 6 years old, she entered foster care. Her father was in prison, she said, and her mom would leave for weeks at a time with no food and no water, and the heater turned off.

Jacqueline said she went through at least five homes when she first entered the system, then later went to 20 different homes in two years. “I got sent to Juvenile Hall because they didn’t have a home for me until [a spot] opened up at a group home,” she said. “So pretty much if you’re in foster care [and] you don’t have a place to stay, it doesn’t matter if you got in trouble or not — Juvenile Hall is where they send you.”

Jacqueline also experienced homelessness on three separate occasions, sleeping in her car. She worked at night while attending school during the day, trying to figure out her next move. “I learned a lot of life lessons,” she said. “I know more about the streets than I know more about books.”

At the age of 18, Jacqueline got a room at The Taylor House. Lisa Addy-Peat, the nonprofit’s founding director, said the home takes eight girls at a time, ages 18 to 24 and focuses on skills in five key areas: employment, education, transportation, health and wellness, and budgeting. “It doesn’t matter if they’re a Taylor House or White House or whatever house they’re in … that’s what all of them need,” Addy-Peat said.

Tarshianna Clark, a 30-year-old Black woman, was in the foster care system when she was 7 years old until 9 when her aunt got custody of her. Clark was 19 and living on campus at Sierra College in Rocklin when she learned she was able to move to The Taylor House — and soon learned the basics of adulthood, including how to set up a savings account, pay bills and complete her college course requirements.

“Without The Taylor House, I probably wouldn’t be where I am now,” said Clark, who today works in the real estate appraisal business and recently moved to a rental in Midtown Sacramento.

As for Williams, she says she likes living in downtown Sacramento because of nearby amenities where she can spend time with friends and easy access to public transit. She’s active with Wind Youth Services in Sacramento, a nonprofit that provides, among its many services, shelter for homeless and runaway youth ages 12 to 24. She finds work in the gig economy and hopes to soon attend Cosumnes River College, where she might take journalism classes because she loves to write.