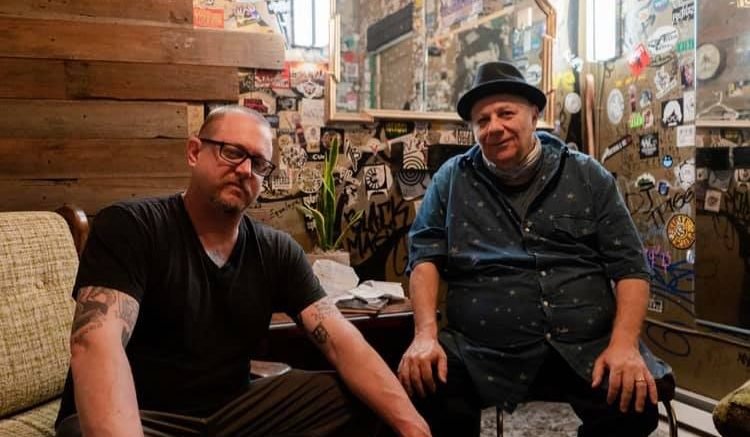 The Greek god Helios recently seemed to manifest on 33rd street, the weekend’s setting sun glistening on the faces of about 200 beer fans and their canine companions at SacYard Community Taphouse. In the open outdoor space, co-owners Dan and Melody Thebeau, and Tracy Letchworth, enjoyed a jamming live set by Loose Engines, who had just taken stage.

That same Saturday, comedian, actor and podcaster Eddie Pepitone dropped the seventh episode of his new podcast “Apocalypse Soon” on Youtube. Pepitone will be bringing his “shouty” comedy to Sacramento for the first time in his storied career on April 17. The 10-stop tour he and opener JT Habersaat have planned over the next two months promises to land Pepitone in cities he hasn’t had a chance to perform in. When it comes to the Capital City, he’ll take that chance at SacYard Community Taphouse.

According to Dan Thebeau, Pepitone’s ticketed show means the beer garden won’t be open like any other night. He added that it’s been hosting comedy on the second Thursday of each month for two years now, working on this feature with Sacramento comedian Ben Rice.

“Ben also collaborated to bring Eddie Pepitone here,” Dan noted. “We’re looking forward to welcoming him to Sacramento! We generally do everything outdoors, unless we’re getting bad weather. We have a huge outdoor space, which is where the show will be. We have a smaller indoor space that’s about 1,500 square feet.”

Pepitone and Habersaat began touring together before the pandemic caused a disruption to live performances throughout the entertainment industry. In 2019, they paired up for a 10-day tour.

“COVID has a way of making time completely irrelevant,” Pepitone said, recounting touring with Habersaat. “Once we both got vaccinated, we toured last year, too. We’re just a really good combo.”

Habersaat has found that, because both comics grew up in New York, their personalities share a lot of intricacies. He also acknowledged that his tendency to take over as de-facto road manager brings harmony to their partnership.

“I am a self-starter, so I like handling the details when we’re on the road,” Habersaat acknowledged. “I really do think that a huge portion of why we relate and get along and work so well, is that we speak the same native New Yorker talk. We can ball-bust each other and talk shit to each other; it’s just what we both grew up with.”

As a fan, Habersaat admits that he feels lucky to be able to join up with the comedic force that is Eddie Pepitone.

“Eddie’s literally one of the best living comedians; he’s the sharpest motherfucker,” Habersaat observed. “I also enjoy the fact that we get to go to these places together and I get to watch one of the best comics in the world every night do something completely unique.”

As an actor and comedian, Pepitone occasionally appeared in skits on Late Night with Conan O’Brien and, in 2003, saw an uptick in notoriety appearing as a pledge in Todd Phillips’ feature directorial debut, “Old School.” In the years since, he’s earned a sizeable following as a stand-up, a guest and host of several podcasts and was featured in a film called “Bitter Buddha,” a documentary profiling his rant-filled career in comedy — a film who’s limited release included special screenings at Sacramento’s Crest Theater.

In addition to his stand-up career, which recently culminated in the February release of his album, “Swamp Beast,” Habersaat writes books, creates unique plastic action figures and runs the Altercation Comedy Festival, a three-day event in Austin, Texas. That gala features over 80 comics.

Habersaat suspects that his dedication and work ethic paid off when Pepitone performed at the Altercation Festival and noticed how well Habersaat was able to juggle his many projects. He himself is no stranger to Sacramento. His last booking in town was at the Blue Lamp (R.I.P.) in 2011.

“The venue was fantastic,” Habersaat remembered. “I haven’t been to Sacramento in many, many years. We’ve had good shows pretty much everywhere, but I mean, California has always been good to us. We’ve always had a good time there so far, knock on wood.”

When he learned that his performance is happening in a neighborhood complete with a CalFit, a farm and pet supply store, a hospital and medical offices – in addition to SacYard’s spacious offerings – Pepitone joked that he already had his visit to Sacramento planned.

“I think my itinerary would be: hospital first; I want to get checked out. Then I would have a beer and then I would head to the feedstore,” Pepitone cackled, sounding excited about the prospect of the hatchlings at Western Feed. “Live chicks? Well, I love women, so it would be great. I didn’t know they were selling them. Sacramento does things differently.”