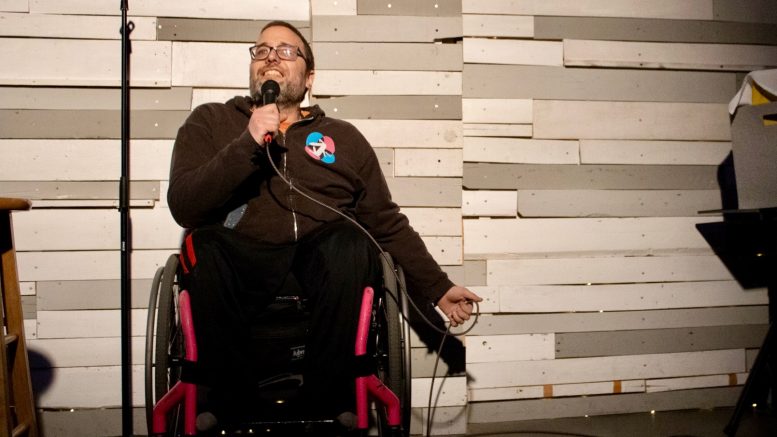 Local comedian Dan Smith introduces himself to an audience during the Body Pozi Comedy show at STAB Comedy Theater on Feb. 25. Photograph by Madelaine Church

Derek Dozier recently walked on stage at STAB! Comedy Theater and quickly launched into a story.

Dozier, who uses they/them pronouns, told an evening crowd about a journey of discovering their sexuality and gender identity. Dozier claimed they knew they weren’t straight their entire lives, but figuring it out included a conversation with a bishop at their Mormon church.

“Derek? Have you had gay sex?” the bishop asked Dozier.

The conversation was happening in a dark room. It was just the two of them. Dozier recalled that the bishop was actually coming onto them.  The shocked audience could only react with laughter.

Dozier is the creator and producer of the monthly Body Pozi Comedy show at STAB!, where the goal is to bring body positivity through humor. This show is put on with a rotation of comedians and happens the last Friday of every month at 8 p.m.

“I wanted to showcase the beauty and simplicity of being true to yourself and telling your own story,” Dozier said. “This show is an easy opportunity to shed light on all of the kind of people who get less stage time.”

STAB! Comedy Theater has been hosting in-person events since May of 2021, though it hit a virtual-demanded snag for a little bit from the omicron variant. When the pandemic first began, all of the club’s Friday and Saturday comedy nights were streamed on Twitch, which made it easier for comedians who are out of town to participate. Now, STAB! offers some shows that are only streamed on Twitch, and others, like the Body Pozi Comedy Show, that people can attend in-person. The theater is located on 1710 Broadway Avenue near the historic Tower Theater.

Jesse Jones is the owner of STAB! and has been running it for four years.

“The Body Pozi Show represents our mission statement by giving people opportunities that they might not necessarily be able to get in other places,” said Jones. “We try to give a place to people to develop, get big enough, and outgrow us.”

Dozier’s recent performance at the theater included expounding on how they discovered they are non-binary.

“I was scrolling through Instagram,” Dozier remembered. “I saw these thin women, and beautiful chubby women with thigh gaps! I realized more than I wanted any genitals, I just really wanted that gap between my legs.” Dozier’s backside turned towards the audience. “Right at the top like a keyhole!” They added with their face gleaming.

Dozier wants the audience at Body Pozi to get to know themselves by getting to know the comedians. Dozier also wants to create a safe and welcoming environment for all.

Dan Smith, the event’s host, is a big part of that. Smith is a disabled comedian in Sacramento. Smith has spina bifida and has been in a wheelchair his entire life. In fact, he has the most intense type of condition, called myelomeningocele. Smith finds humor in talking about his disability, as well as his three years of sobriety.

“I had to quit drinking.” Smith told the audience “If I had gotten one more DUI my wheels were gonna get impounded. Talk about a pub crawl!”

Ford appeared on stage and made a confession to the audience.

“Who here knows about kink.com?” Ford asked the audience, the room filling with uncomfortable silence. “You vanilla freaks!”

The show gave Ford the chance to openly discuss their sexual experience in graphic detail. It was an example of how, while there are topics that are not normally discussed or joked about in public, the Body Pozi Show creates a space for everyone to be open.

Able, who’s from Africa, shared his experience of living there. He enjoys people’s dumb reactions when they find out where he came from.

“You’re from Africa?!” Able said, mirroring how most people react to the news. “Oh my goodness you poor thing! Wow! It must have been tough for you out there, huh? Just running out there naked, nowhere to go.”

Littleton is a comedian and magician in Sacramento. He discussed his weight loss journey, along with discovering and practicing magic and overcoming religious trauma.

“Don’t lose weight to make yourself happy because it doesn’t work,” Littleton said to the audience.

Ellen Bezanson, who sat in the audience, said the show touched on themes that felt familiar – and made her laugh.

“I liked that the show touched upon these issues by making it balanced in a way,” Bezanson reflected. “It was comedic but not mocking. I also liked how it brought up body positivity, because I relate to the struggle behind it and I related to the comedians,”.

Tickets for the Body Pozi show are $8 for those wanting to attend in-person. Streaming on Twitch is free, though supporters can help by buying a virtual ticket fee of $5.

1 Comment on "Positively comedic: The Body Pozi show at Sacramento’s STAB! Theater sees a host of voices get laughs  "