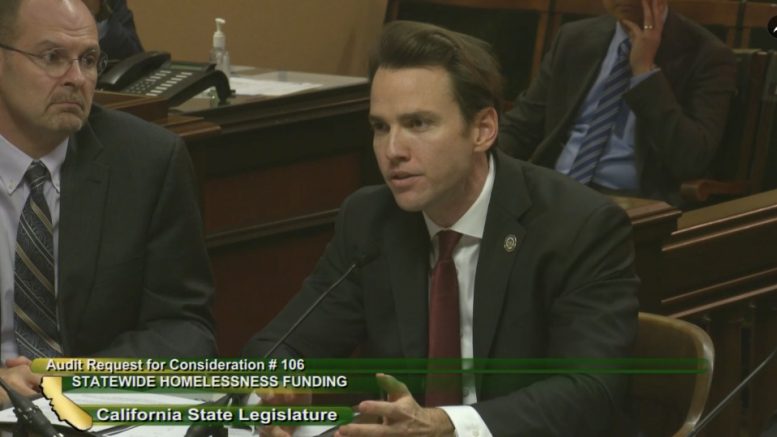 These endorsers largely knew Kiley as either their representative in the State Assembly or as a firebrand critic of Gov. Gavin Newsom. But few – if any – knew that his recent background included what Democratic Congressional opponent Dr. Kermit Jones has termed Kiley’s “radical associations.” These Dr. Jones quickly called out not long after Kiley entered the race, saying Kiley should provide an explanation.

But over the past two weeks, Kiley and his team have not responded to Dr. Jones or to questions from SactoPolitico.com (S/P). This included not answering why Kiley agreed to serve as a featured speaker at a March 2021 rally co-organized by Cordie Williams in front of the state capitol. Williams is a controversial figure who two months before the recall rally publicly called on Americans to arm for civil war and, before that, claimed that the political Left was marching Americans toward an Auschwitz-style furnace.

At the rally, Williams spoke immediately before Kiley, and other speakers that day also had QAnon, hate group and militia ties.

California GOP Chairwoman Jessica Patterson also spoke at the rally. Previous S/P requests to her for comment on her participation received no response.

In the absence of comment from Kiley, S/P reached out multiple times to more than 30 current elected officials who have endorsed his Congressional campaign. Each was asked for comment on the March 2021 rally Kiley spoke at and to reaffirm their endorsements of Kiley. Only four reaffirmed. Two others said they are currently reconsidering their endorsements, but requested anonymity as they conduct their review. The rest did not respond

Of the four who reaffirmed their endorsements, three did so on the record. They were Placer County Supervisor Suzanne Jones, Folsom Councilmember Mike Kozlowski and Roseville Joint Union High School District Member Pete Constant.

Kozlowski said he wasn’t previously familiar with Kiley’s participation in the March rally, but explained it didn’t overly concern him.

“I do know Kevin very, very well, and I trust that he does not acquire opinions by standing next to anybody,” Kozlowski explained. “He has been a good, responsive representative for us in Folsom. I found him to be helpful every time we’ve asked for help, and I think he can carry that forward into other jobs.”

He added that he sympathized with Kiley, as it is impossible for elected officials to always know the “full complexity of everyone you come into contact with.”

But in Kiley’s case, S/P had contacted his Assembly office multiple times before the March rally. This included sharing the backgrounds of the co-organizer and other controversial speakers Kiley was slated to join. But neither Kiley nor his director of communications responded to these requests for comment.

Kiley’s appearance at the rally was also not a brief pop-in, as some elected officials with busy schedules will do. Instead, Kiley gave one of the longest speeches that day and stayed a long time in a tent next to the stage to sign books.

Via an email exchange, Roseville school board member Constant said he has known Kiley for several years and has personally observed Kiley’s “hard work and dedication to supporting not only those who live in his district, but all Californians.”

“[Kiley] has stood up on issues that impact our families and the education of our children, when so many other elected representatives have failed to do so. His statewide leadership on education has supported my efforts as a school board member to safely keep our students in class, where we know the best learning occurs,” he said.

Constant said while he does not know the co-organizer of the March rally, “I do not have issue with [those] characterizing his views as radical. Nor do I believe they characterize the thinking of mainstream GOP/conservatives.” He likewise said the beliefs of hate groups and QAnon supporters do not represent mainstream GOP or conservative thought.

That said, he felt it unfair to “condemn” Kiley for speaking at a recall rally co-organized by someone who had separately called for Americans to arm for civil war. His reasoning: “By that standard, any person who supported the recall would then have radical associations – an assumption that I cannot support. Dr. Kermit Jones’ demands for an explanation of Kiley’s ‘radical associations’ is merely a campaign tactic.”

In an email reply to Constant, S/P noted it was not accurate to suggest Dr. Jones equated Californians who supported a legal recall effort with an extreme individual who called for Americans to arm for civil war against their fellow citizens. Dr. Jones, in fact, never mentioned the recall in his S/P interview. What he did say was, as a Navy veteran, he takes offense at “elected officials at the state or federal level [who] raise their hands in support with people that are advocating for civil war. I think [Kiley] does need to answer for that.”

“When you share a stage with this type of extremism, you give it credibility,” he said last year. “You give it voice. You give it oxygen, and that’s the problem with the Republican Party.”

A tendency also exists among all partisans to give their candidates a pass for controversial associations while not extending that same courtesy to candidates across the aisle. For example, a Republican endorser of Kiley might say, “Of course he isn’t for armed civil war or QAnon.” However, that same individual in 2008 may well have considered it disgraceful then presidential candidate Barack Obama had associated with a former leader of the Weatherman Underground and worshipped in the church of Rev. Jeremiah Wright.

Yet, one key difference does exist between the Obama and Kiley examples. Back in 2008, candidate Obama answered questions about both situations. He even gave a major speech explaining why he denounced Wright’s most controversial sermons while not renouncing Wright himself.

And Kiley? He has remained silent, but S/P welcomes the opportunity to interview him on this and other topics.

The recently redrawn CA-3 centers on Placer County and the Sacramento suburb of Folsom, but it also ranges in the north from Plumas County 400 miles south to Death Valley in Inyo County. In addition to Kiley and Dr. Jones, Sacramento County Republican Sheriff Scott Jones this week announced his candidacy. Los Angeles-area Republican Omar Navarro and Nevada City Democrat David Peterson have also declared for the race.

The 2022 primary will be June 7. The top two vote-getters regardless of party move onto the general election on Nov. 8.

For this article, S/P reached out multiple times to the following elected officials publicized by Kiley as having endorsed him. Normally, endorsers are proud to share why they back a candidate, but only three of Kiley’s endorsers responded on the record and reaffirmed their support. They are marked with an *.