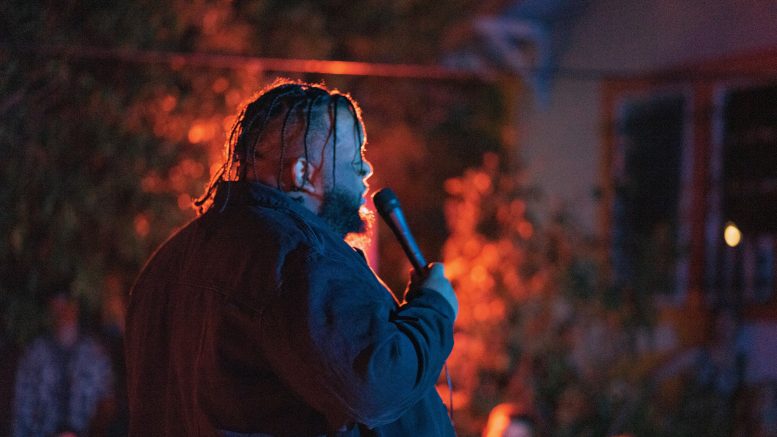 “Everything you see was either found, built, or stolen,” David Samuel says, taking a drag from a spliff.

His long mustache hides the end of the joint. His brown hair flows in whatever direction the wind decides to push it in that moment.

Samuel calmly moves towards the random collection of chairs scattered in haphazard piles across the overgrown weeds. There’s dozens of unassorted dining chairs, garden chairs and anything else that can serve as a functional seat in this backyard. He dusts off an old bus bench sitting against the fence and adjusts a stack of steel folding chairs.

Joint-in-mouth, Samuel walks over and adjusts a crooked painting hanging on the fence with both of his free hands. In about a week, around 50 people will show up in this backyard to watch Orange House: a monthly Do-It-Yourself stand-up showcase hosted out of Samuel’s old home. He stands front-center of the turf-covered pallets that makeup the stage and he faces an imaginary crowd.

“Welcome to Orange House,” he says into an invincible microphone; his mustache hiding the smile on his face as he kicks a hardened dog turd off of the side of the stage. “I’ll pick it up before the show.”

Over the last year, Samuels and his former roommate, Cody Arseneau, have been running the backyard comedy club out of the Richmond Grove neighborhood.

It started with an idea by Samuel to create an ongoing monthly stand-up showcase where he could handpick the performers, offer cheap live comedy to broke young people, and to pay his performers what they were worth.

For Samuel, that meant $10 tickets, free (donation-based) beer, and by showcasing his favorite comedians all from the comfort of his house. According to Samuel, Orange House dedicates 50 cents of every dollar they make to pay performing comics.

“I’m still not paying them what they are actually worth, but I’m trying,” Samuel says.

Arseneau currently lives in the home and is the venue’s DJ and announcer. He’s also running lights and sound.

Arseneau says he’s still getting used to having so many strangers in his home.

“It’s strange to have 50 people show up in your backyard out of nowhere,” Aresneau says. “But it’s validation in a way. Intimidating at first, but once the show starts going it’s really wholesome and cool.”

He adds, “It’s a really relaxed environment … when you’re in someone’s home, it’s a different vibe than being in a business or establishment, where you feel obligated to buy drinks,” Areseneu notes. “This is more of a house party kind of vibe.”

Comedienne Celeste Winter says the show is more intimate than other shows she’s performed at in the past. She took the stage at Orange House in September of 2020.

“People came intentionally – they had to find the location and they got all the information the day-of,” Winters says. “The only people that come to Orange House are the people that really want to see live comedy and are willing to do it in someone’s backyard.”

Samuel used to live in the home, but recently moved to San Francisco. He commutes back and forth between Sacramento and the Bay Area by bus weekly to help it setup. Samuel acknowledges he invests 20-to-30-hours-a-week preparing the monthly show.

“I wouldn’t do it if I didn’t believe in it,” he stresses. “The Sacramento comedy scene is growing. We’ve already had Kiry Shabazz, who did Comedy Central & [Tonight Show with Jimmy Falon]. Three years in a row, Sacramento comedians won NBC’s national competition. Sacramento is not a great city to make money as a comic, but it’s a great city to start comedy.”

All comedians on the show are hand-picked by Samuel. He does not allow auditions, watch tapes, or take requests to be on the show.

As for what the show holds for the future, Samuel says Orange House is planning on adding a second show on Thursdays starting in April and potentially adding live music shows to their schedule.

Tickets for Orange House are $10 and available to purchase through Evenbrite.

Orange House is on Friday at 8 p.m.

The address will be sent on the day-of the show to those who purchased a ticket.

1 Comment on "House of a thousand laughs: Comedy at Sacramento’s ‘Orange House’ hints at new possibilities in entertainment "