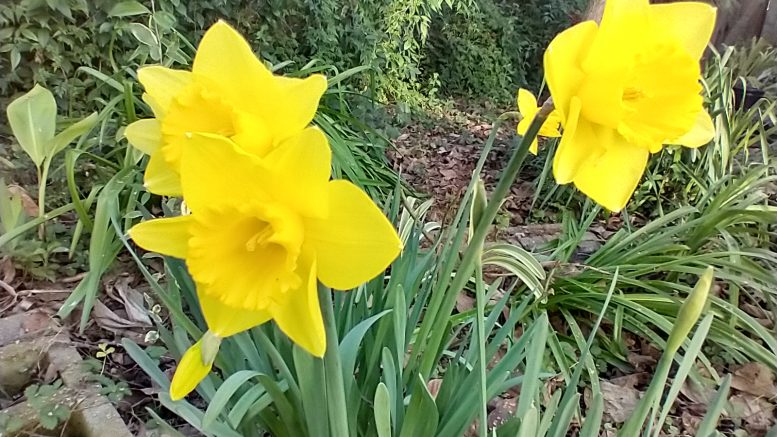 Daffodils in Sacramento are a sure sign of spring coming earlier than usual. Photograph by Debbie Arrington

That February sun sure feels good! As most of the nation shivers in snow, Sacramento is basking in near-record warmth.

But an early spring can be problematic. We should be puddle jumping now, not fishing for sunscreen.

According to the National Weather Service, Sacramento will see at least seven consecutive days in the 70s – more than 10 degrees above normal for early February. The all-time hottest February day on record in Sacramento: 76 degrees.

Although gardeners may enjoy the sun and early spring bloom, those higher temperatures could bring out an explosion of fungal disease on roses and other susceptible plants. Watch out for powdery mildew.

Hear that buzz? Those are mosquitoes coming out of hibernation and looking for that first “blood meal” – you! Those 70-degree days were their wake-up call. They’re particularly active in twilight hours.

Our dry streak continues, too. Downtown Sacramento hasn’t received a drop of rain since Jan. 7 – and there’s no rain in our forecast until at least Feb. 17. That follows a January that recorded only 0.05 inches of precipitation.

For those keeping a watch on water, Sacramento normally gets a combined 7.2 inches in January and February, our “wettest” months. This dry spell is wiping out the gains made during a soggy December.

It may feel like spring, but don’t rush out and plant tomatoes. Overnight lows are still mighty chilly, dipping close to freezing – especially on clear nights. Historically, Sacramento can get frost as late as March 23. In addition, soil temperatures have to rise significantly for summer crops to sprout and grow.

This dry spell underlines that we’re still in an exceptional drought. Measurements last week in the Sierra show the snowpack is suffering, too. Although considered 100% of normal, the snowpack was 162% of normal in December; the snowpack shrank during January from lack of new snow.

Will we have a March miracle with lots of late rain? Accuweather says it’s possible. Its forecast predicts major storm systems closing out winter – but those clouds could bypass Northern California and rain on Washington and Oregon instead. A stormy April is possible, too.

Meanwhile, Sacramento-area gardeners can make the most of these sunny conditions with outdoor chores, but wait to plant summer vegetables until at least late March. It may not feel like it, but we’re still in winter – for at least five more weeks.

Got garden questions? The UC Cooperative Extension Master Gardeners of Sacramento County will host an open garden day on Saturday, Feb. 12, at the Fair Oaks Horticulture Center in Fair Oaks Park, 11549 Fair Oaks Blvd., Fair Oaks. From 9 a.m. to noon, wander the master gardeners’ huge demonstration garden and learn from these experts. Admission is free and no advance registration is required. Find out more at https://sacmg.ucanr.edu/.

1 Comment on "As Sacramento approaches one of its warmest Februarys, gains from recent rain miracles fade"