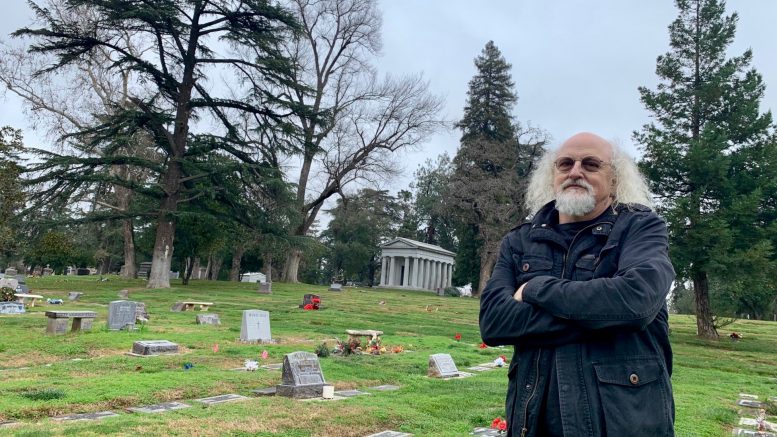 Everyone seems to enjoy chatting with David Kulczyk when he walks into his favorite coffee house in East Sacramento. The veteran magazine writer has a broad smile and easiness in his step, neither of which immediately hint that he spends most of his time thinking about murder. The unshakable affability Kulczyk flashes while saying ‘hi’ to the baristas also doesn’t signal that, three months ago, he very nearly joined some of his subjects below the ground.

The West Coast music writer-turned-Sacramento homicide historian had just finished his latest book on slayings of yesteryear when a massive heart attack came within a keyboard stroke of sending him to the promised land; a promised land, one dreams, where royalties are higher and freelance budgets are better. But, as Kulczyk is still here to elicit smiles from the espresso empresses at Chocolate Fish, he’s pressing on with advertising “Forgotten California Murders.”

Close call or not, words don’t sell themselves.

Kulczyk’s tome is the latest manifestation of an attempt to catalog and revisit the region’s more-interesting historic killings. He carefully and consciously unearths the city’s tragic, long-buried memories; but he does it as part of an underground movement that’s turning the True Crime genre on its head. Kulczyk is among a handful of local homicide historians who focus their pages on average perpetrators and average victims, rather than trying to score glamor points within the salacious world of serial killers. He makes no apologies for aiming his attention at working people – relatable people – whose fates took an unexpected turn.

Long before the Michigan native attempted that, he had plenty of experience writing about real events. Kulczyk’s career got off to a promising start 26 years ago when his short story “Aunt Edna’s Secret” won Fiction of the Year in the Seattle-based literary journal, Point, No Point magazine. He got more short stories published, only to have a gradual epiphany that many writers have on their way to reality: There’s no money in that.

Kulczyk switched lanes into nonfiction and became regular feature writer for The Seattle Times, Pop Culture Press, The San Francisco Bay Guardian, Maximum Ink Music Magazine, The East Bay Express and Sacramento News & Review. His first attempt at true crime was his 2008 book “California Justice: Shootouts, Lynchings and Assassinations in the Golden State,” released by Word Dancer Press. Craven Street Books put out his next three explorations of disturbing Death, and by the time he started “Forgotten California murders” he was taking his seventh spin around the publishing world.

Though the book’s narrative net traps the whole Golden State, it has plenty of darkness from the shadows of Sacramento, where Kulczyk has lived for 20 years in the La Riveria neighborhood. His wife Donna grew up in that part of the city. Though Kulczyk didn’t, he has been venturing through every corner of the capital via his constant digs into the newspaper morgue. Those archives have led to him re-discovering a number of bizarre incidents from Midtown to Southside Park, many of which took place during the Prohibition era. Kulczyk has some thoughts on why the period offers rich waters to dredge.

One example is Kulczyk’s new book is Ernest Beal, who was killed on Halloween Eve, 1921, in one of Sacramento’s first known road rage incidents. Another case involves Percy Barns, an abusive Sacramento man who became obsessed with stalking his ex-wife in 1928. Barns ultimately went on a slaughter spree that left four bodies cooling around the city.

Outside of sudden passion, Kulczyk also fishes up murders from Sacramento’s generational rumor mill. Those include stories like that of Jack Guidero, who was shot in Downtown in early December of 1938. There were whispers that Guidero was executed by the Black Hand, a secret extortion group from Southern Italy believed – at least by the people of the time – to be active in the region. Kulczyk titled that chapter, “Jack Got Whacked.”

Whatever the circumstances, the author thinks the details and landmarks around each case can offer an unexpected window into Sacramento’s past.

“What’s amazing is that places were open really late at night,” Kulczyk noted with a puzzled grin. “There was one guy who got shot at 2 a.m. at an ice cream parlor in Downtown. And, with the historic road rage incident, it was like 12:30 a.m. on a Sunday, and there were people out all over the place.”

One writer who also sees the value of using murder-intrigue to learn about our forebearers is Kulczyk’s counterpart, J’aime Rubio. For over a decade she’s been focused on a process of discovery across the region in books like “Behind These Walls” and “Stories of the Forgotten.” Like Kulczyk, and San Francisco writer Paul Drexler, Rubio puts a human face on victims who had once dissolved into the ether. She has long been a fan the way Kulczyk employs a similar approach.

“Perhaps at the time the events took place, their story made headlines,” Rubio said of the victims. “But soon after that, their story faded to black. David manages not only to uncover these types of stories, and in great detail, but he also puts the extra effort to share it with the public so that their stories are remembered, good or bad.”

Kulczyk says that, while he gets mutual support from writers like Rubio and Drexler, he believes “Forgotten California Murders” will still likely be his last true crime book. For obvious reasons, he’s focusing on his health these days. He’s also not sure how many more bones of good stories are left for him to unearth in the area. Nevertheless, he’s glad he stuck to his guns and stayed away from the serial killer craze. Something about the current pop culture obsession with it makes Kulczyk deeply uncomfortable.

“I really can’t stand popular serial killers,” he acknowledged. “They just get to go on with their fame … And even with some of the murder sprees that I do write about in this book, the ones in the 1920s, I have to wonder, if those murders had happened later on, would there now be a cult around those killers? That’s what I hate. That’s why I write about the more obscure ones.”

With a smile, he added, “People who were basically losers.”