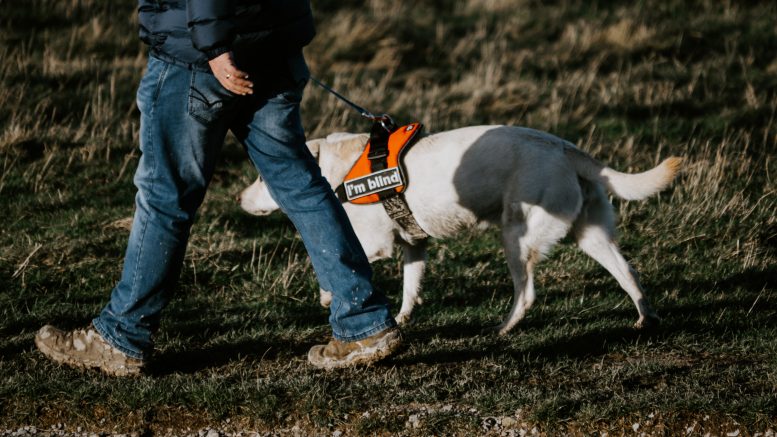 Fully qualified canines, people with disabilities, will move ahead of an anything-goes designation under new law

By Julia Lindbloom and Jenna Cooper

Fair Oaks resident Anita VanAmburg has raised 16 puppies for Guide Dogs for the Blind during the last two decades. She’s no stranger to the challenges faced by handlers when legitimate guide dogs encounter untrained emotional support animals. Emotional Support Animals, or ESAs, can distract or harm fully-trained service dogs while they are working, putting their disabled handlers at risk.

They can also cause business owners to become resistant to allowing any dogs in their establishment.

“In stores we’ve had people with their little support dogs that are not well behaved and try to attack our puppies in training,” VanAmburg said.

Californians may see fewer emotional support animals in local stores, restaurants, and other public spaces as soon as this year with Governor Gavin Newsom’s signing AB 468 into law.

The bipartisan bill, sponsored by Guide Dogs for the Blind and Canine Companions for Independence, seeks to prevent emotional support animals from enjoying the same rights and privileges as fully-trained service dogs. It mandates consumer-facing notices that lay out the potential civil penalty charges ESA owners face if they fraudulently represent their animal as a service dog.

“I’m so happy to see this bill go through,” VanAmburg said. “They’ve got to clamp down on this, there are people that really need a service dog, whether it’s a Guide Dog or a Canine Companion, and they need access to places without the fear of their dog being hurt.”

Some people and animals have been hurt, with rare instances of animals being killed. Assemblymember Laura Friedman (D-Glendale) authored the bill after hearing a harrowing story on NPR about a family that purchased what they believed was a trained ESA for their son.

“In one case it was a dog that was purchased for an autistic child and the dog turned around when [the family] got it home and killed the child’s other pets in front of him,” she said. “It caused a lot of trauma and it turns out the dog had just been adopted from the pound [by the sellers] a few days ago.”

The ordeal cost the family thousands of dollars, but no legal recourse was available.

“It turns out there was really nothing they could do under the law because there’s no law governing this,” Friedman said.

Friedman said that her bill, which goes into effect on January 1, is designed to protect both ESAs and service dogs by not putting either in a situation that they are unprepared for.

Under the law, all sellers or breeders will have to provide written notice that an emotional support animal does not have the training required to qualify as a service animal, nor do they have the same rights as one. The same restrictions apply to those selling merchandise identifying an animal as an ESA.

In addition, health care providers who prescribe ESAs must have an active license; have seen the patient for at least 30 days prior, and have evaluated the patient to determine need before they provide ESA eligibility-related paperwork.

Failure to follow these guidelines can result in civil penalty, the first of which would cost $500, the second $1,000 and $2,500 for subsequent violations, according to Canine Companions for Independence communications coordinator Wallis Brozman. Healthcare practitioners who fail to follow the new law are subject to discipline under their licensing board.

Some owners of emotional support animals don’t understand the distinction between ESAs and service dogs, leading them to fall victim to online retailer’s or breeder’s intentionally vague claims about ESAs. Other owners have taken advantage of businesses’ confusion, as well as their fear of questioning a disabled person about their animal.

“I see both sides,” VanAmburg said “There’s a lot of people out there just going online and getting the service dog vest or the piece of paper that says their [dog is] a service dog so they get housing. But I’ve seen people that will pay for a supposedly certified support dog, and I just cringe that they’re doing this. They don’t understand that they’re not paying for a real service dog.”

California resident Lane Edwards has been working with his service dog, Ziggy, since 2017. Edwards said the bill will change his public working relationship with Ziggy as it helps eliminate service dog fraud.

“I know people in my own personal life that I’ve had to have stern conversations with when they wanted to go online to get a certificate so they could take their dog everywhere,” Edwards said. “People need to stop taking advantage of the system.”

ESAs enjoy protection under the Fair Housing Act (FHA), but are not protected under the Americans with Disabilities Act (ADA) like service animals are, according to ServiceDogCertifications.org. Landlords must accommodate ESAs, but their distinction from any other pet ends there. Confused owners can wind up falsely claiming their animal is a service or guide dog, and then bringing them places they are not permitted.

“I think the people who perhaps do benefit from an emotional support animal honestly, a lot of times, do not understand the difference,” said Sheila Bose, leader of the Guide Dogs for the Blind – Fair Oaks Puppy Raisers. “And they’re at the mercy of people trying to sell them this vest, or this certificate, thinking that [the sellers] know what the law is but that’s not true.

Be the first to comment on "Stores, restaurants will see emotional support animals curbed so trained service dogs can do their own work"