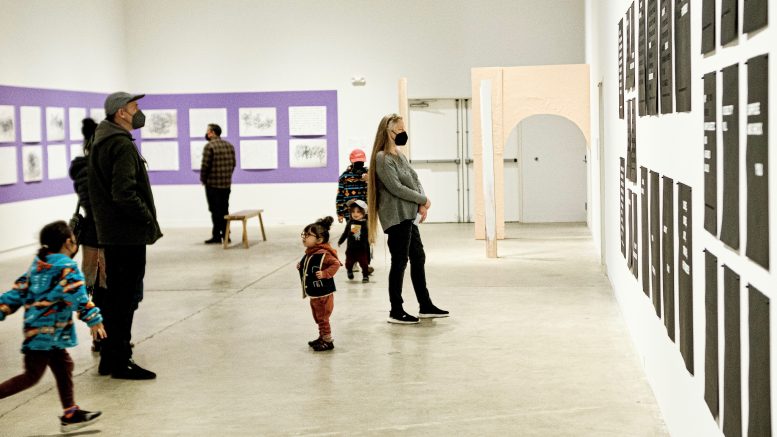 When artists are given the resources and creative freedom to explore their practice — beautiful things can happen.

For the past three years, Verge Center for the Arts, in collaboration with the Ali Youssefi Project, welcomed local and national creatives to be artists-in-residence, giving each the opportunity to delve deep into the topics they’re most passionate about.

That experience is featured in Verge’s latest exhibition Personal Histories: Work by AYP AIR Artists, which runs through Feb. 20 and documents six artists’ perspectives of personal identity, social injustice, race and cultural archetypes. These stories are told through a series of traditional mediums, including paint and photography, and even 3D elements that incorporate wooden structures and paper-mâché.

“I was really surprised by the cohesiveness of the work in the show, both aesthetically and also content-wise,” Verge founding director Liv Moe told SN&R. “Watching the program over the two years that artists were coming through Verge, even during the pandemic, I think the thing that was really cool was watching the synergy that would happen between artists from outside the region, and then artists from Sacramento.”

Verge’s latest show marks the culmination of a three-year partnership with the Ali Youssefi Project, an organization founded to honor the late community leader and developer who had a passion for the arts. The program paired a Sacramento-based artist with another creative living at least 35 miles outside of the region, giving each studio access, funds for materials and the opportunity to connect with other creatives on both local and national scales.

And although each artist’s focus varies, Personal Histories is not only a study of the beauty of individuality, but also a glimpse of how multi-generational artists managed to find a balance between offering an engaging experience and one that also encourages thought.

“Veronica Jackson’s pieces deal with what it’s like to be a Black woman in America,” Moe observed. “And then, Maurice [Moore] is also drawing on some of those same ideas, but then being part of the queer community and also working on thoughts around being neurodivergent, and how that affects his process. So, everybody was exploring something that was really deeply personal, but in different ways, and sometimes, relating directly to themselves and to these larger ideas. It just aesthetically, personally and conceptually, all came together in a way that was really unexpected, and very cool.”

Works on display run the gamut of topics and mediums. They include paper-mâché dolls made with centuries-old techniques that Sacramento artist Ramona Garcia learned from artisans in Mexico, all in an effort to keep the cultural practice alive. Garcia spent her residence with Yoshie Sakai, a multi-disciplinary artist based in Southern California who created an immersive installation using sculpture and photography that documents the experiences of many Japanese grandmothers in the Sacramento region. Those women lived as residents during a time when eminent domain was declared, and many were forcibly removed in order to make way for the construction of the Capital Mall.

There are also paintings on display by East Coast-based artist Jordan Seaberry, who Moe says really looked at similar concepts of eminent domain and equity surrounding the city’s Downtown area, especially relating to “Black, racial social justice issues in Sacramento.” He was dealing with similar geographies in the city, but through a completely different lens.

Local artist Nancy Sayavong, who worked on her concepts at Verge at the same time as Seaberry, created a stunning 3D project featured in the exhibition that re-purposed the raw materials she found left abandoned inside a home she bought in Roseville. Sayavong used them to create her large wooden arches and structures.

The artist-in-residence experience is one that Davis transplant and multi-disciplinary artist Maurice Moore says did more than bring a diverse panel of creatives together, but also showcased how each uses art to express what’s on their mind. Moore describes it as opening a dialogue about the issues that inspired their work.

“I thought it was interesting that a lot of us incorporated text, and a lot of work has to do with identity,” Moore reflected. “If you’ve ever been ‘othered,’ we tend to make work about our identity, or if you’re part of a diaspora, I think identity tends to come up a lot.”

He added, “Some of us have formal training, some of us are self-taught, some of us are into politics, but we’re all different generations. So, for me, it was just the differences within each other that’s what was interesting because we all seemed to come to this place of making art about these things.”

Moore, a North Carolina native, is studying toward his Ph.D. in performance studies at UC Davis and says being a Verge artist-in-residence gave him the convenience of creating and exploring his practice in a professional studio space surrounded by an array of resources at his fingertips. He didn’t stress about materials or rent expenses; instead, he says he was just left to create and further expand his concept of blending the movement of performance art with the busy and energetic lines seen in his gestural drawings.

“You make marks when you write,” he noted. “The line exists in writing, the line exists when you move and dance. The line exists in different ways. So, it’s like me expanding the field of drawing, and expanding and broadening what drawing means and where it can go … It’s a way to make it more accessible to neurodiverse people or people who speak different languages or disabled people and also people of color. It’s my journey I’ve been on in terms of working with drawing.”

Although Verge’s partnership with the Ali Youssefi project has come to a close with the culmination of Personal Histories, Moe says the artists-in-residence program will begin accepting applications for local artists in the spring. In three-month increments, a new artist will move into one of Verge’s open studios, continuing the cycle of supporting a new wave of creatives and encouraging them to explore who they are and add their mark on Sacramento’s artistic community.