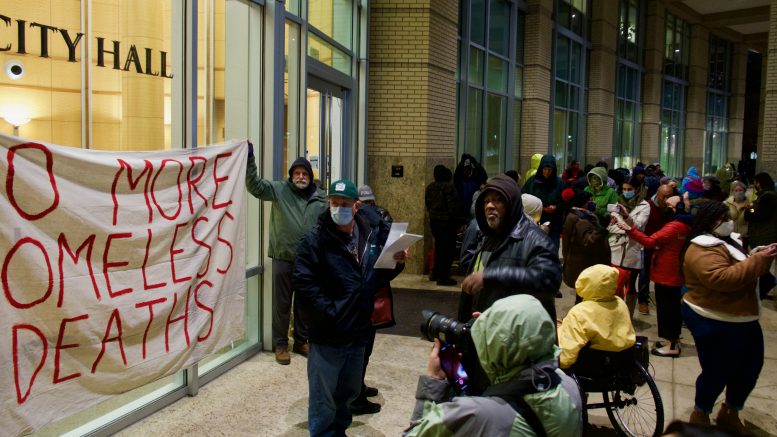 “Do not go gentle into that good night,” the poet Dylan Thomas warned us; but for 145 people who died lonely, anonymous deaths on the streets of Sacramento this year – some having their bodies and organs shut down by exposure – there was nothing gentle about how they finally passed into the darkness.

Just three nights before Christmas Eve, a large group of locals braved rain and fears of another virus outbreak to eulogize those lives that were gone. They gathered with electric candles glowing under the bland, brick edifice of City Hall, a place where, four years before, two men died within weeks of each other during freezing, torrential rain storms. As people drew names of the dead to read aloud, it dawned on many that little has changed since those bodies were discovered at the seat of city government. One of the names being commemorated was Vanessa Franklin, a woman living outdoors whose body succumbed to the elements last January.

“Yeah, she was homeless, but she was somebody,” Franklin’s niece Leona Diggs told the gathering. “She had eight brothers and four sisters, born in Quincy, California. Vanessa came to Sacramento with her family, and she had a trade, she knew how to build houses – but she still ended up out here on the streets.”

Glancing at the long line of people in tents and sleeping bags that flanked her, Diggs added, “As I stand here today, and I walk down this way and I walk down that way, my heart hurts … This is not O.K. for our people who are born in this country to be out here. It’s cold – I’m freezing.”

Driggs’ words were part of the 8th annual memorial held in the Capital City. Organized by the Sacramento Regional Coalition to End Homelessness, its names of the dead were gathered from the local coroner’s office. About 80% of the departed were men, while some 20% were women and at least four of the bodies belonged to children. According to SRCEH, the little ones who passed included a four-month-old infant. Sacramento County Coroner Kim Gin has stressed that this latest annual death toll for the homeless crisis is based on the best-known evidence, yet is by no means “a comprehensive list.”

Bob Erlenbusch, head of the coalition, told those around him that even more people had perished outdoors during 2021 than the previous year, which made remembering every name even more essential.

“This is our way of providing them a dignified remembrance as they’ve left this earth,” Erlenbusch reflected. “A-hundred-and-forty-five names, yet City Hall is empty? There’s no warming center here when there should have been. We’re way behind on the City Council being motived on its comprehensive housing plan.”

The link between the worsening housing crisis and those living a dangerous existence on the streets was also highlighted by Faye Wilson Kennedy of the Sacramento’s Poor Peoples Campaign.

Be the first to comment on "Lost faces on the longest night: Remembering Sacramento’s invisible dead"