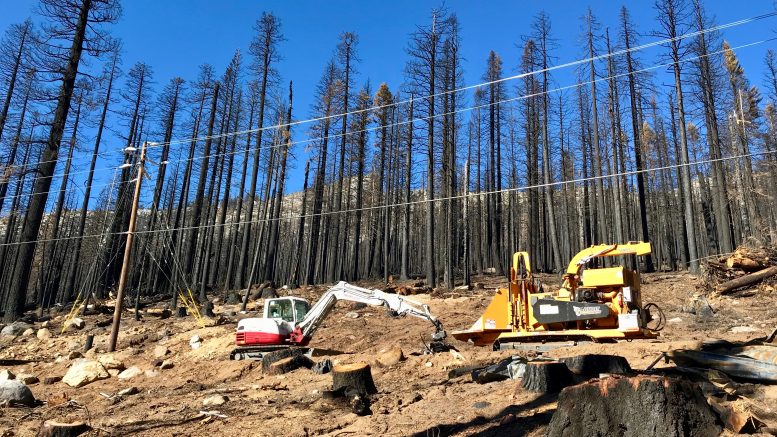 Heavy equipment parked in the burn scar of Camp Sacramento in the Sierra. Photograph by Ken Magri

Along Highway 50, a devastated mountain range waits to recover

As we head towards winter, the Caldor Fire that dominated the late summer has now gone into a dormant recovery phase, and all is relatively quiet.

For those who have yet to see it, the drive up Highway 50 looks more brownish and more barren. Huge swaths of bulldozed landscape crisscross the hillsides. Lone chimneys rise up from the devastated ground, leaving travelers with a stark reminder about the vulnerability of our wild lands.

Taking advantage of the cool fall weather, Cal Fire workers have conducted back-burn operations at low intensities. Along Highway 50, loggers are recovering usable timber that needed to be cut down in the fire’s aftermath. And El Dorado County initiated a state-funded program to remove hazardous waste, man-made materials and dead or dying trees.

But if you thought that fire season was over, think again. Caldor’s after-fire consequences will affect the Sierra throughout the winter and for years into the future.

In total, the Caldor Fire burned 347 square miles of the Sierra. It was one of only two California wildfires (the other being this year’s Dixie Fire) to have ever burned across an entire California mountain range, from its west side to the east.

The burned areas are dense with ash, chemicals and garbage. Root systems that hold the ground together have been compromised. Many scorched trees continue to stand, but will eventually fall from the weight of winter snow.

In many areas, like the Desolation Wilderness, thick layers of duff covering the forest floor burned right down to the bare dirt. Thousand-year-old bristlecone pines have disappeared, while large granite and quartz rocks exploded in the heat.

“We know there was a time before modern fire suppression when fires burned naturally at frequent intervals, burning away lighter fuels while sparing more of the larger trees,” said former KXTV News live-shot reporter Dave Marquis, who covered Sierra wildfires for 24 years.

It is true that Native Americans used controlled, low-intensity burns to manage the forests for centuries before European settlers arrived. “But when we began controlling fire it allowed those lighter fuels to build up,” said Marquis, “bringing hotter fires that laddered up into heavier fuels.”

“The full extent of the high-severity vegetation burn area created by the Caldor Fire is still under investigation,” said Nic Enstice, Regional Scientist for the Sierra Nevada Conservancy. “But intense fire behavior and reports from the field suggest that there are some large areas where the fire killed all, or nearly all, vegetation.”

When the spring runoff comes, all of that ash, soot and toxic waste will eventually burrow its way into the ground, or be carried into the rivers and streams that form the Sierra Nevada watershed.

The problem with water runoff

As soon as the Caldor Fire was contained, workers were already spreading out absorbent socks along the burned ground to slow the runoff from rain and snow.

“We know it is common to see increased erosion and water quality impacts in watersheds for several years following a large wildfire,” said Dr. Alan Heyvaert of the Desert Research Institute.

Heyvaert said that landscape stabilization efforts can help reduce the erosion, but much of it depends on the kind of precipitation. “

Enstice agreed. “Typically, the most immediate and widespread water impacts following a large intense fire relate to the loss of forest cover and vegetation” he said. “This exposes soils to the full force of rain events.”

Something like that already happened in October, when several consecutive days of warm rainstorms drenched the Sierra. Those storms may have helped with the drought, but they were bad for freshly-burned ground which tends to repel rainfall, rather than to absorb it.

The result was a heavy runoff of ash, sand and inorganic burned materials that immediately clogged up stream beds and made its way into the various forks of the American River. Alongside Highway 50, Veerkamp Construction was contracted to scoop up the excess sand clogging the drainage paths and culverts which run underneath the road.

What is in that runoff?

A before-and-after comparison of beach sand, taken from the same location along South Fork of the American River, shows the post-fire sample to be darker and contain small particles of burned material not present in the lighter pre-fire sample.

Put a stick in the American River for a few minutes and it will begin to collect off-white foam, or flotsam, giving evidence of contamination from foreign substances.

“The byproducts of burnt forest material are complex,” said US Forest Service (USFS) Soil Scientist Eric Nicita. “The foam is likely a result of runoff from the burnt slopes carrying burnt forest residue into the river and being churned by the turbulent waters of the increased river flow,” he said.

A study on river water after the 2018 Camp Fire in Butte County found samples that were so full of toxic chemicals they couldn’t even be treated for human consumption.

Residue from fire retardant is also a possible ingredient in the water. Designed to create a chemical reaction that slows the fire’s ability to make flames, most fire retardants combine 85% water with 15% fertilizer and red coloring.

According to the USFS, the fertilizer contained in retardants consists of ammonia and phosphate or sulfate ions. The USFS itself cites a study which concluded that “a single retardant drop directly into a stream may cause a sufficient ammonia concentration in the water to be lethal to fish and other aquatic organisms.”

During a wildfire, birds fly away and tiny animals burrow underground or hide in rock clusters. Larger animals will run away or try to take shelter in lakes or rivers during their search for safety and quiet.

In the fire’s aftermath, the loss of habitat causes a re-organization in the wildlife world, where some animals will migrate to new areas and do well, according to the Oregon Department of Fish and Wildlife. Animals like raccoons and bears can take advantage of the situation, hunting and scavenging in new areas. Birds of prey have an easier time hunting rodents on open ground.

But fish can become the victims of whatever toxic materials run off into the water, and die-offs are not uncommon. Likewise, the immediate loss of habitat will make the coming winter much harder for young, old and injured forest animals.

Experts warn people who live in burned areas not to set food out for wildlife. Residents are also advised to keep their pets close to home.

As the fire burned east and north along the Highway 50 corridor, it cleared out old ground cover that unearthed tiny garbage sites from past generations of Sierra dwellers. Over the decades, especially before the 1960s, campers and cabin owners simply buried their trash on site, rather than carrying it home with them. Now, those bottles and rusted cans from shallow burial sites are lying out in the open.

Electrical and communications workers who rushed in after the fire also left behind trash. PG&E and AT&T employees traversed narrow mountain roads and worked along steep inclines to get electrical and fiber-optic lines re-strung quickly. “At the completion of this work, the system will have undergone a very robust rebuild and be well equipped to serve the customers impacted by the Caldor Fire,” said PG&E spokesperson Megan McFarland of that company’s efforts.

So, it’s hard to be angry with these workers, but some of their work sites were left scattered with dangerous materials. East of Kyburz along the 35 Milestone tract, power pole sites were strewn with shards of ceramic insulation, braided steel cable, small wires, clamps, brackets, screws, nails, electrical tape, zip-ties, plastic mesh and corporate signage.

“At this point, all PG&E lines and damaged facilities have been cleaned up restored,” said McFarland. But that wasn’t true, so we sent PG&E photos of the trash.

Later in a phone conversation, McFarland personally acknowledged that some of the trash (but not all) was PG&E’s, and apologized for the messy workmanship. AT&T was also responsible for leaving trash behind. But for its part, the communications company would not respond to several of SN&R’s requests for a comment.

The US Forest Service was then asked about it. “The focus is currently on restoration of service to the mountain communities in the area and it will take some time for full completion of the project, including all clean-up,” said Jennifer Chapman, Public Affairs Officer for the El Dorado National Forest.

“Our permit administrators are in the field with the utility companies to work in coordination and provide for the proper disposal of hazards, vegetation that threatens repairs, and other material,” said Chapman.

But the coming winter snows would cover this trash for months. A robust spring runoff next year could then move some of it into the stream flow. So this journalist, whose family owns a cabin at Milestone 35, cleaned up the worksites in mid-November, while the trash was still visible.  The 45 minute clean-up filled three grocery bags.

How will the Sierra recover?

Whether or not the Caldor Fire was caused by climate change, its aftermath will certainly affect it.

“Intense fires like the Caldor Fire can convert forests to grasslands, permanently decreasing the amount of carbon that is stored on that landscape,” said Enstice. In some areas, ferns, grasses and other ground-cover plants already sprouted and are beginning to dominate burned hillsides.

After the snow melts next spring, tree seedlings will naturally start to sprout. In addition, organizations like the Sugar Pine Foundation will conduct tree-planting early next year. Since its formation in 2004, the Tahoe-based not-for-profit group has planted over 155,000 sugar and white pine trees.

A recovery will surely happen, but wilderness experts all agree that it will take several decades. Dave Marquis pointed out that burned areas along Highway 50 from the Cleveland fire, which he reported on in 1992, are still not completely recovered. “The trees that were replanted after that fire are clearly all the same age and still not fully mature,” he said.

2 Comments on "After the Caldor Fire"