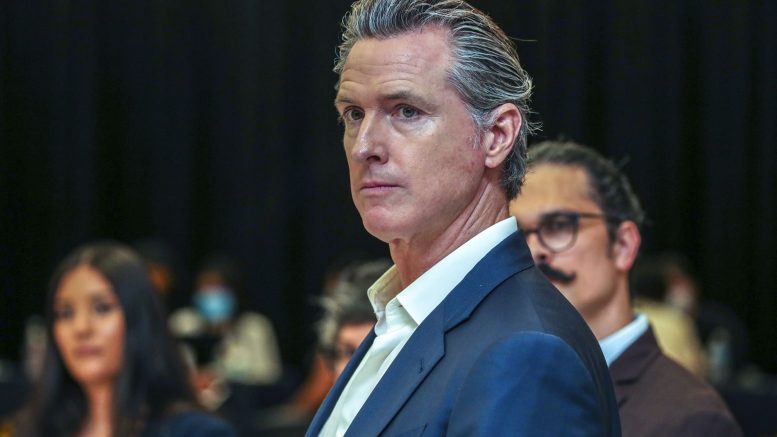 By Rachel Becker for CalMatters

Gov. Gavin Newsom will no longer be leading California’s delegation to the United Nations Climate Change Conference, “due to family obligations,” his office announced today.

After weeks of uncertainty, Newsom had said Monday that he planned to attend the international summit in Glasgow next week. Now, the California contingent will be led by Lt. Gov. Eleni Kounalakis, though Newsom will be participating virtually and “focusing on California’s landmark climate change policies,” communications director Erin Mellon said in a statement.

The governor’s office did not provide further details. ButNewsom did not have plans to make any major announcements at the conference and had privately questioned his purpose in attending, according to two sources not authorized to speak publicly.

Lauren Sanchez, senior advisor to the governor on climate, laid out California’s main talking points for the conference on a call with reporters this afternoon — including that the cost of failing to act is too high, and that California will not wait for Washington for action on climate change.

“From the oil spill last month to our horrific fire season California will share a message around urgency and a grounding sense of the costs of this crisis,” Sanchez said.

Lawmakers and environmental advocates had mixed reactions to the news of Newsom’s absence.

“While I wish he was able to attend because being in the room with world delegates really makes an impression, all the secretaries and legislative leaders will join with the (Lieutenant Governor) to put our best foot forward,” said state Sen. Bob Wieckowski, a Democrat from Fremont who will be attending the conference.

RL Miller, a member of the Democratic National Committee and president of Climate Hawks Vote, said Newsom’s actions in California matter more than his attendance in Scotland.

“I think Newsom still has a chance to be a transformative leader in terms of shutting down and phasing out the oil industry in California. I am more interested in practical policies that bring short-term results than in speeches,” Miller said. “He’s capable of making a fine speech in Scotland or in Sacramento.”

Before Newsom announced that he would no longer be attending, Neena Mohan, climate justice manager for the California Environmental Justice Alliance, called on Newsom to champion “California’s bold actions towards an oil and gas phaseout and end to neighborhood drilling, while sharing the lessons learned from the failures” of California’s carbon market.

Even if Newsom isn’t attending in person, Mohan said today, “our main message and hope for the Newsom administration remains the same.”

About 190 world leaders and tens of thousands of others are expected to attend the conference, called the Conference of the Parties to the United Nations Framework Convention on Climate Change, or COP26.

Similar to “a trade association meeting,” as former Air Resources Board chairperson Mary Nichols called it, it’s where national leaders hash out the details of an international treaty tackling climate change and others in the climate world mingle and exchange ideas.

Though states don’t have an official role at the negotiating table, California has long had an outsized presence at the annual meetings — especially under former Governor Jerry Brown.

“It’s very good that Governor Newsom is there showing the flag for California, and encouraging others. But as I say, the underlying fact is that the world is losing ground, not gaining ground,” former Gov. Jerry Brown said on Wednesday, before Newsom announced that he would no longer be attending.

In the briefing with reporters, California’s top environmental officials voiced confidence in Kounalakis, a former U.S. ambassador to Hungary with roles on the Ocean Protection Council and California State Lands Commission.

“These are essentially grand exercises in diplomacy across countries,” said California’s Natural Resources Secretary Wade Crowfoot. “Who better than to have, actually, a former U.S. ambassador who serves as the lieutenant governor?”

She was not on the call, but Kounalakis said in a statement: “When it comes to climate action, California’s leadership is among the most stable, steadfast and reliable in the world. Although California has made remarkable progress, commitment across national and subnational governments is the most critical component of our fight against climate change.”

Each of the top environmental officials described key areas they hoped to address during the conference, including tackling methane pollution, scrubbing carbon from California’s transportation sector, better managing land to improve carbon storage, and ensuring equity in the state’s climate programs.

“It’s super focused on implementation of what it actually is going to take to turn around the climate emergency,” said California Secretary for Environmental Protection Jared Blumenfeld. “And while we have a lot to do still in California — and really are going to learn from the international community about what more we can do that they’re doing — we also have a lot to teach.”

Sanchez said that she will join Kounalakis in Glasgow from Monday through Wednesday, and meet with tribal partners and other delegates, including from Canada, Mexico, the European Union, “and our amigos in the White House.”

Air Resources Board Chairperson Liane Randolph also has a full schedule, with meetings at both the national and subnational level, including with delegates from India among others. “And of course, we’ll be having conversations about a variety of topics, including carbon markets, the low carbon fuel standard, cap and trade,” Randolph said.

Critics of California’s cap-and-trade program, the first in the nation to create a carbon market for all segments of the economy, have raised concerns that it might be too weak to reach the state’s greenhouse gas targets and that it allows continued pollutionof frontline communities.

Ryan Schleeter, communications director for The Climate Center, said that Newsom’s absence at the conference is “disappointing given that COP26 desperately needs an injection of ambition” and is “all the more reason for him to step it up at home and put his full weight behind policies to reduce climate pollution and protect communities.”

But Gary Hughes, California policy monitor with the international environmental organization Biofuelwatch, commended Newsom for pulling out of the conference.

“We think the entire delegation from California should pull out of COP26 if it is that California is committed to the promotion of equity in the development of climate action,” he said. “Polluters have far too much access in the (United Nations Framework Convention on Climate Change), while many people from impacted communities around the world cannot even go to Glasgow, much less participate.”

1 Comment on "What does it mean for Gov. Newsom to skip the climate conference?"