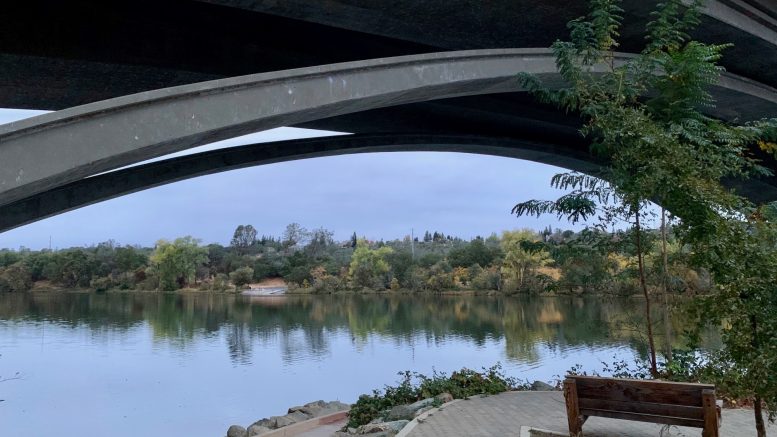 In 2018, Phaedra Jones did not know much about Folsom. She accepted a delivery assignment from her employer, UberEATS, bringing food from Stockton to the Cliff House Bar, a venue that overlooked the American River. As she approached the restaurant, she noticed an official sign on the edge of the parking lot. It read in bold white letters with a directional arrow, Negro Bar. She felt perplexed and offended, as she interpreted that sign to indicate a separate bar for Blacks. Later, as she drove the area, she would realize it pointed to a state park and boat launch. As a black person, she felt offended and uncomfortable. She made her delivery, got out of town and headed for the nearest freeway on ramp home.

Phaedra felt so disturbed by an official government-sanctioned place having a name that used an offensive term, that she started a petition to request a change of name for the state park. Today, that petition has over 67,000 signatures and workshops have been held by the California State Parks Department to consider the renaming of Negro Bar. A proposal to change the name to Freedom Bar has been under review since January, 2019.

Recently, Hannah Braidman, a Folsom resident, joined the grass roots effort to rename the park. In a June article last year in The Sacramento Bee, she told reporter Mara Hoplamazian that “after the passing of George Floyd, I was going to all of these protests and wondering what more I could do.” She added, “I understand that as a white woman I simply am not as affected by this park name as my Black neighbors are.”

Braidman has reached out to Folsom’s Black community and arranged meetings with the city mayor’s office, as well as the California Parks Department, the U.S. Board on Geographic Names, and to local citizen groups, like the Friends of Negro Bar – who oppose the renaming proposals.

Where did such a controversial name originate? According to the California Department of Education (sourced to Historian Clarence Ceasar, California State Library), the answers are found in the roots of the Gold Rush era and the early development of a mining community around Folsom. From the beginning, the landing site had a heavy influence from the Black community. The owner of the land was William A. Leidesdorff. As an Afro-Caribbean businessman, he had invested in the land for a cattle ranch. He died before the gold discoveries. In 1849, as miners rushed into the area, three enterprising Black men staked a claim at what’s now called Negro Bar. Strong, newly freed slaves had been recruited from the East to come work the mining fields of Northern California. Negro Bar – and later the village of Negro Hill – became successful mining claims, raising the recently emancipated Black prospectors out of poverty.

The names of these early pioneers are largely lost to history. One Black man, probably a freed slave, was named Kelsey. One of his five partners was named Newhall. It is reported that the Negro Bar claim yielded $300 per-day in late 1849. Eventually, Negro Hill would grow into a thriving multi-racial village of 1,200, bustling with Chinese, Irish, and Black residents.

The names for places in the mid-19th century were not racially sensitive. Originally, Negro Bar and Negro Hill had been called N***** Bar and N**** Hill. It is sad that such terminology persisted until 1964. In the early 1960s, the United States Geological Survey and the U.S. Board of Geographic Names banned the use of the N-word and adopted a policy of replacing all situations where that name was attached with “negro.” The two words are linked inextricably in history and culture. In present times, both words are considered objectionable by many Americans.  As our country struggles to reexamine the historical antecedents of statues and public spaces, we are confronted by the need to examine the naming of places.

Several names have been suggested at community workshops—Black Miner’s Bar, Freedom Bar, African American Bar, or the unsatisfactory compromise of Historic Negro Bar. Who decides? The various proposals have languished on the desk of the California Parks Director for nearly two years. Should this be a bureaucratic decision? Or is it the time for the communities most directly impacted—Black, Native American and Asian-Americans – to have their voices heard?

I live in close proximity to the park. I have taken my family there for picnics and kayaking. My youngest son was baptized in the river waters as a teenager. As a family, we have talked about the oddness of the name. Until recently, we knew nothing of the rich historical context regarding Black entrepreneurial miners, the freed slaves gaining economic independence or the diverse mining town that overlooked the river.

I feel strongly that the offensive word needs to be removed. I hope that the renaming comes with an educational effort and dedication to a proper recognition of the cultural forces that contributed to the development of modern-day Folsom. A renamed facility should have a proper monument that depicts the Black and Asian miners of the Gold Rush. In nearby Roseville, we have an open space network called Miner’s Ravine. Maybe we can recognize the people who founded the claim—men like Kelsey and Leidesdorff. The founding principles were Black, so the new name should honor that. Most of all, I feel that the feelings, perceptions, and values of the affected communities be prioritized. The final naming should be left to them, not to state officials.

Mark Heckey is a free-lance journalist and former veteran of city government in the region.

6 Comments on "Essay: Folsom’s ‘Negro Bar’ should be renamed, but the contributions of Black pioneers shouldn’t be forgotten"