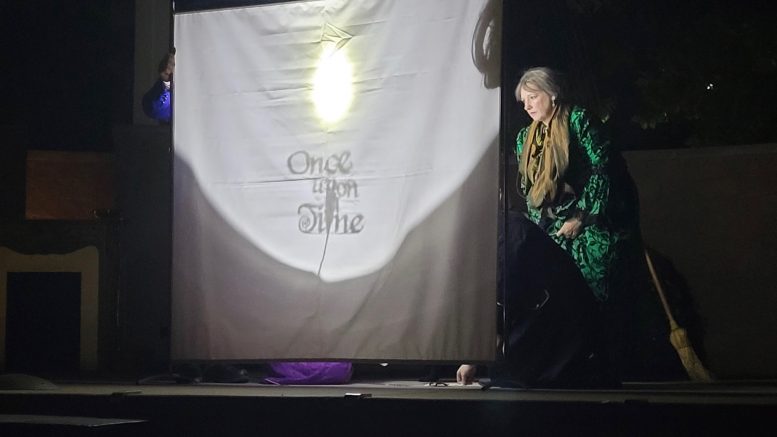 Rachel Rycerz, who plays Cinderella's mother and Little Red Riding Hood's Granny, helps light the shadow puppets at the beginning of the Oct. 9 performance of 'Into the Woods' in Rancho Cordova. Photograph by Casey Rafter

As the pandemic tapers down, Hummingbird Theatre Company is trying to reconnect with audiences

A clutter of colorful condominiums surround Village Green Park in Rancho Cordova. After sundown, white, red, and blue stage lights start casting along its many shapes and sizes, moving down to a minimally decorated cement platform that’s ready to come to life. For most of October, this park in a suburban setting will showcase a community theater working its storybook spell.

For the first time since their sold-out Nov. 2019 musical theatre gala, Rancho Cordova’s Hummingbird Theatre Company is mounting a production of Stephen Sondheim’s award-winning musical “Into the Woods” at Village Green Park, with performances continuing each Friday and Saturday evening until Oct. 23. The company’s creator and director Danielle Mercado is excited staging the show, which is Hummingbird’s first musical. Mercado noted that, traditionally, producing musicals is prohibitively expensive, though in this case the troupe applied for — and was granted — a community enhancement fund through the City of Rancho Cordova.

“Securing the rights took up half of our budget, and our budget was almost nonexistent,” Mercado acknowledged. “We applied for the grant pre-pandemic almost two years ago [and planned] to put this on in October of last year. Because everything was happening, we asked for an extension and they granted it. That’s how it was possible to put this on.”

“Into the Woods” originally premiered at San Diego’s Globe Theatre in 1986 and went on to Broadway in 1988. It was written by Sondheim and James Lapine, a production that musically and comedically weaves together a selection of characters from Grimm’s Fairy Tales.

Jack, of beanstalk fame, plays a central part in the story not only because of his interactions with giants, but because of his close relationship with his pet cow, Milky White. In Hummingbird’s production, local actor Andy Leggett plays the boy with the magic beans.

“It’s probably a top-ten dream role for me,” Leggit said. “People tend to play Jack straight. I think he’s supposed to be funny. One of the big choices I wanted to make is that he needs to be all over that cow throughout the whole show. He gets confused about the gender of the cow, but genders don’t matter. All that matters is his love of that cow.”

In Grimm’s tale Rapunzel, the namesake maiden is kept in a tower by a sorceress. That character is more fleshed-out in “Into the Woods.” She’s named the Witch and lives next to a baker and his wife. Broadway veteran and former Miss Orange County Raquela Burt takes on this role for the Hummingbird performances. Burt, who lived and worked on stage in New York for 18 years, appeared on Broadway as Acid Queen in The Who’s “Tommy.” She’s even workshopped with Sondheim and is now returning to the stage for the first time in 14 years. Recently, she’s been a vocal instructor working from her home in Elk Grove.

“I didn’t realize how much I was going to love it,” Burt admitted. “I love teaching voice. Danielle contacted me and says, ‘Are you nuts? Are you ok? I don’t think you should spend this much time away. You need to be performing. You need to get back on stage.’ Then she mentioned ‘Into the Woods.’ That’s a dream role for me, playing The Witch. I’ve never felt better in my life. This has been very healing for me, honestly.”

Due to a tight budget, Hummingbird Theatre’s production leaves just the right amount of the story to the viewer’s imagination. Mercado’s version of “Into the Woods” employs the use of shadow puppetry to depict scenes that, in other productions, might use more complex effects or elaborate set-design. The puppets were created by Beth Beam, who also plays the Baker’s Wife in the production.

“Theatre is its own medium and, if people are willing to watch it, they’re willing to imagine,” Mercado explained. “It’s an agreement you get into and establish beforehand. I’m trying to think of an audience member who hasn’t seen this and doesn’t know it [like] someone’s dad who got dragged to the show. I want to make it enjoyable for them.”

The open nature of the park leaves the sets built by Mercado and her crew vulnerable during the day. She said that factor, combined with budgeting, made some of the effects the play usually requires difficult or impractical to create.

“For one thing, we don’t have a giant head that we can slam onto the ground,” Mercado went on. “We’re in an outdoor space and have to load in and out each night. It is an exhausting process. It’s 200 feet from my house. We use my garage as storage and people get changed in my living room. It’s very grassroots.”

Leggett wouldn’t call this production the most abstract thing he’s ever done, but he waxed enthusiastically about the combined efforts the cast and small crew accomplished together.

“We don’t have a lot of techs, so the cast members are on [stage moving sets],” he noted. “It’s like, ‘Oh, there’s Cinderella’s stepmother. What’s she doing here.’ ‘Don’t mind me, I’m just here to move a hill. I’ll be out of your way shortly.’”

Burt added, “We’re hoping everybody will help out.” She draws a connection to the message of teamwork that’s inherent in “Into the Woods.” For her, Sondheim and Lapine’s words are meant to instill a need to work together.

According to Mercado, the funds from Rancho Cordova mark a continuing grant, which allows Hummingbird Theatre Company to plan more shows. She said its first production of the year will be similar to the gala it held in 2019.

Be the first to comment on "In Rancho Cordova, a darkened stage finds its lights again with ‘Into the Woods’"