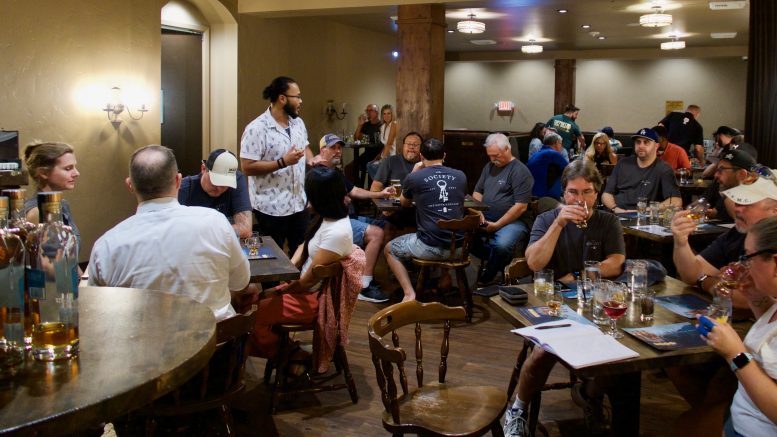 Gian Trinidad, standing, is a rep from Westward Whiskey who recently hosted a tasting event at Monk's Cellar in Roseville, a gathering that was part of the brewery's new whiskey club. Photograph by Scott Thomas Anderson

Roseville brewery to host a big event this weekend, but its bourbon bravado is generating its own excitement

The enigma first manifested itself in Scottish villages and along Ireland’s Wild Atlantic Way before American families spent generations altering its magic in the tree-lined trails of Kentucky and Tennessee. Now, the question of whiskey’s mystique is pouring into the zeitgeist of the West Coast, from old naval ship-building yards in California to the foggy Columbia Gorge of the Pacific Northwest. In the Sacramento area, it’s a brewery that’s actually pushing the appreciation, gathering a new community to explore whiskey’s edifying phenomenon.

Monk’s Cellar first opened on Roseville’s Vernon Street in 2014. It was the brainchild of Paul Gould and Andy Klein, pub fans who’d grown up near the historic avenue. Monk’s made its reputation on Klein’s brewing of top-tier Belgian and English-style ales, some of which are made with open fermentation vats, as well as an elevated bar menu that includes its now-famous duck fat fries with aioli. Yet, all the while, Monk’s was also gradually expanding its whiskey portfolio.

What started as eight or nine bourbons behind the bar has since grown to 70 distinct bottles. That’s made Monk’s more than a popular brewery, but a de facto whiskey haven for South Placer County.

When the pandemic hit, California officials scrambled to help hard-hit restaurants by allowing them to sell to-go drinks and bottles of spirits right over the bar. Last week, Gov. Gavin Newsom signed a bill extending those changes to at least 2026. The upended regulatory environment allowed Gould and Klein to pursue their vision of starting a special whiskey club at Monk’s. The basic idea involves the brewery leveraging its buying power with distilleries and combining that with contributions from a gaggle of whiskey fanatics, allowing all involved to purchase and share limited individual barrels. Some of these casks are procured from historic legacy brands, while others come from smaller, craft-level distillers – but all signal a more authentic doorway to the art of the grain.

“You’re really tasting one-of-a-kind offerings, and not this giant blend of a thousand, or two thousand, barrels,” Klein explained. “When we do these picks, we’re usually tasting five or six different barrels. There are just very distinct differences between each one.”

Monk’s Cellar recently held a club release in concert with the 150-year-old Tennessee whiskey brand George Dickel. Members had purchased a Dickel barrel that was 103-proof and aged for nine years – a rarity in American whiskey – with all that maturation happening at Cascade Hollow Distilling Company in Tullahoma, Tennessee. Andrew Calisterio is a Dickel representative who was pouring and answering questions that night. He says that Klein is right on the money about how different single barrels are from huge commercial blends.

“Basically, a lot of our whiskeys are blended to have a final outcome and profile and flavor, but certain barrels kind of deviate on taste, and with those, we’ll set them aside for private barrel selections,” Calisterio explained. “This whiskey we’re pouring tonight was actually a private barrel, selected on profile, by the guys here at Monk’s in collaboration with their whiskey club. Being able to have a single barrel that isn’t a super cherry-picked profile made to please all kinds, it’s just a very unique expression of this small collection of people and the taste that they lean towards. This barrel is completely poured out, and into that bottle, and that’s it – something you can’t get anywhere else.”

Calisterio added that Monk’s method of incorporating well-known legacy brands like Dickel into its club’s mix is a sound one. “A lot of newer, younger brands that are around, they don’t necessarily have the inventory to offer a barrel that’s been sitting for nine years,” Calisterio noted. “When you’re able to offer something like that, it makes for a deeper conversation on whiskey production.”

Whiskey fans can enter Monk’s club at three different levels of participation and price. In addition to coordinating five-to-six annual barrel purchases and release parties, Monk’s is also using its comfy, spacious brewery to bring members to special whiskey events. On Sept. 23, it got Westward Whiskey to travel down from Portland, Oregon to host an hours-long tasting in Roseville.

“The point of drinking whiskey is friendship and family, and having them around for a lot of the best times – cherishing some of the best thoughts that we have,” said Gian Trinidad, a Westward Whiskey employee who led the tasting. “We make everything in-house. What we make is American single-malt. Only about 10% of people even know what that really is. So, what we’re going to do tonight is go through a tasting, not only of our line-up, but we’re going to go through a lot of information about what American single-malt is, what flavors you’re going to look for, as well as how to appreciate whiskey in general. We’re going to walk you through it.”

A fair number of members left with bottles of Westward. When they returned to Monk’s two weeks later for the Dickel party, they received a bottle from their barrel to take home, a separate bottle to keep at the brewery’s bar, and a grab-bag of other bourbon-related items.

The easiest way to join the whiskey club is by dropping by Monk’s Cellar to speak to any of its bartenders. This weekend, October 15 and 16, might be an ideal time, as Monk’s is ringing in its 7th anniversary with a big Oktoberfest celebration. The brewery plans to turn its calm, cavern-like atmosphere into a German Beer Hall, with a ceremonial “tapping of the 1st keg,” a list of rare Bavarian guest beers, and constant pouring of Monk’s Festbier and a German-style Pilsner that Klein brewed for the party.

There will also be live music from German Oompah party bands, Grand Isle Fire Brigade Band and Cracker Meister, Friday from 6 to 9 p.m. and Saturday from 4 to 8 p.m., respectively.

The Oktoberfest is a chance for some glass-clinking comradery, which, not coincidentally, is the essence of Monk’s whiskey club.

“We’ve got people who come together now and talk whiskey, and bring their family and friends,” Klein said. “It’s just a very cool thing.”

“I think it goes back to the community aspect, which was always a pillar for starting this business,” he recalled. “Beer, food and community was our motto when we opened. With the whiskey club, we want to get enough people together who are like-minded and enjoy tastings, so we can do more things. And it’s great because people are becoming friends. This is the third time we’ve had a release, and you’re seeing everyone saying hello, because they’re starting to get to know each other. It’s just fun and it keeps things interesting.”