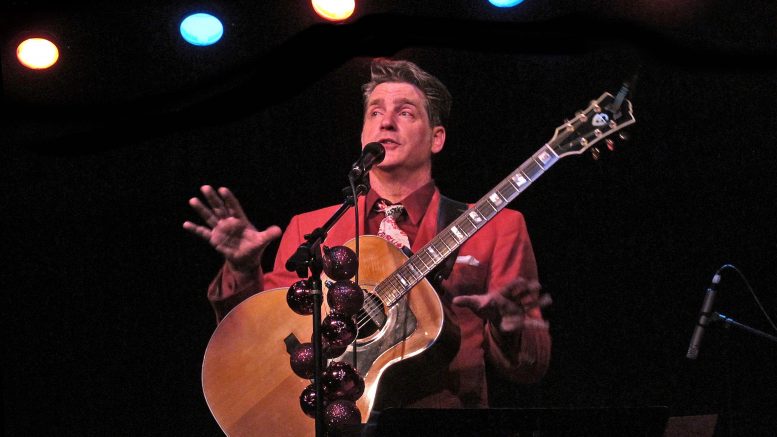 The reek of smoke lingers in the air as gray and white tufts of ashes drift along the southwestern side of Mt. Lassen. After weeks and weeks, the Dixie Fire is still an active monster, having hungrily consumed more than 950,000 acres in its path. Camp Tehama, saddled on the westernmost edge of the fire’s circumference, somehow escaped its smoldering jaws. The camp marks the spot where Antsy McClain and the Trailer Park Troubadours gather annually with their fans for “Woodflock” – an event that all involved refer to as the “Flamingohead Family Reunion.”

Due to fires and the COVID-19 pandemic, McClain hasn’t been able to greet his California fanbase face-to-face for nearly two years. He lives in Nashville but has included venues in the Sacramento region in his tour schedule for decades.

“I do look at California as home,” he told SN&R. “I thought about moving [to the foothills] in 2008 or 2009, when the housing prices were so much better. We played there so many times.”

He added that fires have now “devastated” the rural communities he’s come to love in the area.

Woodflock was last held in 2019, McClain’s tenth year for the gathering. The uncommon dangers of the last 19 months caused him to hesitate and eventually cancel Woodflock’s latest outing.

“I was watching current events, trying to figure out if it was going to be the fires, or this second wave of COVID, to be the first to cause us to cancel,” he recalled. “It ended up being fires. We probably would have ended up canceling anyway because of COVID, but they were neck and neck.”

McClain was more than disappointed in the turn of events. He says, through his music, he’s met the most amazing people in Northern California. Some fans here have attended more than 200 of his shows.

“I can’t think of a band that I would see 20 times, let alone 200 times,” he acknowledged. “They come because of all the other people — the friends — that they get to see again. They like to laugh, and they like the same style of music, and when you share those two things, it’s family. That’s the experience of our concerts and especially the people in the Sacramento area.”

Tom Hay, a fan of McClain’s who lives in Rocklin, estimates that he’s seen the Trailer Park Troubadours perform 75-to-100 times. Hay first got addicted to the music when the band played the Placer County Fair in 2004.

“They were the final act of an 8-hour event benefiting the 20/30 Club,” Hay remembered. Referring to the tendency of McLain fans to cosplay as characters from his songs, he added, “There were a lot of people wearing funny clothes. We sat at a picnic table pretty far away. That was a mistake, because a lot of the fun is with his interactions with the audience. I was transfixed. I’d never seen another show like it.”

McClain and Hay both referred to Troubadour live shows as “family reunions.” According to Hay, McClain even encourages his fans to mark each other as “cousins” on Facebook. The Hay family has been to all 10 of the Woodflock events. They were looking forward to attending the eleventh go-around.

“Last year’s Woodflock was cancelled due to COVID-19: This year, COVID was a concern, but the fires around Lassen made it impossible,” Hay observed. “I’ve been on a couple of [themed] cruises to Kauai, and a ‘Field Trip’ to Nashville [to see McClain and company]. Every show is such great fun. I hate to use the word ‘uplifting,’ but you can’t walk out of the venue without a smile on your face.”

The Nashville field trips McClain hosts and caters with his wife, Deana Lynn. Each trip allows 12 guests to tour the city, a mecca of country music. The package often also includes house concerts and talk sessions with notable Nashville musicians discussing their craft. McClain notes that there were six of those planned from September to November, all cancelled now in the wake of the Delta variant.

Jerianne Van Dijk, a Grass Valley illustrator and on-air host at KVMR FM in Nevada City, has followed Antsy McClain and the Trailer Park Troubadours for several decades. She’s also occasionally interviewed McClain on-air for the regionally popular radio station. Van Dijk has been interested in his music ever since he performed in Grass Valley in the mid-90s. That’s when one of McClain’s CDs first landed in the KVMR studio.

“We were listening to some of the songs and thought, ‘What is this? This is great!’” Van Dijk said. “We’re up in the foothills here. There’s something about ‘trailer park’ that goes with Grass Valley. I’m sure it works all over America.”

Van Dijk describes some of the band’s songs “real strange,” particularly “Aunt Beulah’s Roadkill Overcoat.” She also notes there’s nothing standard about all the audience members costuming-up to mimic song characters at shows.

“People were wearing roadkill jackets – people were dressed like many of the characters,” she mentioned. “And prizes were awarded … The songs are always light, fun, goofy, and hit something in us that we all have.”

Lamenting the decision to cancel tour dates two years in a row, McClain mentions that he hosts Facebook Live events and songwriting sessions. The virtual events are a far cry from his regular shows with attendance upwards of 200 people; but that type of good turn-out is also what forced his hand.

“I canceled everything because, if even one person got sick at one of my shows and died — the worst-case scenario — I don’t think I could ever go out on the road again,” McClain admitted. “These precious people, all close together, huddled, laughing, singing together — and then I go home and hear that it was some sort of super spreader event — I don’t have that many fans that I can afford losing them that way.”

In the meantime, fans like Van Dijk will settle for fond memories of connecting with McClain and his Trailer Park Troubadour music, with a special appreciation of its positive tone. She says he’s a talented songwriter who understands his craft, as well as how to reach an audience, individually and collectively.

“The Trailer Park Troubadours stuff is always funny,” Van Dijk stressed. ”It’s real, like ‘Nothin ain’t right if the trailer ain’t level.’ … His songs find a deep place every time, which is what makes it unique. It’s not just trucker hillbilly songs.”

TOPICS:Antsy McClain and the Trailer Park TroubadoursCamp Tehama in Shasta