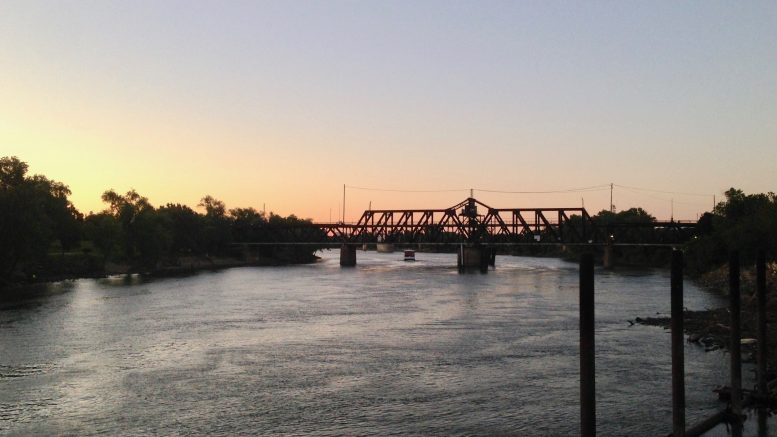 The Sacramento River at sunset. Photograph by Scott Thomas Anderson

For many years, federal, state and corporate proponents of building more dams in California have touted cold water river releases provided by increased water storage behind dams as a key tool in “saving” struggling salmon and steelhead populations.

Yet a just published study by the UC Davis Center for Watershed Sciences, Dams Ineffective for Cold-Water Conservation– 8/25/21, has found that dams are ineffective for the cold water conservation that is needed to preserve imperiled salmon, steelhead and trout.

”Dams poorly mimic the temperature patterns California streams require to support the state’s native salmon and trout — more than three-quarters of which risk extinction,” according to the study published in the journal PLOS ONE by the University of California, Davis. “Bold actions are needed to reverse extinction trends and protect cold-water streams that are resilient to climate warming.”

“It is no longer a good investment to put all our cold-water conservation eggs in a dam-regulated basket,” said lead author Ann Willis, a senior staff researcher at the UC Davis Center for Watershed Sciences and a fellow for the John Muir Institute of the Environment. “We need to consider places where the natural processes can occur again.”

“Understanding where cold water is likely to stay cold is critical for conservation,” according to the study. “But ‘cold’ is more than just a number on a thermometer. The term represents the many factors that combine to create cold water capable of supporting aquatic ecosystems.”

Water managers deliver cold water from reservoirs to streams to support aquatic life, but Willis said this assumes that all cold water is the same — “akin to giving blood to another person without understanding their blood type and health status.”

“While previous studies have suggested that dams can be operated to achieve ideal temperatures, few tested that hypothesis against the temperature patterns aquatic ecosystems need,” the study reveals

The UC Davis study assessed stream temperature data from 77 sites in California to model and classify their “thermal regimes,” or annual temperature patterns. It found the state’s reservoirs do not adequately replicate natural thermal patterns, making them incapable of supporting cold-water species effectively. The study states:

“In stream reaches that lack a resilience to climate warming, cool- and cold-water habitat may be unachievable through dam regulation. In particular, the stable cool regime may present the greatest challenge to cold water conservation as it generally lacks the cooler winter temperatures of unregulated variable cool regimes. One notable result was the classification of the Shasta Dam outlet (site SHD)–the only reservoir to produce a stable cold thermal regime. At 4.6 million acre feet (MAF), Shasta Lake is California’s largest reservoir and maintains its cold pool through cold-water inflows, cooling that occurs during the winter, thermal stratification, and operational decisions [38]. Despite the large capacity of New Melones (2.4 MAF, 4th largest reservoir in California), it, or any other dam included in this analysis, was unable to produce a stable cold regime at its outlet.”

In response to the release of the study Barbara Barrigan-Parrilla, Executive Director of Restore the Delta said, “We feel validated when top-notch university science programs prove what our community science researchers find. The Delta Conveyance Project is predicated on increased dam capacity. But increasing dam capacity won’t provide the cool clean water we need to restore the Delta. Climate change demands bold new solutions for water management and a reckoning of how much water we allocate for industrial ag.”

“Empty dams and a dry tunnel will not solve our problems. We predicted in 2014 that Prop 1 funds for dams would not work, and legislators would not listen. We hope those funds are rerouted for meaningful water projects that will serve all Californians,” Barrigan-Parrilla concluded.

The release of the study couldn’t come at a more grim time for imperiled salmon and steelhead in California. The California Department of Fish and Game (CDFW) has forecasted that nearly all of the juvenile winter-run Chinook hatched on the Sacramento River this year could die before spawning, due to disease spurred by warm water conditions below Keswick Dam: sacramento.newsreview.com/…

A record run of over 18,000 endangered spring-run Chinook salmon on Butte Creek, a tributary of the Sacramento River, has also turned into disaster as 14,500 fish have to date died before spawning. These fish also have perished due to the outbreak of disease in warm, low water conditions: sacramento.newsreview.com/…

The only good news is that the rate of mortality has slowed down after more water was finally released by PG&E down the creek on August 3 and conditions improved. “Many fish are still hanging in there,” reported Alan Harthorn, Executive Director of Friends of Butte Creek.

As adult fall Chinook salmon return to the Sacramento River and its tributaries, they will face warm water conditions and low flows, potentially spurring an outbreak of disease that would kill many fish before they are able to spawn.

Disaster has also hit the Klamath River, where nearly all of the juvenile fall Chinook salmon perished before making it to the ocean on their downstream journey this spring and summer, due to a breakout of the C. Shasta disease in the fish, according to scientists from the Yurok and Karuk Tribes: www.counterpunch.org/…

Ann Willis, the study’s lead author, says the solution to creating cold water habitat to stop the extinction of salmon and trout populations is to remove dams and restructure water management in California.

“I’m an engineer; I thought we could operate ourselves into success, but the science doesn’t support that,” Willis said. “It’s not a question of whether we remove a dam, but which dam, and how we need to restructure how we manage water. Or we need to be willing to take responsibility to be the generation that says, ‘OK, we’re letting this ecosystem go extinct.”

Be the first to comment on "U.C. Davis study finds dams ineffective for conservation of salmon and trout in Sacramento-area waterways"